One of the benefits of cannabis legalization is the growth of cottage industries serving the food chain. One such business adapts vehicles for use transporting products and cash safely and securely among cannabis companies. It’s a vital component of the cannabis ecosystem that surely will see exponential growth even after the state removes the need to convey large amounts of cash. The necessity to transport product among myriad businesses and then to retail outlets will continue unabated.

Ontario, California-based Quality Coachworks was founded forty years ago, long before cannabis legalization began in earnest, but the company has provided vans to the industry since 2013, when the first of its cannabis-specific conveyances was introduced. The business is owned and operated by Dominick Vitelli and his family, and according to its website, “specializes in the design and building of stretch limousines, luxury hearses, custom coaches, armored vehicles, limo buses, and executive vehicles. We also do specialty services such as bulletproofing, ballistic armoring, custom upholstery, and redesigns of existing conversions.”

A few years ago, Vitelli’s friend Seth Doulton brought him an opportunity. Doulton, who had built specialty vehicles, custom cars, and monster trucks for the automotive aftermarket since 1973, also worked for the State of California. “I’ve been working with Fiona Ma, chair of the California State Board of Equalization, for ten years,” Doulton explained. “One of my first job assignments with her was to find out all I could about the vibrant cannabis industry.”

It did not take long for Doulton to identify a need unaddressed in the market. “One of my first trips was to Denver, Colorado, to meet with state officials and stakeholders about their cannabis industry,” he said. “While on the trip, I saw cannabis being delivered in repurposed armored trucks, like Brinks trucks. On the flight home, I kept thinking there’s got to be a better way. These large trucks have a lot of issues, including heavy bodies and expensive upkeep. They also have built-in features that cannabis delivery does not need, and they don’t have the dozens of security features state cannabis regulators require. Not to mention, they’re expensive and hard to finance. On the flight, I put together a list of what I thought was needed for secure transport of cannabis products.

“With the help of a good friend [Vitelli] who’s been in the custom specialty car business for over thirty years and has developed security vehicles and limousines for people all over the world, we created the Canna-van,” he added.

Thus began a partnership that now produces a majority of the secure transport vehicles relied upon by California cannabis businesses.

Doulton designed two basic models depending on the client’s transportation needs. “In 2013, we introduced the Transit Connect, a small van built by Ford. These vans come with over fifty modifications, like insulation, temperature control, camera systems, full-time GPS tracking, LoJack, and security doors,” he said. “We can produce these vans in seven to ten working days, depending on the modifications. They start at just under $50,000 each.” 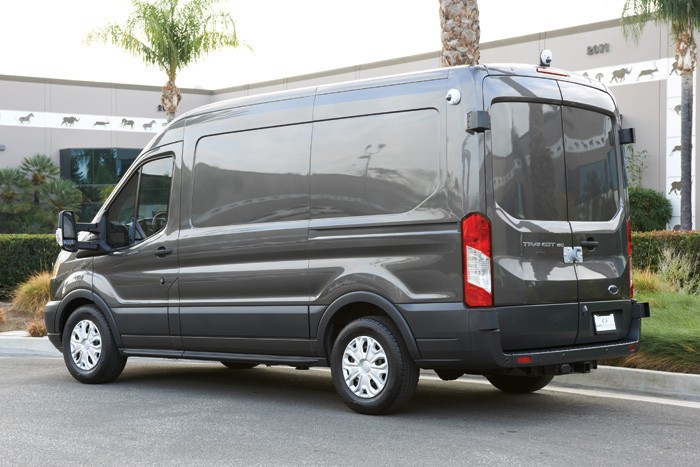 In 2014, the company introduced larger transit vans with a larger wheelbase and a stand-up roof. “These security vehicles can include all the same modifications as the smaller version, plus many more,” explained Doulton. “They start at just under $60,000.”

Quality Coachworks swears by its Ford vans, which Doulton said are easy to lease or
purchase, with options for interest rates when clients decide to finance a model. “A lot of the delivery vehicles that Quality Coachworks produced have been on the road for almost three years with hundreds of thousands of miles on them, and they are still running strong,” said Doulton.

Original equipment manufacturers’ factory warranties are available, and the quality of the conversions provides other benefits, according to Doulton. “One thing the distributing companies really like about these security vehicles, as well as the insurance companies, is that each different cabinet in the van is digitally controlled and the driver never knows the combination until he shows up at the dispensary,” he said. “There’s no real liability to the driver as far as product loss.”

That attention to detail extends to the future needs of the industry. “Quality Coachworks spends a lot of energy watching all the different state regulations and [U.S. Department of Transportation] rules, so we can update our vehicles to exceed anything any state would consider,” said Doulton. “We are very proud that every police chief and Highway Patrol agency official that reviews these vehicles has given them a thumbs-up.”

The company is seeing interest in the vehicles from different parts of the industry. “The largest percentage of the security vehicles are going to distributors, but growers are now coming forward who want to transport their product in a secure way,” said Doulton, adding that all security delivery vehicles can be outfitted with armored windows and doors for driver protection.

“We have quite a few distributors adding to their fleet every year,” he continued. “Since November of last year, right after the [California] emergency regulations were released, things have really taken off Everybody felt comfortable about ordering them.”

The company primarily serves West Coast clients, but that may change soon. “Most of our security delivery vehicles have been delivered to customers in California and Oregon,” said Doulton, “but with other states coming on all the time, Quality Coachworks is looking forward to marketing its vans in other states.”