Before Anthony Vernaglia co-founded Elem·n·tal in early 2015 he worked for a London fund that managed a portfolio based on previously locked-up assets. When he realized he’d rather create something than continue to shuffle existing value, he launched SiRV Interactive, providing digital display systems to the hospitality industry. The company, a precursor to Elem·n·tal, was a modest success.

“The hospitality industry is a very crowded space,” said Vernaglia, 30. “I grew up an athlete and played at the college level, which was subject to strict drug testing. That, combined with the fact that I had never been into smoking, kept me away from dispensaries. We got lucky, though, in that we met up with someone in Las Vegas who had both a bar and a dispensary. He inadvertently thought of bringing the [digital display] technology over into the cannabis space by requesting the system be installed in his dispensary.”

The technology was never intended for dispensaries, but the parallels were clear. Only slight modifications to transition from one market to another. Rather than trying to squeeze a square peg into a round hole, Vernaglia asked the bar and dispensary owner exactly what kind of system would satisfy his requirements for both operations.

“With that kind of input, we tore down the old hospitality-oriented software and rebuilt a brand-new product aimed squarely at cannabis,” said Vernaglia. “It worked out wonderfully. And because of the way we started out, we’ve incorporated that feedback philosophy into our design model. Everything we build is based on large amounts of feedback from customers and prominent people in the cannabis industry.” 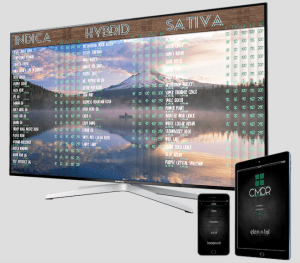 Elem·n·tal Digital provides highly flexible, dynamic, and eye-catching menu systems that can be customized to address virtually any needs. The systems create atmosphere and enhance customer experience. In addition, they add efficiency to the sales process because they can be changed on the fly in real time from anywhere using anything that connects to the internet. In an industry that is becoming increasingly mainstream, the novelty of the plant will wear off. People will return to a retail establishment for the “experience.”

“That’s where Elem·n·tal comes in,” Vernaglia said. “We’re working on efficiency-boosting interfaces with some very prominent partners in the space, including seed-to-sale software, point-of-sale systems, and online entities.”

Currently, Elem·n·tal menus are in forty-three dispensaries in four states-California, Oregon, Washington, and Nevada-and the company has logged consecutive months of increased sales. Elem·n·tal works in multi-display formats. Most shops have multiple systems and most systems have multiple screens,.

“It’s one of the things that really separates us,” Vernaglia said. “I’m not talking about a couple of TVs spread out around the shop. I’m talking about multiple screens that can work in concert or individually and switch between both fluidly. It’s also built to be flexible. That means changing anything and everything: text, fonts, colors, images, backgrounds, banner ads, and even a YouTube playlist.

“We’re always developing and trying to find new ways to boost efficiency,” he continued. “We’re working with Leafly to integrate the two platforms together. We’re in talks with GreenBits to do the same thing. Because of the way we started out, we seek feedback from customers and industry rock stars and work that feedback into religiously scheduled quarterly major software releases with a few minor ones sprinkled in between.” 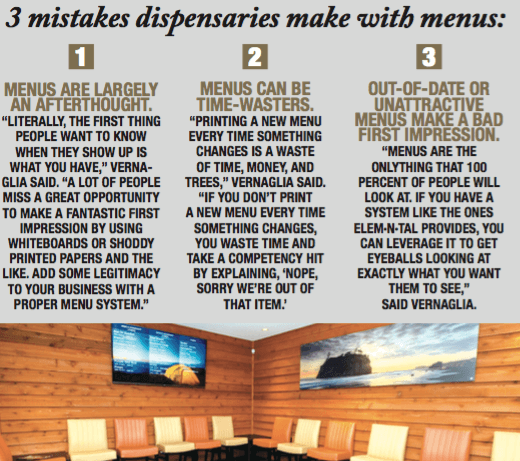