A recent article in the Staten Island Advance newspaper started with a seemingly random Billy Joel reference: “A bottle of red. A baggie of weed.” As New York state moves ever closer to legalizing adult-use marijuana, this scene from a cannabis-infused Italian restaurant represents a more modern New York state of mind, indeed. But what follows this tongue-in-cheek lede is a disturbing trend we’re starting to see more and more as the commercial cannabis industry continues to expand.

As the Advance reported: “As lawmakers in Albany draft a bill to legalize adult use of marijuana, a coalition of wine and liquor store owners is campaigning for the right to stock their shelves with the product. Organizers of  The Last Store on Main Street (LSMS), which recently fought to keep wine out of grocery stores, said the effort is motivated in part by the fear of losing business.”

Liquor stores wanting a piece of the legal marijuana pie are nothing new. From the live-free-or-die beauty of northeastern New Hampshire to the laid-back chill of California’s southwestern-most city San Diego, the conversation about liquor stores retailing adult-use cannabis is common. In fact, the same debate rocked Canada more than a year ago. As I wrote for The Daily Beast in August 2017:

Some Canadians are already envisioning a future in which a quick stop at the liquor store could net a bottle of wine for dinner, a six pack for the weekend, and a couple eighths of BC Bud. While most of the legal world has opted to sell retail weed in pot-specific storefronts, aka dispensaries and pot shops, British Columbia and other provinces are being urged by liquor store owners to sell marijuana inside existing liquor stores.

While some of the alcohol-centered coalitions make solid points about controlled sales of regulated substances, the truth is beer and Blue Dream sales should never be co-located.

There are plenty of valid arguments against proposed co-located sales. On one hand, co-location potentially could lead to more co-use, and most governments in 420-legal municipalities argue the co-use of marijuana and alcohol will only increase intoxication and “run counter to public health objectives of harm reduction and prevention,” as the Canadian government’s cannabis task force wrote.

Others argue a liquor-store-centric retail and distribution model robs the fledgling cannabis industry of an independence for which it has fought for decades—a dynamic made more tumultuous given the alcohol industry’s reluctance to support decriminalization and legalization initiatives throughout the United States and Canada.

Those are valid points. But only one argument against co-locating weed and wine sales really matters to me.

After nearly eighty years of unjust prohibition, the world’s top medical authorities now are throwing their considerable weight behind cannabis as a medicine. From the esteemed National Academies of Sciences, Engineering, and Medicine to the standard-setting Journal of the American Medical Association, from the world-famous New England Journal of Medicine to the intensely selective U.S. Food and Drug Administration, the world’s most legitimate medical authorities and organizations are verifying what millions of medical marijuana patients have been shouting from the rooftops for decades.

Cannabis and its many components, cannabinoids and terpenes among them, have proved effective in relieving symptoms tied to multiple sclerosis, cancer and chemotherapy, epilepsy, chronic pain, and other conditions. 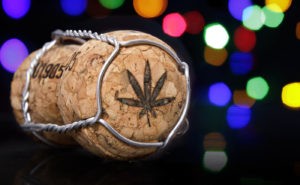 The list will absolutely, 100 percent, continue to grow as more research is done.

Meanwhile, alcohol is not a medicinal substance. To boot, beer, wine, and liquor are all toxic—meaning, specifically, “containing or being poisonous material especially when capable of causing death or serious debilitation,” in case you’ve not thumbed through Merriam-Webster recently.

Which expands on my initial thesis: While cannabis is medicine, alcohol is not. And while alcohol is deadly, killing nearly 80,000 Americans each year, cannabis is not. (Weed’s annual death count in this country and others stands at 0.)

Even the National Institute on Drug Abuse (NIDA)—a federal department whose job it is to study drug use and addiction, and an organization that has a history of funding only cannabis research that explores the dangers of marijuana (and not its benefits)—says so. On NIDA’s Drug Facts page for marijuana, the National Institutes of Health division discusses the known short-term and long-term effects of cannabis use. Under the subhed “Can a person overdose on marijuana?” the Institute explains:

An overdose occurs when a person uses enough of the drug to produce life-threatening symptoms or death. There are no reports of teens or adults dying from marijuana alone.

Yes, many marijuana consumers buy at recreational dispensaries, but a number of consumer studies have shown regardless the actual retail storefront—be it a medical dispensary or a recreational pot shop—most cannabis consumers turn to marijuana as a wellness and medicinal tool.

To help them sleep. To quell their anxiety. To inspire their appetite. To ease their pain.

No doubt, alcohol takes the edge off. But it lacks the medical benefits of cannabis, and its deadly toxicity and steeper rates of addiction place it in a category of its own—a distinction that emboldens the notion that marijuana deserves its own physical storefront.

Because, again, marijuana is non-toxic. And that’s an all-important differentiator, whether you’re coming out of the cannabis closet to your family or debating the issue of co-located marijuana and booze sales.