A recent poll conducted by Marijuana Business Daily analyzed voter preferences for President of the United States among cannabis industry executives, investors, and the general public.

As it stands currently, Hilary Clinton seems poised to be the choice of those working in the cannabis industry.  She led Trump by a margin of 43%-26% among this demographic.  Libertarian candidate for president and long time legalization advocate, Gary Johnson, was supported by 15.5% of cannabis professionals.

The numbers were slightly different for cannabis industry investors.  Venture capitalists supported Clinton by a margin of 46%-38%.  Gary Johnson was only supported by 8% of this group. 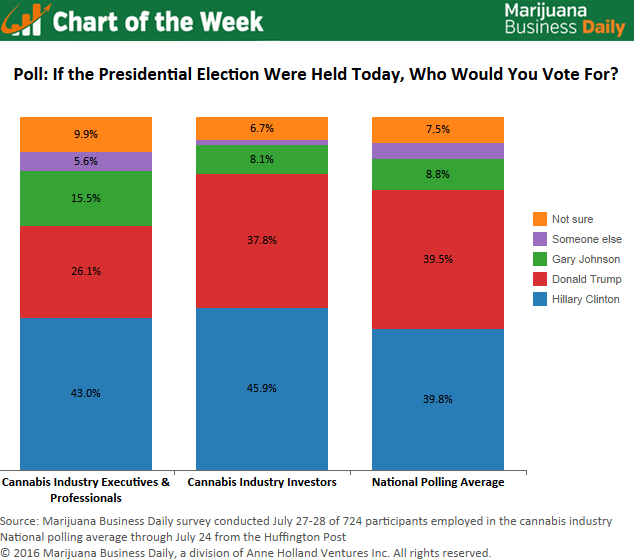 When the study was being conducted it seemed that the cannabis industry’s support was significantly higher than the general public.  This seems to have changed considerably in recent weeks.  The Marijuana Business Daily poll surveyed 724 individuals that were either investors or cannabis professionals.  They used a Huffington Post national polling average from July 24th as the general public portion of the study.  This polls suggested only a .3% advantage for Clinton at the time among votes not associated with the cannabis industry.  With a post Democratic National Convention bump for Clinton and repeated controversies for Donald Trump since the July 24th polling average, the general public’s support for Clinton has risen significantly.

As of August 9th, Real Clear Politics has Clinton ahead by 7.7% when averaging out all recent polls.  These current numbers show a much smaller gap between the sentiments of the general public and the cannabis industry  on the election.

Although Donald Trump famously said he wanted to legalize all drugs in the 90s, he has sent much more mixed signals recently.  Responding to a question posed from Bill O’Reilly Trump said “There is another problem. In Colorado, the book isn’t written on it yet, but there is a lot of difficulty in terms of illness and what’s going on with the brain and the mind and what it’s doing. So, you know, it’s coming out probably over the next year or so. It’s going to come out.”

Hilary Clinton has recently stated her support for rescheduling and opening up pathways for research into the benefits of medical cannabis.  The DNC has adopted a “pathway” to legalization  in the party’s platform.

Marijuana legalization for both medical and recreational use is supported by a majority of Americans.  If the issue receives national attention as we approach the November election it may be possible that Clinton widens her lead.