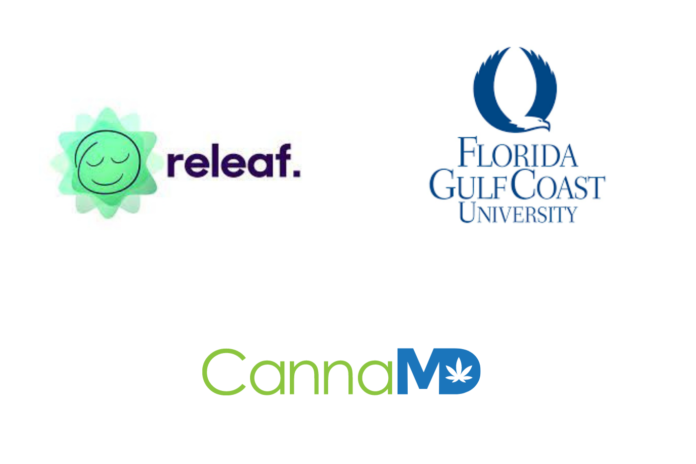 ORLANDO, Fla. — While multiple peer-reviewed studies have established the efficacy of medical marijuana in treating anxiety, far less is known about the specific ratio of cannabinoids that works best to alleviate anxiety symptoms. A new study – led by Florida Gulf Coast University (FGCU), Releaf App, and CannaMD – aims to shed light on the subject.

The newly launched study will track patient-reported experiences while consuming medical marijuana purchased at dispensary locations across the state. Participants may receive an Amazon gift card worth up to $250 for consideration in the study.

Eligible study participants will use technologies developed by MoreBetter (dba Releaf App) to answer standardized anxiety-related questions via a smartphone for a 45-day period to track details of their cannabis use and associated outcomes related to symptom relief and side effects. MoreBetter technologies are widely used by researchers, healthcare professionals, and cannabis product manufacturers to collect data on the performance of cannabis and CBD products, as reported by cannabis patients and consumers.

“Given the increased anxiety and stress that has been reported over the past few years, this is a timely study,” says Tyler Dautrich, COO of MoreBetter Ltd., the company behind Releaf App. “Working with groups like FGCU and CannaMD enables us to collect localized real-world data outcomes, which will ultimately help improve the experience for registered cannabis patients in Florida.”

Representing one of Florida’s largest networks of medical marijuana physicians, CannaMD’s Chief Medical Researcher, Jessica Walters, agrees: “Identifying specific CBD/THC ratios that work best for anxiety is a critical area of study with immediate real-world applications for a large percentage of the patients we see every day.”

“Approximately one-third of Americans will suffer from a significant anxiety disorder at some point in their lives, and many turn to medical cannabis to alleviate their symptoms. This study will expand our knowledge on the effects of medical cannabis on symptoms of anxiety, patient patterns of use, and the correlation of medical cannabis with other anxiolytic drugs and practices.”

This study marks the first in an ongoing collaboration between FGCU, Releaf App, and CannaMD to advance medical cannabis research in the state of Florida and contribute to evidence-based literature regarding the use and efficacy of cannabis products statewide.

Since Florida Gulf Coast University opened its doors in 1997, it has been a leader in quality education, cutting-edge research, and service to the community. FGCU was one of the first universities in the nation to offer a multidisciplinary, undergraduate program of study in cannabis. FGCU is also the home of CREW—the cannabis research, education, and workforce initiative, which is committed to the dissemination of scientifically-valid data, academic excellence, and guiding the next generation of business leaders in the cannabis field.

As one of the largest networks of medical marijuana physicians in Florida, CannaMD is committed to providing compassionate care to patients through evidence-based application of medical cannabis research. Centered around education, empathy, and exceptional customer service, CannaMD offers an unparalleled patient experience – empowering Florida residents to pursue a better quality of life. For more information, see: CannaMD.com.