Cannabis and chocolate combined have long been a muse for artists like author and baker Alice B. Toklas, whose famous brownies produced “euphoria and brilliant storms of laughter, ecstatic reveries, and extensions of one’s personality on several simultaneous planes,” as described by an unknown twentieth-century scholar.

“There’s deeper understanding of the synergies between cacao and cannabis,” said VCC Brands founder and Chief Executive Officer Kenny Morrison, evoking the magical blend. He’s been listening to that sweet muse for a long time, and was one of the first to introduce the sought-after treat to market with the pioneering 4.20 Bar. 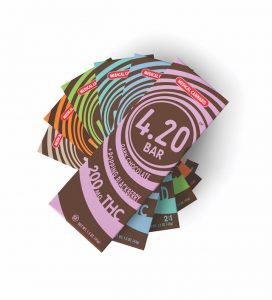 So, in April, VCC Brands celebrates 4/20 with a branding redesign and increased dosage for their best-selling chocolate flagship. The new packaging is sleek, shiny, and easy to distinguish, in six different varieties: milk, dark with sea salt, dark chocolate with CBD, hempcrunch, and popping blackberry.

“The design has a fun look for those who want something classic but a little less stuffy,” Morrison said.

“We just went from 180mg per bar to 200mg per bar,” he said about the new dosage. “When we started making chocolate in 2009 or so, the benchmark was the Hubby Bar—the strongest edible on the market, period… 180mg of THC was a fantastically high THC count for an edible back then.

“These days 180mg of THC is fairly low and unremarkable. So, we decided to up the ante and provide a better value: over 10 percent more medicine and 50 percent more chocolate, without raising the price. This also helps the new bar have a bigger profile or silhouette on the shelf to compete with Kiva and the others. It’s our iPhone Plus moment.”

Morrison has seen and learned a lot after more than a decade in the business, and it hasn’t always been smooth sailing for the VCC gondola. A raid in October 2015 resulted in stormy setbacks and challenges for the company. That said, over the years VCC Brands has added diverse products to their roster, including tinctures, topicals, and beverages.

“We have a broader product spectrum; the best overall product line in the business by far, in my opinion,” Morrison said. “So, when we return to our 2015 store counts we will be doing really, really well. This industry has taught me patience. Sort of. Ha!”

Anyway, he’s not sitting around while he waits. What’s up with VCC Brands in the not-too-distant future?

“A medicinal vape collaboration with the best in the business, terps—strain-specific—and great custom hardware; reliable, repeatable results,” Morrison said. “We’ll keep refining and expanding our offerings. By summer, we’ll have a good understanding of what the state [regulations] will look like, so we’ll turn our attention to generating adult-use packaging—more intently than we already have.”