Consumption cannabis culture has a reputation historically aligned with sharing and community, cooperation versus domination, and environmental consciousness. It’s no surprise the production side of the industry often displays a conservationist or ecologically “woke” viewpoint, as well.

As we strive for carbon-neutral or carbon-minimal solutions, we’re discovering many solutions are not as revolutionary or good for the environment as once we believed. Hybrid cars have a larger carbon footprint than diesel vehicles. Windmills often have a larger footprint than other means of generating electricity because of the materials required to make and transport them. In places that aren’t sunny, scrubbers that release water vapor and carbon dioxide have been installed in power plants as a way to reduce carbon emissions, only to have coal-powered energy generation move to a country that produces a dirtier output, like Mexico.

A discussion about CO2 is subtly different from a discussion about “pollution.” Particulate pollutants, with heavy metals and toxins that can damage living creatures—as one might see, say, in Beijing—is quite different from the odorless, colorless, trace element CO2, which happens to feed the very plants that give us breathable air.

We want to maintain balance but, as a function of power produced, solutions that take the CO2 issue head-on, like natural gas, can be more environmentally friendly than alternatives.

In 2017, Southwest Energy Efficiency Project estimated three-quarters of Colorado grow operations were indoors, and electricity composed 20 percent to 50 percent of their operational costs. Indoor grow operations draw about 150 kilowatt hours of electricity per year per square foot. New Frontier Data estimated cannabis cultivation operations drew enough energy in 2018 to power 92,500 homes for a year—a population the size of Anaheim, California. The same research calculated CO2 emissions from legal grow operations will double between 2017 and 2020, from .47 million tons to .94 million tons.

Emissions are likely to get much larger after that. According to New Frontier Data, the market for legal cannabis was $9.8 billion in 2018 and, conservatively, will increase to $23 billion by 2025. Production volume will increase to support the demand. It’s imperative cultivators begin adopting technologies and innovations that increase operational efficiency, lower their environmental footprint, and decrease costs. Natural-gas-powered microturbine generators like those provided by MBS Engineering and others may be part of the solution.

Natural gas microturbines are modular power stations that use combustion of cleaner-than-coal natural gas to generate electricity. While primarily indicated for greenhouses and grow rooms with heavy, around-the-clock UV lighting and climate-control needs, they also are suitable for production and manufacturing operations that are, or prefer to be, off the grid. More cultivators than ever are seeking off-the-grid power sources after an electric utility’s aging infrastructure was implicated in the devasting fires that cost California growers millions of dollars in 2018.

Natural gas is more disaster-resistant than electricity delivered through above-ground transmission lines. Only during major seismic activity does the Federal Emergency Management Association advise utilities to shut down natural gas service. In addition to being protected from impact interruptions because they travel underground, gas systems are designed with bypass lines to prevent cessation of fuel delivery if one line is blocked or broken.

Natural gas already contributes about 50 percent of electrical power plant output. But the method is inefficient: Much of the energy generated is lost to “distribution bleed” and wasted heat before it reaches end-users. Think of it like the heating system in a car: The front part of the cabin—three feet from the heat source (the engine)—warms quickly, but transmission efficiency drops dramatically on the way to the back of the vehicle. In part, that’s because energy, in the form of heat, escapes around windows and doors and other chinks and isn’t recaptured. In other words, it’s wasted.

The combined heat and power (CHP) of grid electric is only about 30-percent efficient after waste heat and line bleed are figured. In contrast, the shorter transmission distance of on-site-generated power can raise CHP efficiency to about 90 percent. To get the same amount of end-user power from the grid would increase carbon footprint by about 300 percent. Because turbines allow growers to generate electricity on-site, they can lower the cost per kilowatt hour.

Natural-gas-powered microturbines are relatively new in agricultural applications, but they’re gaining ground because they’re efficient, meet stringent environmental standards, and provide more power at less cost than the electrical grid. They may not be a good fit for every grow, and they won’t solve all the world’s environmental problems, but they’re certainly worth a look. 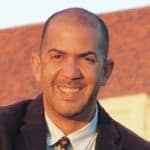 Zackery West is a University of California, Berkeley, alumnus, author, and entrepreneur who provides content consulting services to MBS Engineering through his company, FlashPointLabs. He is writing The Paleo Workplace: How Humans’ Evolutionary Niche Is Nowhere Present in Corporate Culture.