If Raphael Mechoulam’s life’s work hadn’t focused on a globally prohibited and vilified plant, his might be a household name today. As the first scientist to isolate CBD and THC in the early 1960s, Dr. Mechoulam became a folk hero in the underground cannabis sphere—a status with which he is clearly uncomfortable. But it was his subsequent contribution to discovery of the endocannabinoid system—implicated in an entire spectrum of health and disease states—that is his crowning achievement. Yet even today, decades after its discovery, the endocannabinoid system remains largely under the radar within the mainstream scientific community. We can only hope prohibition surrounding cannabinoid research will end in his lifetime, and the octogenarian scientist will receive his deserved recognition.

Mechoulam was born in Bulgaria in 1930 into a distinguished Sephardic Jewish family. With the outbreak of WWII, the family was uprooted, and his father was sent to a concentration camp. After the war, the reunited family emigrated to the newly established State of Israel. Young Mechoulam’s formal education, severed during the war years, resumed with his study of chemistry at Hebrew University in Jerusalem.

As a young biochemist, Mechoulam was intrigued to discover that, while active compounds from poppies and coca leaves long had been isolated and exploited, the cannabis plant remained relatively untouched. If cannabis was an unopened book, he was determined to crack it.

With his facility with languages, Mechoulam was able to read obscure nineteenth century scientific papers on cannabis in German, French, and Russian. More contemporary scientists had identified key components of the cannabis plant, but their vision was limited by the technology of their times. Mechoulam, however, had access to an early version of a nuclear magnetic resonance (NMR) spectrometrometer, which could separate the large number of constituents in cannabis.

Historically, cannabis was integral to Middle Eastern culture, and it wasn’t difficult for Mechoulam to obtain a hefty sample of smuggled Lebanese hashish from the police for analysis. Supported by a team of collaborators, he made history by isolating both CBD and THC, the two main cannabinoids (a term he coined) in the cannabis plant.

The availability of these cannabinoids in their purified form enabled Mechoulam and other researchers to locate the receptors they trigger in the brain and eventually identify similar endogenous cannabinoids produced in the human body. These findings led to the elucidation of the endocannabinoid system, now recognized for its role in a wide range of bodily functions from sleep and pain to inflammation and appetite. The groundbreaking discovery opened an entirely new field of cannabinoid research with profound and widespread therapeutic potential. In 2007, Mechoulam predicted: “I believe the cannabinoids represent a medicinal treasure trove which waits to be discovered.”

Now in his late eighties, Mechoulam continues to blaze the cannabinoid research trail, and his laboratory at Hebrew University is a lively hub of international collaboration. I had the opportunity to meet him there one blustery winter afternoon, where, in fluent English and with a wry sense of humor, he discussed his life’s work and focus on the future. 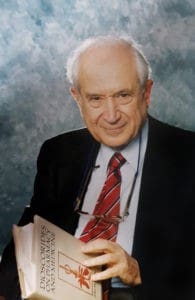 What are you working on in your lab these days?

We work on several topics. One of them is the large cannabinoid field. About fifty years ago, in collaboration with friends, we identified many of the major constituents of the cannabis plant and their structures. But that’s old stuff.

We still continue to do a little bit of work in that area with new compounds. For example, the cannabis plant does not produce THC or CBD; these are secondary products. It produces acids, which are not stable and therefore have not been investigated thoroughly.

So, we decided to go back and look at one of the acids, CBD acid, and stabilize it—a simple chemical process. We asked some of our friends to test it, and they found it is a very potent compound. We don’t know to what extent it parallels the activities of CBD, but [in rats] it acts on depression. We have published a paper or two on the acid and continue exploring that line of research.

The work on the plant material was more or less completed thirty-five years ago. But one thing was not known at that time, and that was the mechanism of action. A friend of ours found and published that there is a cannabinoid receptor in the brain [that is activated by THC]. We surmised these receptors don’t exist in our brain just because a plant produces compounds that activate them. This led us to look inside the body to find similar compounds that target those receptors. So, we looked at compounds our mammalian body produces and found two: anandamide and 2-AG. There has been a lot of work by our group and other groups around this.

Now, our body is lazy, and if it knows how to do something, it will use the same mechanism to make additional compounds so it doesn’t have to waste energy. The mechanism that is used for synthesis of anandamide involves the binding of a fatty acid to a derivative of an amino acid, and our body has a lot of fatty acids—about twenty—and a lot of amino acids—also about twenty. So, you have many possibilities there. Our body uses this mechanism to create many additional compounds which are “anandamide-like compounds.” And this is the third phase. Our present work is mostly involved in studying anandamide-like compounds which the body produces.

Our body doesn’t make these compounds because it has nothing else to do. It makes them because they are needed. So, we looked at compounds of this type and we found, for example, two of them mitigate damage to the brain. If the brain is injured, our body tries to lower the damage, and it produces one of these compounds, and we have published that… This is a major thing because, after all, a lot of people get concussions, particularly in the U.S. where kids are sent to play football.

Then we looked at additional anandamide-like compounds, and it turned out that one was useful against osteoporosis. You see, I like to read all kinds of irrelevant papers. There was a paper by a Greek group that said women in the Mediterranean region have less osteoporosis than women in the northern regions. And they said it was because of olive oil, which contains oleic acid. So, we took olive oil, removed the oleic acid, and tested it, and nothing happened. Then we thought maybe our body makes a derivative of oleic acid. So, we worked very hard on that, and ultimately, we found the derivative—an anandamide-like compound—which most definitely is a very potent anti-osteoporotic compound.

Women over the age of 50 to 55 have hormonal changes that cause all kinds of problems, one of them being osteoporosis. One would think all women should have osteoporosis, but they don’t. And the reason is because they seem to be making this particular anandamide-like compound, and it works against osteoporosis. So, we worked pretty hard on that.

Just to complete that, we also have an interest in addiction. I was a little bit surprised that, with addiction, essentially all research is done on the addicted people or addicted animals and not on those that do not get addicted. Our body, our brain, looks at addiction as a disease. And if it finds there is a disease, the body will try to find a way to fight it. We have an immune system that fights disease. We have all kinds of constituents in our bodies that fight diseases—so why not addiction, if it is a disease?

We decided to look at the possibility that our body has a way to try to fight addiction. And, indeed, there isn’t a single compound that causes everyone to become addicted. Many do, but many don’t. So, we started looking and again we read all kinds of strange papers. There was a paper from about ten years ago about a person who was strongly addicted to tobacco, who was in a traffic accident, and a part of his brain was injured—and then he was no longer addicted.

Since nobody volunteered to have his brain damaged—very strange—we took mice and caused damage to that particular part of the brain. In this case, it was a collaboration with a group from the U.S., in Richmond, Virginia, a group from Canada, and a group from Italy… And we found that, when injured, that part of the brain in mice produces an anandamide-like compound that blocks nicotine addiction and also blocks the withdrawal symptoms both of nicotine and of heroin.

So, we are working on addiction now, and this is what we call the third stage of cannabis research. The first stage was phytochemistry, the second the anandamide work, and the third is anandamide-like compounds that do all kinds of things.

It so happens that we are working in a field where very few people are involved, and we are happy to be alone in that. They will be, in ten years’ time, but not yet.

Over the course of your long career, what thing was most exciting or made you proudest or most pleased?

I’ll put it in a different way. Probably my most important contribution to science has been the discovery of anandamide and the endogenous cannabinoids, which have been shown to be of extreme importance to us. More than the identification of THC and so on, which is important, but is still just a plant.

So, the plant was really just the means that helped you arrive at something much larger.

Well, like any major thing in science, it goes from stage to stage. I look at anandamide as the second stage and the anandamide-like compounds as the third stage. But those are just definitions.

Do you feel like this is the tip of the iceberg?

The United States has now discovered CBD, and people are touting it for every condition you can imagine.

Isn’t there a saying that money is the root of all evil? If people can make money out of something they don’t know anything about, what’s wrong with that?

I have to ask the gentleman who first isolated CBD: How do you feel about that?

It’s a compound. That’s what people are using. We published the structure of CBD way back, fifty-five years ago… I’m glad people know about it. Nobody knows what it does, but that’s okay. Luckily, it’s not going to hurt anybody.

Now, 55 or 60 years later, where do you see the promise? What makes you optimistic?

Two things: One is the clarification of a new bodily system—a biochemical system of major importance. And the other thing is opening the area for novel drugs. We still don’t have novel drugs. CBD is being sold as a drug, but it’s not yet an established one. So, it’s an opening to a new area. CBD was approved after a good clinical trial. Epidiolex is essentially pure CBD with just a very tiny amount of THC, because they are extracting it from a plant.

At this point in your career, do you feel like your relationship with the plant is ancient history?

No, as I said, I am still working on a topic that hasn’t been researched thoroughly, and that is cannabinoid acids. And I’m still involved in that. The actual compounds that the plant produces—it’s important to look at them. One can act on depression in mice. But we’re not mice.

This interview was shortened and edited for clarity.