You’ve heard all about CBD and its amazing effects. Whether or not you sell CBD products, you may be tired of hearing about the substance. Your brother successfully used it to treat anxiety, it helps your mother sleep at night, and your once-cantankerous boss is much less irritable during the workday. Everybody has heard those stories. CBD is a miracle remedy, we get it. What’s new, right?

Here’s what: a seldom talked-about compound called cannabigerol, or CBG. As with CBD, the effects of CBG still are being researched, and there’s significantly less information available on the latter. But while companies continue to find new ways to market CBD to the masses, a smaller segment of the industry is turning its focus to this lesser-known cannabinoid.

CBG is a phytocannabinoid, or a cannabinoid that occurs naturally in the cannabis plant. There are several other phytocannabinoids, like CBD and THC, and all of them stem from a cannabinoid called CBGA, or cannabigerolic acid. This is where things get complicated, but I’ll make it as simple as possible: CBGA is the “parent” of the acidic forms of all other cannabinoids. Through heat and time, all those cannabinoids are converted to their non-acidic forms: THCA becomes THC, CBDA becomes CBD (which sounds a little like a jumbled alphabet song), and CBGA becomes CBG.

CBG sometimes is called “the mother of all cannabinoids” or the “stem cell of cannabinoids” because of its role in converting the others. Despite its significant role, CBG occurs naturally in the cannabis plant in only minute amounts—usually less than 1 percent. Fortunately, as with CBD, farmers have found methods to cultivate strains with higher CBG percentages.

What does CBG do?

As with THC, CBD, and other cannabinoids, CBG works by interacting with the body’s endocannabinoid system—specifically, the CB1 and CB2 receptors—to affect mood, metabolism, pain response, and appetite. The compound is non-psychoactive, like CBD, and as a result will not produce euphoric effects or make users “high.” In fact, research indicates both CBD and CBG may even counterbalance the intoxicating effects of THC when consumed in higher concentrations.

Research on CBG is just beginning, but what we know so far sounds promising. These are some of the effects and benefits the cannabinoid may have to offer:

Yes, the mother cannabinoid has a lot in common with its better-known counterpart, but the two are completely different compounds, each with its own unique chemical structure. While they have many overlapping properties, there remains much to be discovered about CBG’s effects on the human body.

It’s always good to have options, right? Because our bodies each respond differently to different substances, for some individuals the effects of CBG may be more beneficial or fill a need that CBD could not. That can’t be a bad thing.

The possible benefits of CBG are numerous, and research already shows it has some unique properties that stand out from other cannabinoids. We’re excited about studies that show its potential to fight cancer and help with conditions like inflammatory bowel disease, glaucoma, and Huntington’s disease.

Combining CBG with CBD or THC

There’s another unknown, too: What happens when you combine CBG with CBD or THC? Generally, combining cannabinoids can produce a phenomenon called the “entourage effect,” in which the effects of each cannabinoid are enhanced. Moving forward, it’s definitely worth exploring what the compounds can do together.

CBG already is being sold in tinctures, isolates, vape cartridges, and other products, and companies increasingly are catching onto its potential. While awareness continues to grow, professionals in the hemp and cannabis industries are met with a rare opportunity to learn about and share the benefits it offers—that is, before it becomes just as much a household name as “CBD.” 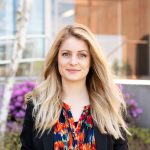 A speaker, leader, and educator, her recent speaking credentials include NECANN, CBD Expo Tour, CBD White Label Conference, and the National Cannabis Marketing Association. Nowitz has been featured in CBD Today, mg Magazine, and the NCIA Podcast. She holds an MBA from Fitchburg University and a BA in business administration in operations and information management from the Isenberg School of Management, University of Massachusetts, Amherst.