Someone who understands how to place your brand or story in front of editors and on the best outlets for your markets–they can give you a valuable edge when building your brand. It’s a science.

Someone like Shawna McGregor–University of Florida alum with a B.S. in Public Relations, Advertising and Advanced Communications, McGregor earned her chops in New York City, beginning with a large public relations firm.

In 1999, she started with public relations firm The Rosen Group, where she currently is senior vice president at their western office, located in Denver.

“One of my top tenets that I work from is that you must tell your story, or someone else will tell it for you,” McGregor explained about media strategy. “It’s important to be a part of the dialogue, to provide your position on an issue. If a tree falls in the forest and nobody is around to hear it, does it make a sound?”

Though McGregor left NYC to help establish Rosen’s Denver location, the real reason she’s rooted in Denver is because she fell (like a tree) for a local.

“When I became the ‘boss of me’–as I like to say–I moved to New York City and never thought I would leave. But I met a guy and he wanted to ‘move back to where he was from,’ Denver, so, I thought I’d give it a shot. We moved to Denver in 2012, just in time for me to vote for Amendment 64 and get pulled into this wild World of Cannabis. Now we live in northwest Denver, and I’m never, ever moving again.” 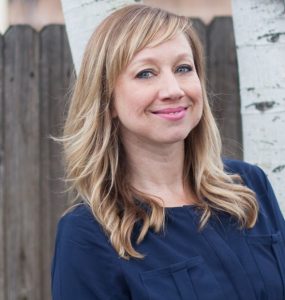 Her husband, Patrick Kane McGregor, is a muralist that travels worldwide for his work. Both dog lovers, Shawna said, “We have two Doberman pinschers, Kita and Bruno. I’m on the Board of Colorado non-profit Saving Dobermankind Animal Rescue and, in my free time, I help them with their marketing, communication, and events.”

Ms. McGregor has a lot of experience working actively with lots of nonprofits, including International Fund for Animal Welfare, The Nature Conservancy, the Smithsonian, and AARP. In 2010, she was a nominee for PRNews’ PR People Awards for Nonprofits. In 2016, Rosen won a Golden Pineapple Award from The Cannabist for Best Agency.

“Every cannabis company should have a Corporate Social Responsibility Strategy, no matter how small,” she suggested.

“It’s critical that every cannabis company–from license holders to ancillary companies–participate in industry associations and support local causes,” she added. “NCIA is a great national organization, and I encourage all of my clients to become members, get involved, go to the caucuses, and join a committee.

“Here in Colorado, the Cannabis Business Alliance offers a link between members and the regulatory entities in Colorado, including the MED, CDPHE, and the Dept. of Agriculture,” McGregor said further. “CBA members get real-time access to department and regulatory bodies to help inform their business decisions and keep an eye out for what’s coming down the pike. Additionally, CBA utilizes relationships with state lawmakers to introduce and provide input on legislation that specifically impacts its members.”

How to Build Better Budtender-Brand Relationships for Long-Term Success

Opinion: Are Republicans Emerging as Leaders in Cannabis Legislation?