Cannabis oils and concentrates represent a large—and growing—portion of the market. Although the sector can be lucrative, product manufacturers must ensure not only emphasize safety but also produce high yields in a cost-effective manner.

“Wiped-filmed units are used by the industry to separate highly pure cannabinoids from a crude extract,” said Chief Executive Officer and Head Engineer Ace Shelander. “Unlike fractional distillation, which finely separates substances such as terpenes, alcohols, cannabinoids, et cetera, wiped-film can process a lot of oil in a relatively short period of time and the end product will contain a mixture of substances. In our industry, this mixture is generally cannabinoids.” 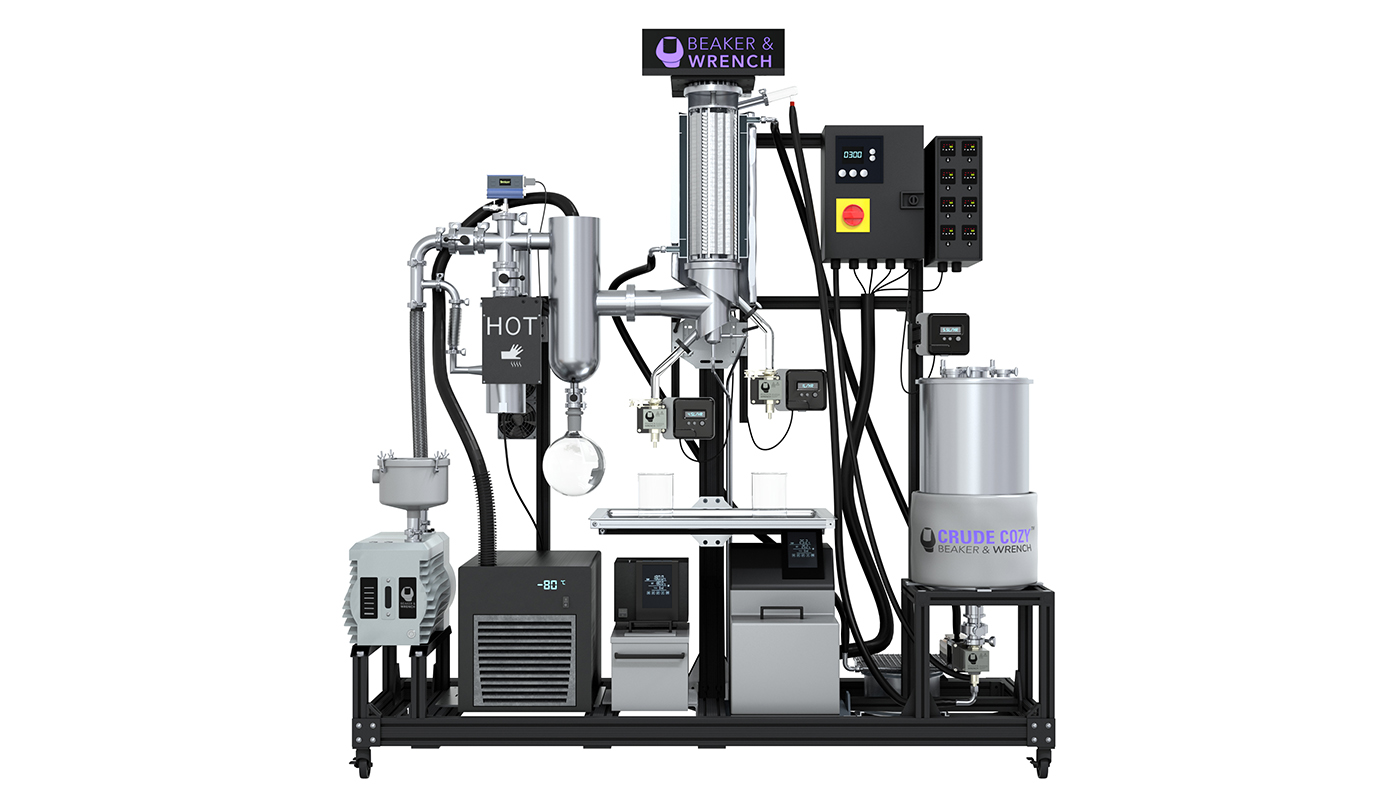 “Our six-inch wiped-film unit is the most productive and easiest unit to use currently on the market,” founder and President Lilibel de la Puente. “It offers the highest purity for its size, and we’ve equipped it with our patent-pending SintertekTM baffled rotor, which can offer 5-10 percent higher purity on the first pass than competitors’ machines.”

In other words, Beaker & Wrench’s machine will produce 90-95 percent pure distillate while some others max out at 85-90 percent. This reduces the chances of having to re-run products, which saves producers both time and money.

“We’ve also installed a powerful vacuum system into the wiper,” Shelander said. “Our six-inch unit is easy to install, easy to maintain, and can begin working on the same day. It does not require as much maintenance as other wiped-film units.”

Beaker & Wrench’s twelve-inch wiped-film unit includes all the features and benefits offered by the six-inch version but allows producers to significantly up their output.

“Our twelve-inch wiper’s output is five-times higher than the six-inch unit,” Shelander said. “You can produce fifteen to twenty liters per hour distillate output, and more than thirty-five liters per hour with terpene stripping.”

The twelve-inch unit also makes the most of the space it occupies … or, rather, the space it doesn’t occupy. Beaker & Wrench wiped-film evaporators are up to five times smaller than competitors’ machines, de la Puente said, yet they match the output of much larger units. According to de la Puente, the units may be rolled in through a door and set up to work the same day.

“Most twelve-inch systems will require a crane to service, but ours is serviceable by two technicians in a single room with no special tools because it has a hydraulic tipping mechanism that we’ve built into it,” Shelander said.

Any number of Beaker & Wrench machines may be daisy-chained together, but the most common configuration is a dual-stage system: Two twelve-inch or two six-inch units connected to run as one system. Not only does such a configuration double output, but it also increases efficiency, helping reduce operator workload and cut down on required maintenance.

The twelve-inch units are computer-controlled, allowing oversight of every aspect of the machine. The user interface is easy to use and presents all information in a way that is easy to understand, which removes a measure of complication from training and operation.

“Employers can easily train their staff to run the twelve-inch in as little as six hours,” Shelander said. “Because it’s web-enabled, the screen can be remotely accessed and it has remote troubleshooting. You can currently log data, and we are working on releasing a software upgrade that will generate batch reports. The batch reports will record temperature, vacuum levels, flow rates, and more.”

Beaker & Wrench not only helps producers quickly set up access to their wiped-film units, but they also help ease financial barriers so businesses can get started right away.

“We offer convenient finance options that include in-house financing,” Shelander said. “If someone is new to the business, they can conveniently put down 50 percent or less of the purchase price and pay the balance over a year. For longer terms and lower down payments, we have a referral program of cannabis-friendly lenders.

“If you’re actually going to run a business on this, the [return on investment] is amazing,” he added. “The machine can pay itself off before our competitors can even deliver.”