It was never my goal to get into the cannabis industry. I’m not even a stoner. I am a gardener. Big time. I spent ten years at an entirely conventional, mainstream lifestyle magazine, rising through the ranks and ultimately becoming the head of the garden department. I enjoyed perks like traveling to Alaska to report on a boom in peony farming. I had a test garden at my fingertips—a place to get dirty while playing with small-scale design and whatever I felt like planting that season. It was the dream job. My predecessor held it for forty years, and I was game to do the same.

But all bets are off when private equity buys the joint. Suddenly, just a few years after my crowning, I was canned.

Desperate to keep writing about gardens, I reached out to all my former editors. One had landed as the managing editor at the San Francisco Chronicle. I assumed she’d just have me write about container gardening or edible gardening or something within my wheelhouse. It was late 2017, and new legislation legalizing recreational cannabis (selling and growing) was about to go into effect. She told me she wanted me to grow weed in my yard and document it as a gardener. I told her I didn’t know where to get seeds. She replied, “That’s your opening line.”

I had no knowledge about the plant. Zero. I had no contacts in the cannabis sphere. None.

So, I started the journey to gain both.

From a horticultural perspective, the curiosity piqued quickly. It’s dioicous, you say? Non-cannabis people might be surprised to learn how rare that is in the plant world. Rare. The idea that I’d have to “sex plants” also was an enticing prospect. Okay, I thought, I’m in.

I slowly set out to find a circle of mentors who could lead the way. I was worried people would say I was a day late and a dollar short, that they would see me as a late-coming hack trying to get in at the eleventh hour. And, indeed, it took a while to find the right people. I was astonished by how little budtenders were willing to share about cannabis cultivation. Keep in mind: This was the only legal place for me to get seeds or clones, and the people selling them were offended by me asking how to grow them. In the rest of the gardening world, nursery workers are all too eager to share their knowledge and bond over a love of plants. Weed is different, though, to say the least. I had to wonder whether many actually lacked knowledge about outdoor cultivation. Were they gardeners?

It’s just a plant, man, and it actually grows much like any other plant.

I found my way. Diehard seed breeders and the folks at my local mom-and-pop hydroponic store came to the rescue. I found my nerds. My plant people. The people who also call them cultivars, not strains (okay, not always, but sometimes).

I worked my way through a ten-part piece for the paper, but I’d barely scratched the itch.

I needn’t explain this to you, dear reader, but my love for the plant only grew as my ladies blossomed outside. The smells, the bizarre flowers—all of it. I’ve grown a lot of things, and weed is unlike any others. But in my own backyard growing, I’d had a lot of trouble finding the most basic information for a casual gardener like me. Books read like electrician’s manuals, not garden primers. There was often more information about what a cultivar will do to you than how it will perform in the garden.

Having one book under my belt, I decided to go for it and write a book about cultivating weed—a fuss-free, all-outdoor approach to growing the plant outside in the garden—my second. I would make it beautiful. Shot exclusively outdoors, like any other of the zillions of magazine articles I’d worked on in my day. It would be how Martha Stewart would grow weed. (She ultimately agreed to blurb the back cover—a total pipe dream come true.)

I got to know outdoor pot growers from all around the country—Vermont to Arizona to Oregon. And several fieldtrips to Humboldt significantly deepened my commitment to getting the story right.

By the end of the project, I’d grown emboldened to have a real point of view about the subject. No longer timid—an outsider nervous about being accepted—I was here to clean things up. Stop saying strains. Stop obsessing over “vegetative” and “flowering”—it’s not like a light switch being flipped when you’re outside. It just… happens. It’s just a plant, man, and it actually grows much like any other plant. It needs compost, sunshine, water, and a gardener’s eyes.

I’m a freelance writer now. I still get to write about peony collectors and fancy-pants gardens. But I’ve added weed outlets to my repertoire. And I’m still a gardener. Still big-time. I continue growing weed in my backyard. I’ve discovered there are a million non-stoner reasons to do it. I’m in it for the iconic leaves and the other-worldly smells. I want to grow different terpene profiles and get my hands on seeds from far-flung places. I want to see the diversity in this magical species.

And besides, it makes a gorgeous green backdrop for my tomatoes, peppers, cucumbers, and basil. 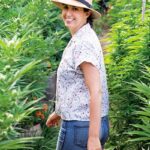 Johanna Silver is a James Beard Award-winning author who writes mostly about plants and people. She’s a contributing editor at Better Homes & Gardens, and appears regularly in Martha Stewart Living, the San Francisco Chronicle, and Eating Well. Her first book, The Bold Dry Garden: Lessons from the Ruth Bancroft Garden (Timber, 2016) tells the story of an iconic plant collector. Her second, Growing Weed in the Garden: A No-Fuss, Seed-to-Stash Guide to Outdoor Cannabis Cultivation (Abrams, 2020), is available everywhere books are sold.