Last week, the cannabis industry’s decision-makers descended on downtown Chicago for the Benzinga Cannabis Capital Conference. The bi-annual event is hosted and produced by the prominent financial media outlet, and brought together more than 2000 founders, C-suite, and executive leaders with the aim of fostering more meaningful connections among those charting the course for cannabis in the U.S. and around the world.

The conference’s timing couldn’t have been better. Persistent capital restraints and regulatory inaction have left the industry reeling with little abatement in sight, and the mood everywhere has been pessimistic. While Benzinga had considerably more sellers than buyers and few answers beyond continuing to wait for the Senate to change its tune on banking, the opportunity to smile and laugh, and do some preemptive wheeling and dealing felt as cathartic as it was productive. 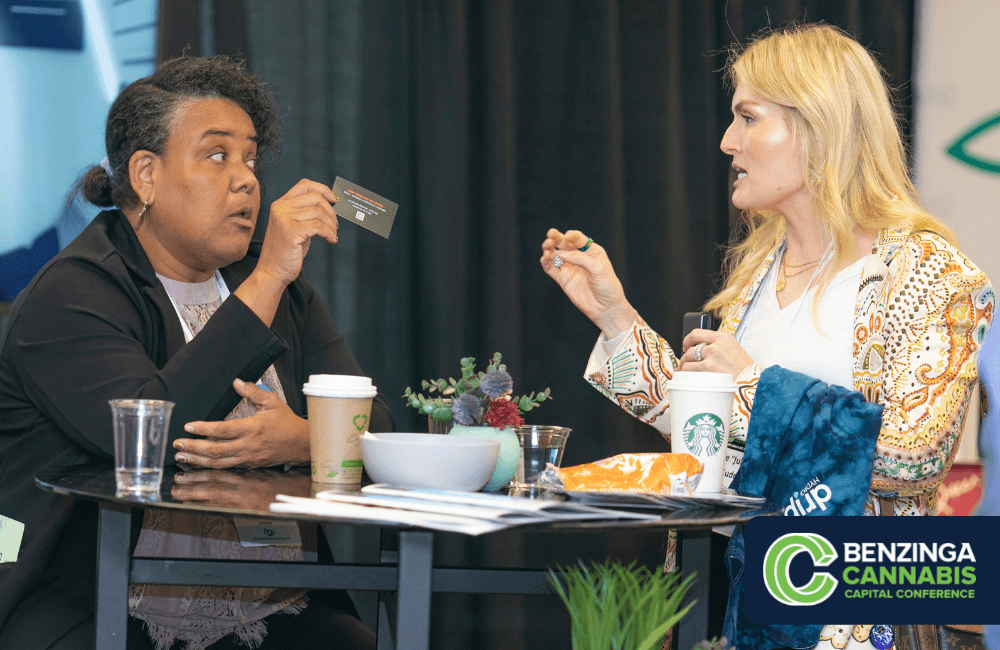 “This is the place where deals get started, get finalized, or actually close,” said Patrick Lane, EVP at Benzinga. “We bring everybody together in one spot. I don’t think you can find this level of executive power anywhere in the industry right now.”

Providing a nexus for those leaders to connect is where Benzinga shines. The entire third floor, hotel lobby, and the Starbucks on the ground floor were a swell of dynamic meeting spaces, allowing everyone to maximize the rare opportunity to connect in person with their peers from across the country.

“You can’t collect this much information at one period of time like you can here,” said Rob Sechrist, co-founding president of Pelorus Equity Group. “Being present here, building those relationships, and building up trust between people so that they speak openly with you is invaluable.”

The festivities kicked off on Monday evening with the Benzinga Cannabis Awards show. Among the winners were Sechrist’s company for Most Innovative Lender, Cann’s Luke Anderson, who took home the Leader Under 40 award, and Mary Bailey of the Last Prisoner Project for Advocate of the Year, while multistate operator (MSO) Jushi was awarded the wonky but refreshingly relevant gong for Best Use of Capital.

The conference itself opened the following morning with a keynote by Wendy Berger, board member of Green Thumb Industries (GTI), active investor in female-owned cannabis companies, and a proud Chicagoan.

“Having this conference in Chicago is really meaningful,” Berger said. “You have four of the largest cannabis companies [GTI, Cresco, Verano and PharmaCann] based here, and I think this is the region where this business was figured out. We’re very proud of the contribution that Chicago’s cannabis companies have made to the industry.” 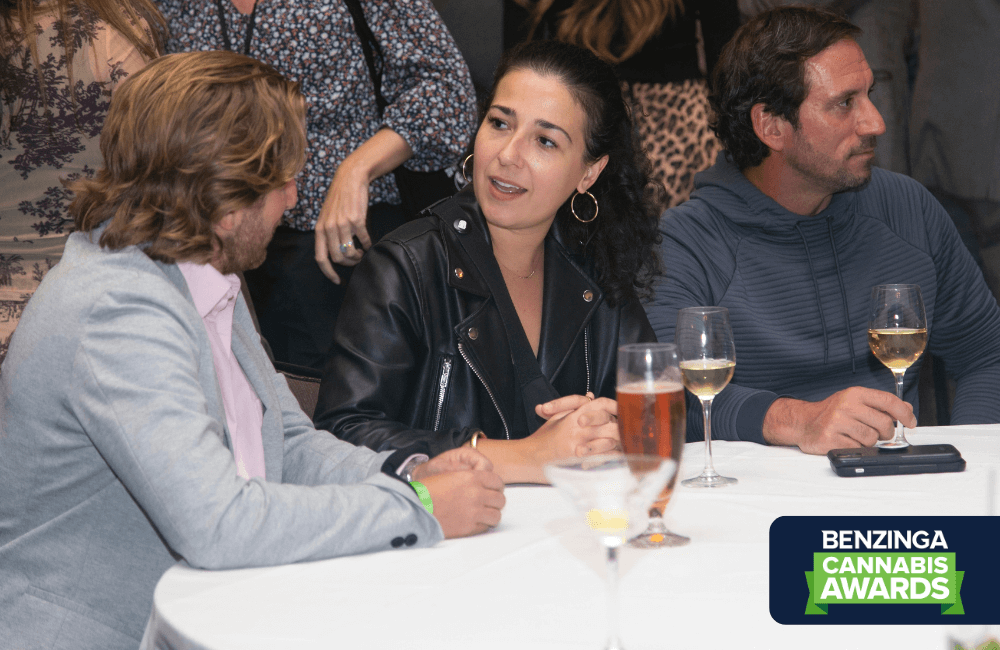 Elsewhere, the engaging speaker lineup included the likes of Cresco CEO Charlie Bachtell, Trulieve’s Kim Rivers, Weedmaps’ Chris Beals, and StateHouse’s CEO Ed Schmults, discussing subjects like consolidation, emerging markets, and scaling outside of the MSO structure. However, the award for buzziest panel goes to former pro wrestling superstar Ric Flair and heavyweight champion Mike Tyson of Tyson 2.0, who sparked up on stage, much to the delight of the crowd and the organizers.

“That was definitely a highlight!” said Lane. “Look, we’re not Bloomberg or Reuters. [Benzinga] is a little more, let’s say, eccentric.”

Benzinga also debuted its Scholarship Spotlight series, which gave female and minority-founded companies like Garden Society, Ciencia Labs, and 40 Tons the chance to pitch to potential investors and partners. Berger, who is a mentor to many women entrepreneurs, commended the organizers for making this commitment to underserved founders.

“Look at how many women are getting meetings right now,” said Berger, noting the crowd that filled the lobby. “The cannabis industry has made huge progress in that regard, and I credit Benzinga for giving women who run under-capitalized companies the chance to pitch on their stage.”

The expo component of the event was intimate yet lively. Packed into a large conference room, the participating companies found value in having more in-depth conversations with potential leads, many of whom are empowered to make decisions at their companies, an aspect of Benzinga’s audience that stood in contrast to most trade show events.

“This is a small enough group where you really get to have authentic conversations,” said Jocelyn Sheltraw, head of industry relations at Headset. Sheltraw is a fixture on the cannabis conference circuit and feels that Benzinga’s attendees are exactly who they need to speak with to drive sales. “We have already closed several deals at the event.” 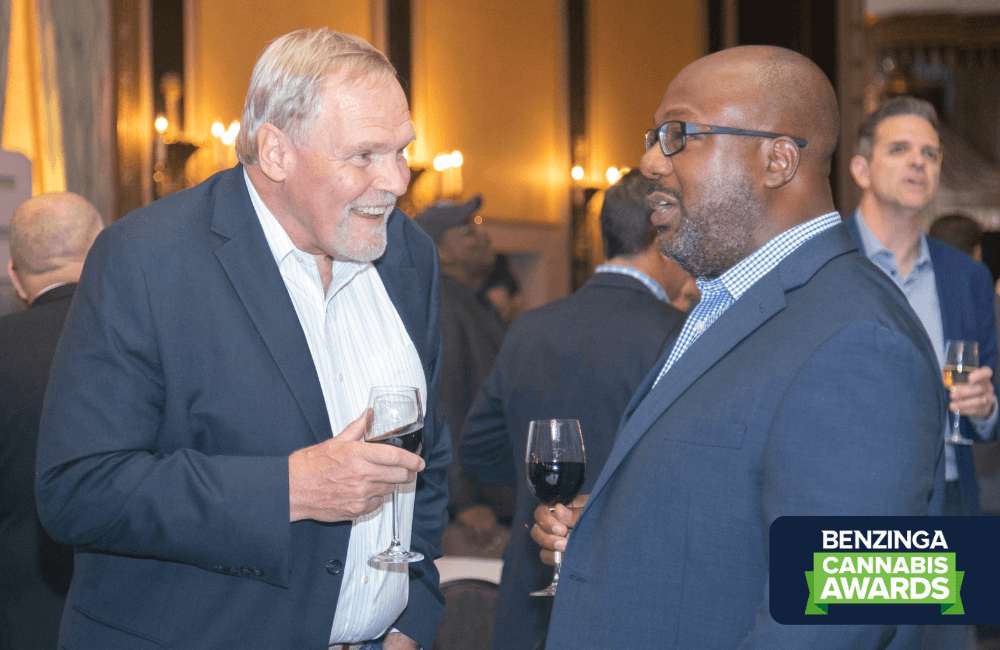 Given Benzinga’s primary focus is the business of capital, the conference couldn’t have come at a more opportune moment. The industry is suffering once more from a liquidity crisis as new investment has slowed to a drip. Some public stocks are down as much as 70 percent from the highs of early 2021, placing downward pressure on valuations across the supply chain. The macro outlook has seldom sounded bleaker, and around the conference terms like “extinction event” or “Darwinist” were heard to describe the looming cull of the weak and the unprofitable.

Where some continue to hope in vain that the federal government will be the much-needed catalyst, others are rolling their sleeves up and looking inward to find continued growth.

“We can’t control industry pricing and we can’t control regulation,” said Jamie Mendola, head of Strategy and M&A for Ayr Wellness. “This is a time where everyone needs to focus on optimizing operations, improving margins, and bringing value to the consumer.”

And yet, despite these considerable headwinds, the mood within the conference was undeniably optimistic. “If you look at the data, the industry is expected to grow 14 to 15 percent this year. For any other industry you’d say that was phenomenal,” said Wendy Berger. “Outside of this conference everyone is doom and gloom, but here, the vibe is very positive. People actually want to make deals and are exploring partnerships.”

Given that the “dry powder” is as scarce as it has been in years, Benzinga Cannabis Capital Conference is unlikely to have solved the major constraints that most of the companies in attendance faced. But by bringing the executive class of the industry together to plan for liquidity, explore M&A opportunities, form partnerships, and remind one another why we jumped into this tumultuous industry in the first place, the conference was perfectly timed and impressively executed, cementing Benzinga’s place as the Davos of Cannabis.