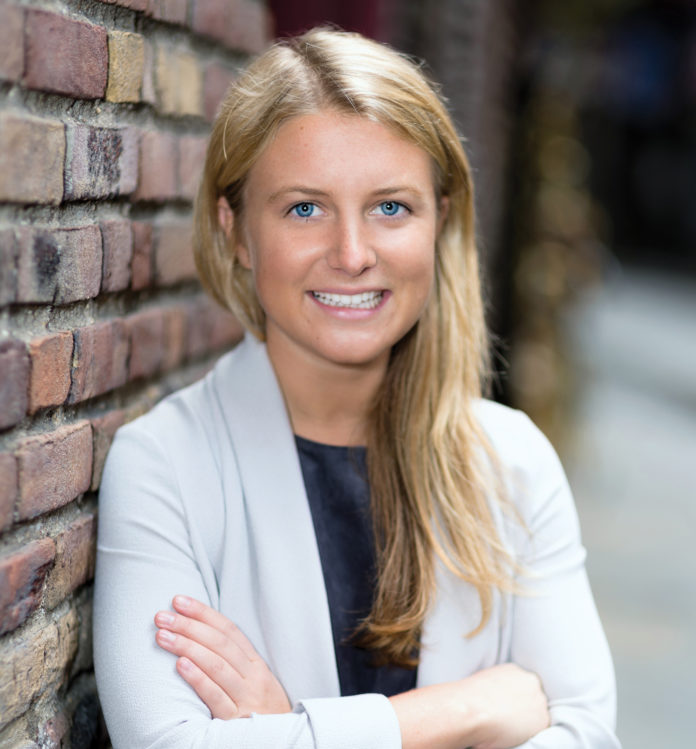 It’s appropriate Karson Humiston found a successful career in the cannabis world: She’s worked with grass since third grade, when she took on her first job.

“My family lived on a golf course,” recalled the founder and chief executive officer of Vangst, a leading employment resource for the cannabis industry. “At night, my dad and I would go frog hunting and also scoop up the golf balls we found. I decided to go to the pro club and see if it would be okay for me to set up a stand and sell the balls, along with water bottles, on the fourth hole. The golfers loved it, and we even set up a second location.”

As it turned out, the experience was worth far more than the $100 a week she earned: The job paved the way for her cannabis career. “It taught me persistence,” Humiston explained, adding “nobody wanted me to do it, but I didn’t take ‘no’ for an answer.” The belief “you can become what you think [you can become]” helped her turn Vangst from a spur-of-the-moment idea into a company with a projected revenue of $5 million for 2018.

Think of her service, which began in 2015, as a LinkedIn that connects cannabis industry employers and potential employees. “You’re only as good as the people you hire,” Humiston said. “You can have the greatest idea in the world, but if you can’t hire great people to execute it, it’s worth nothing. That’s where we can help.”

Vangst currently serves approximately 700 corporate clients, providing them with credentials for more than 80,000 eager job seekers. Humiston’s company has grown from a staff of one in its earliest days to sixty-three today, with offices located in Colorado, California, and Washington state. She’s thrilled by the nearly 700-percent increase in job listings since January 2017 and is poised to take advantage of the projected 220-percent earnings growth for the industry next year. After all, as the marijuana industry continues to expand, so will the need for her services.

“There’s 160,000 people working full-time in this space now, and every year that will continue to go up,” Humiston said. “We’ve placed 10,000 people [through direct hire, job boards, and career fairs] since we started, but while we’re doing great work, we haven’t even placed 10 percent of the employees in the industry. My goal is to eventually have 50 percent come through our platform or through our network somehow. I really don’t think we’ve even scratched the surface of what we’re going to be able to do.”

What inspired you to create Vangst?
It’s a different story than most. I was in college [St. Lawrence University] and had started a travel company that helped organize students’ trips. I didn’t want to stay in travel and continue dealing with drunken college students after graduation. Plus, I was aware the one thing everyone stresses about as college ends is getting a job. Meanwhile, I was seeing friends of mine take jobs in dying industries and knew I didn’t want any part of that. So, I sent an email to everyone in my database, asking which industry they were most interested in getting jobs in after graduation. An overwhelming number said they wanted a job in the cannabis industry. So, I decided to go to a cannabis trade show in the spring of 2015 just to check it out.

How did that experience change you?
My mind was blown when I saw the different types of companies in the space and the kinds of positions they were hiring—everything from chemical engineers to marketing associates to accountants. I asked the companies that were there how they found employees, and they told me it was really tough. They’d post on traditional job boards, but the listings were usually flagged and taken down because they mentioned cannabis. There was no industry-specific recruiting firm.

Then, I heard a speaker talk about his son, who had been having twelve to fifteen epileptic seizures a day. The mom showed a video of the boy having a seizure and then getting some cannabis cream on his foot. The seizure stopped! I was, like, “Holy cow! We have the option of putting people on drugs that are addictive, or we can let them use something as simple as cannabis lotion on their feet.” I left that night, went to the FedEx office in the convention center, and designed some business cards featuring a graduation cap and a weed leaf. I came up with the name “Gradujuana” and wrote on the card, “Green Jobs for Grads.” I went back the next day, companies wrote down the positions they needed to fill on my card, and since so many of them were based in Colorado, that’s where I went after graduation.

What became of Gradujuana?
That name wasn’t really working for me, but I was getting a lot of business and felt I needed to rebrand. I wish I had a good reason behind coming up with Vangst, but I don’t. It means “catch” in Dutch, and I’m part Dutch. I liked the idea we were trying to catch the top talent. I also liked having a name we could use for the people we were placing. We call them “Vangsters.”

Vangsters?
That’s what we call the community of people we’ve placed in jobs. Everyone we place is an Original Vangster. When they get a job, we send them a box that says, “Damn, it feels good to be a Vangster. Congratulations on your new job.” In the box is swag and treats for their first day on the job. We also do Vangster Nights every quarter in each city we serve. We invite all our local clients and placements and encourage everyone to invite a friend to network.

What’s the best business advice you’ve ever received?
Hire senior people before you need them. Hire them based on where you’re going, not where you’ve been. That advice came from one of our investors. She said you need to look at where the company is going and determine whether the person you’re looking at is right for, in my case, Vangst Phase Two.

I will say that, for me, ever since I started hiring senior people my business has expanded. So, I wish I had heard that advice sooner. Early on, I thought I should be doing everything myself and working around the clock. The thing is, there was a lot I didn’t know. For instance, I waited to hire [a human resources] professional until I had fifty-three people on staff and only then realized policies I could have put in place much earlier.

What was the worst advice?
People told me too early in developing my business that I needed to be completely removed from the day-to-day operations. That’s so stupid for early-stage companies. Someone told me, “It makes your company look small if you go to meetings with your sales team. They wonder why the CEO is attending. Does she have nothing better to do?” But I’d go to hear what clients thought about our product and where they thought their business was going.

Maybe removing yourself makes sense when you have 10,000 employees, but when you’re a startup with fewer than 100 employees, don’t act like you’re Facebook. Clients appreciate when I bring them donuts or pizza and ask what’s up.

You’ve told your staff you’re running a marathon this year. Why did you feel a race was something worth making time for in your busy schedule?

I’ve had so many work goals in my life and have always been very team-driven because you need a lot of people if you want to make goals happen. With a marathon, nobody can make that happen except me.

Right now, our team is doing so well and I’m relying on other people to do great things. That’s why I wanted to remind myself to try something nobody can help with. If I miss a day of marathon training, I’m the only person who suffers.

I couldn’t have picked a busier time to do this. Still, I wanted to do it not just for myself but also because it’s a great example to set for the rest of the team. It teaches them to have a goal outside work. It demonstrates activity and health are super-important.

I like to lead by example, so running a marathon also shows everyone that if our founder and CEO, in the midst of all this chaos, can pull this off, [other people] can certainly get to the gym for an hour a day and help themselves, too.