Over a span of three years, Jim Belushi’s tentative first steps into the cannabis industry morphed into full immersion. The founder and operator of Belushi’s Farm threw himself into the deep end of the pool at MJBizCon 2016 and hasn’t stopped soaking up knowledge since. Today, the ninety-three-acre spread in southern Oregon hosts a 22,000-square-foot, state-licensed grow that puts Belushi’s Private Vault on the shelves of dispensaries statewide, but Belushi said he is nowhere near finished with his education.

“I started learning three years ago,” the actor/producer/musician/cultivator said in mid-November as he prepared for his third sojourn to the Las Vegas event. “I feel like last year I got my associate degree from junior college, and now I’m moving on to my master’s program. I understand everything that goes on with the plant, and now I’m learning the business aspect of it.

“The first [MJBizCon] blew me away. The second one, I was, like, ‘Okay, I feel like I’m getting it.’ This year, I feel like I belong there,” he said with a slap of the hands. “I’m ready to be with all the guys and gals that I’ve developed relationships with for the past three years and I’m really looking forward to it. There is so much to do, I’m a little overwhelmed.”

On the farm, which he visits once a month on average, Belushi is a self-described “hands-on, boots-on-the-ground kind of guy,” who isn’t afraid to touch the plant. To the contrary, he exclaimed, “I’m growing the shit. I’m growing it. I’m flushing the irrigation two weeks before [harvest]. I’m cloning. I mean, Captain Jack wouldn’t let me clone his [plants], but I’m in there every day with my finger in the swamp.”

Captain Jack, of course, is the venerated grower and protector of the priceless Gulzar Afghanica cultivar, which was discovered in the Mazar-I-Sharif region of Afghanistan and presumably is still grown there. The bud from the plant famously became the “smell of SNL” back in the day, when Jim’s late brother, John, was a member of the Not Ready for Prime Time Players and Captain Jack—the man and the bud—were a regular fixture at Saturday Night Live tapings.

Speaking of SNL, Belushi arrived early to our interview after having lunch with another early cast member. “That’s the first time I’ve been early in seven years,” he said. “I would have been later, but I was having lunch with Danny Aykroyd.” He launched into an impression of the actor cutting lunch short: “‘Ah, Jimmy, I gotta go.’ ‘Okay, great, I can get across to the Valley.’ ‘Ah, Jimmy, it’s so great to see you. Keep that smoke [from the then-raging wildfires] away from your house.’

“He brought Captain Jack to me,” Belushi said of Aykroyd. “Nothing but love around all of this. If you’ve read some of the stuff that I’ve talked about the full circle, it’s like I’m being led. This plant is leading me somewhere. So, I’m just following it.”

Following his career as a commercial tuna fisherman, Captain Jack now works on Belushi’s Farm, and his cultivar—reportedly as pure today as when it first arrived in the New World—is one of the farm’s signature brands. According to the farm’s website, “These plants haven’t been tweaked and messed with in a lab with chemicals, they haven’t been hybridized a million times, they have been finessed and groomed to maintain the sanctity of old-world Afghani cannabis… The result is a wonderfully elusive bud with a record high quantity of myrcene [a terpene] that creates what is called the ‘entourage effect,’ where the whole is greater than the sum of its parts.” 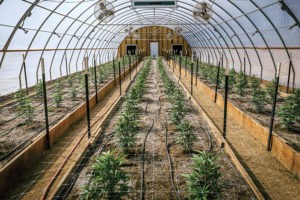 Belushi’s Farm evokes the memory of Belushi’s celebrated elder brother, who died of an opioid overdose in 1982 at the age of 33. In a poignant tribute to John, who would have turned 70 January 24, a note from Jim on the homepage of the farm’s website reads, “I have finally come full circle, dealing with my brother’s tragic overdose. That overdose collapsed our family, and that collapse contributed to more divorces and more trauma. Now I’m on a path of more healing and more happiness. I’m not going to let my brother’s passing be in vain. I want to see the healing of communities, illnesses, and of course family. That’s why I’m here.” That sense of mission is palpable in Belushi, who said financial gain is not his motivation.

“Is there a higher purpose and does it have to do with John? Certainly,” he said. “Does it have to do with suffering from a collapse and family trauma? Yes. Do I see a window where we can help some families through the innocence of this amazing plant? It’s a no-brainer to me. If I break even, people are getting paid, we’re putting money into the community, and people are loving their jobs…I’m doing fine.

“I’m sure the money will be there,” he added after a pause. “You lead with passion and things happen.” What he has no time for is a green-rush mentality with treasure as its only objective. Using a theme park example to make his point, he complained, “The green-rush guys are always talking about the little X on the Pirates of the Caribbean map. Stop with the X. Tell me about the footing going up the hill.” 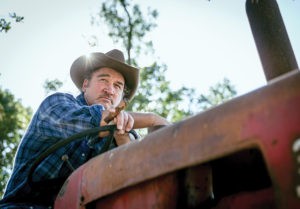 Authenticity also is what drew him to Oregon, which he described as “a farming community. Oregon is an agricultural community. They’ll kill me for saying it, but it’s the same kind of mentality as Humboldt. These guys have been growing in this parallel for decades. They’re connoisseurs; they’re cultivators; they love, love, love their plant.”

The farm itself is a gorgeous piece of property in the Rogue Valley. An Elks picnic ground for forty years, the property holds a lot of personal history for people. “Everybody I’ve run into in southern Oregon has said to me, ‘You know, I’ve been to that place,’” he said. “‘My parents got married there. We had the company picnic.’ Everybody’s gotten drunk on that property.”

With that history has come a certain amount of responsibility Belushi has been only too happy to take on. “When I rebuilt it, there were people in the community who said, ‘You know, my mom got married there, do you think I could…’ I spent $10,000 just repainting the floors and fixing it up for this girl’s wedding. I think they gave me about $4,000 for it, but I didn’t care. I just wanted her to have a good time.” The Elks also throw an annual shindig, as does the Cattlemen’s Association, who Belushi said has “been great. They come every year, throw a big party. I don’t charge them anything.”

While anything but an absentee owner, Belushi leaves day-to-day farm management to a “dream team” of about a dozen people, including his cousin, Chris, who Belushi said is “like a general manager.” A former successful restaurateur, he “literally came to visit me and has yet to leave,” said Belushi. “He’s kind of running the management aspect, but I’m on the ground.” 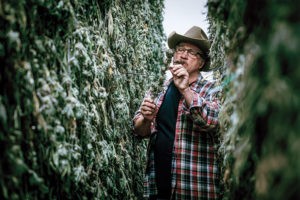 At sixty-four years old, with an acting resume spanning five decades, Belushi is very much at ease with a life that has allowed him the luxury of indulging his muses. “I’ve only followed what I liked,” he said. “I liked football and I played football, and then at a certain point I didn’t like football. I blew a speech in speech class—I didn’t have it prepared; it was my freshman year in college; John was already out of school—so, I walked into the room and put a fake bandana on my head and played a hippie who had been at the first Vietnam moratorium the day before, October 15. I improvised a speech in which I basically yelled at everyone for not being at the moratorium trying to keep our boys out of war. I got a D on the speech and he cast me in his play that night.” 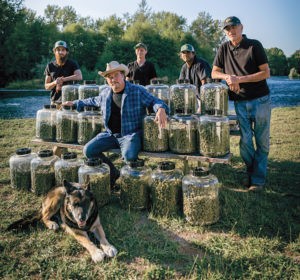 Theater made eminently more sense than football. “There were five guys and twenty-two girls in the theater department,” he said. “I could never get a date as a tackle in football. Now girls are saying, ‘Hey, I’m dating the tackle.’ I got to meet girls and I got laughs, which made me feel good. So, I’ve just kind of followed what made me feel good, and it was the same thing with the music. John introduced me to Second City, which introduced me to Saturday Night Live and the movie business. Danny wanted me to do the Blues Brothers with him, to which I said no. ‘That’s John’s and your thing,’ I said. He goes, ‘Absolutely not, Jimmy. It’s like a law firm. When one of the partners goes down, the son or the brother takes over.’

“But I didn’t know how to sing the blues,” Belushi continued. “I can do light opera, because I did that on Broadway, but not the Blues. ‘Well, you better learn,” said Aykroyd. So, I started at House of Blues with the Sacred Hearts, a Monday night band with a bunch of great musicians. Suddenly, I’m in a band. All of a sudden, my band is doing the Blues Brothers and now for twenty-five years we’ve been doing corporate gigs and benefits all over the world.

Belushi’s payment is visceral. He talked quietly about a veteran with PTSD who’d seen things overseas that no one should witness. “But with your Black Dog OG, I can sleep and talk to my wife and kids,” the vet told him. When Belushi pushed back saying his own contribution was minimal, the vet insisted, “No, but you’re the steward.”

That brought Belushi up short. “I’m finding purpose every day, and it all originates from the medicine of this plant,” he said in a barely audible voice.

About his own healing, Belushi is equally frank. “My own PTSD? Come on,” he said. “People lose a family member, whether it’s in a war, car accident, or drug overdose, it collapses a family. My family collapsed,” he said of the aftermath of his brother’s death. “Collapsed. Divorce is the number one trauma. It’s like putting a child in front of a train. The trauma of coming from a collapsed family and how to survive in your life is amazing.”

When a family is traumatized to that extent, he added, “80 percent don’t make it. You can see how hard it is for them to succeed, especially with social media. I’ve never seen so much anxiety in kids between the ages of 14 and 27. I was flabbergasted when my wife told me about all the girls that are on some sort of medication to handle their anxiety. I’m like, honey, just give them a vape pen, for Christ’s sake. Something. CBD. 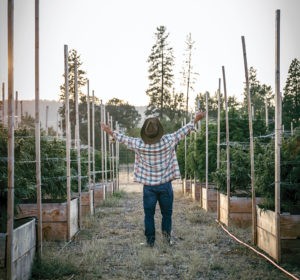 “This plant soothes those endocannabinoids,” he added. “It slows down the rush, and yes, it’s a medicine for me. I have a very low tolerance. I’m not an all-day guy—I’m very much a micro kind of guy—but I see what it’s doing for other families.”

Without the pressure to get rich via cannabis and driven by a determination to heal others as well as himself and his family, Belushi’s full schedule will not prevent him from dedicating himself to cannabis. “I am fully engaged in this plant and its process and its journey, and I’m going where it leads me,” he stated again.

Take a look behind the scenes at Jim’s mg Magazine cover shoot, and find out what made the writers on Saturday Night Live so funny.