Telling stories through imagery has been a defining human characteristic since the earliest men painted on cave walls. Those drawings eventually lead to oil on canvas. With the development of photography in the early 1800s, a new storytelling medium emerged.

Cannabis is naturally photogenic, but the plant’s beauty and the lives and work of those who toil in the fields went largely undocumented until relatively recently. “Cannabis is a beautiful plant with infinite permutations of genetic traits,” said Shayna Goldstein, who, with Aaron Rogosin, co-founded Outer Elements Photography. “As the daughter of a biologist, I find it fascinating to be able to document this incredible plant that has intentionally not been documented.” 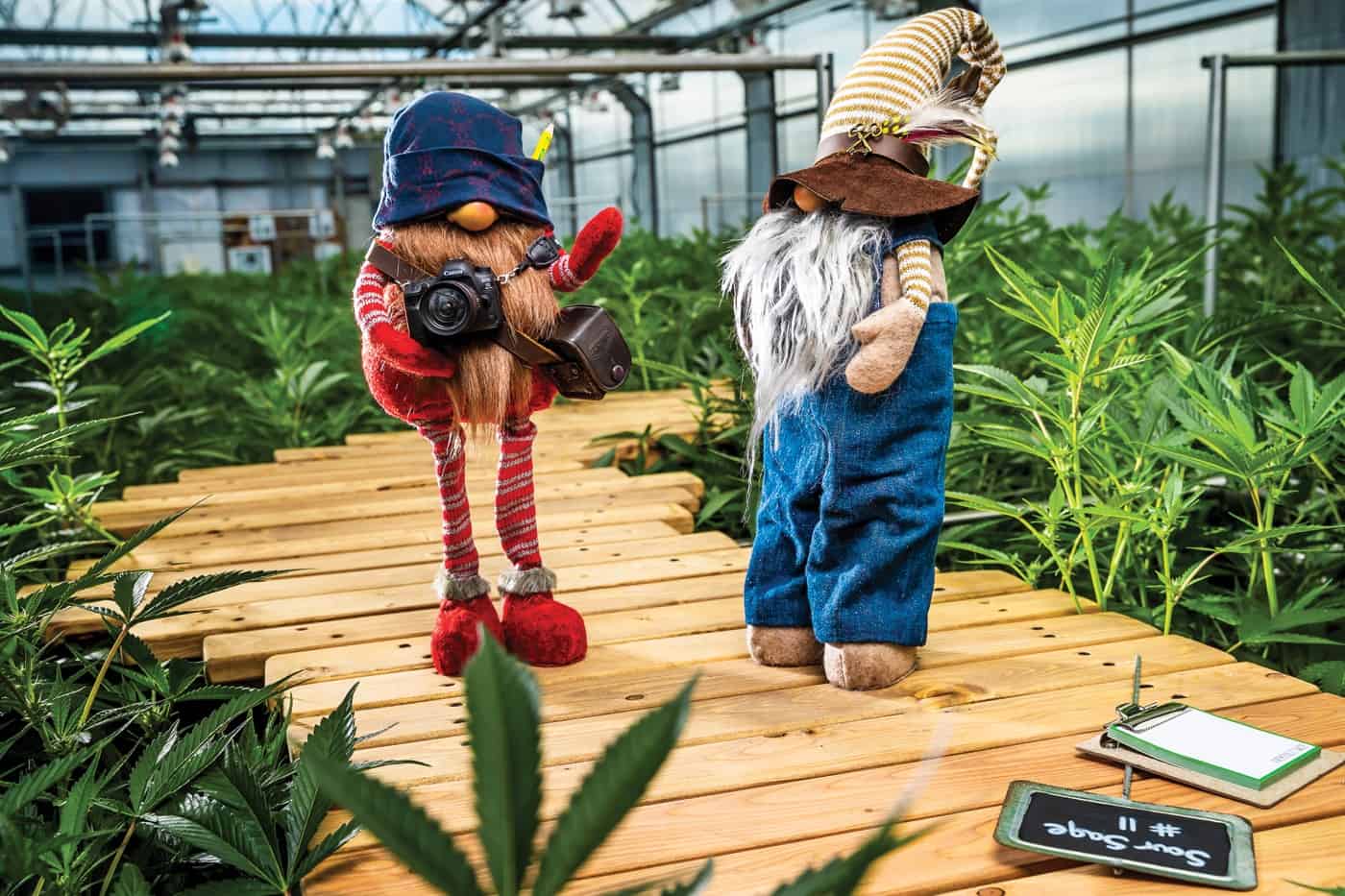 Outer Elements saw its genesis in 2016 while Goldstein and Rogosin were on a month-long bicycle tour through the Czech Republic, Austria, and Switzerland. A professional photographer with clients including South by Southwest and Red Bull, Rogosin wanted to expand his portfolio. “I knew if I really wanted to reach my potential as a photographer, entrepreneur, and industry leader, we needed a brand that was synonymous with quality so it could scale beyond the limits of a sole proprietor,” he said.

“Within the past two years, Shayna and I realized we have a tremendous opportunity to help define a new visual culture.” —Aaron Rogosin, co-founder, Outer Elements Photography

Before Outer Elements, Goldstein worked in the film industry, mostly in art departments. While she loved the work and the relationships she forged, film production can be labor-intensive, offering little downtime. “Episodics are a grind,” she said of her work on television series. “My relationship with cannabis was solidified during this time as a way to help me relax, sleep, let go of stress, and manage pain.”

The pair’s personal relationship with cannabis evolved into a solid professional relationship with the people who grow the herb. Initially, they photographed plants for Southern Oregon cultivators but didn’t include the images in their professional portfolio for fear they’d alienate other clients. “We’ve always had one foot in [the industry] but, due to the stigma surrounding prohibition and the potential of alienating our ‘mainstream’ clients, we never really promoted the work we did through our traditional outlets,” Rosogin said. They eventually discarded what turned out to be an erroneous concern. “Within the past two years, Shayna and I realized we have a tremendous opportunity to help define a new visual culture,” he said. 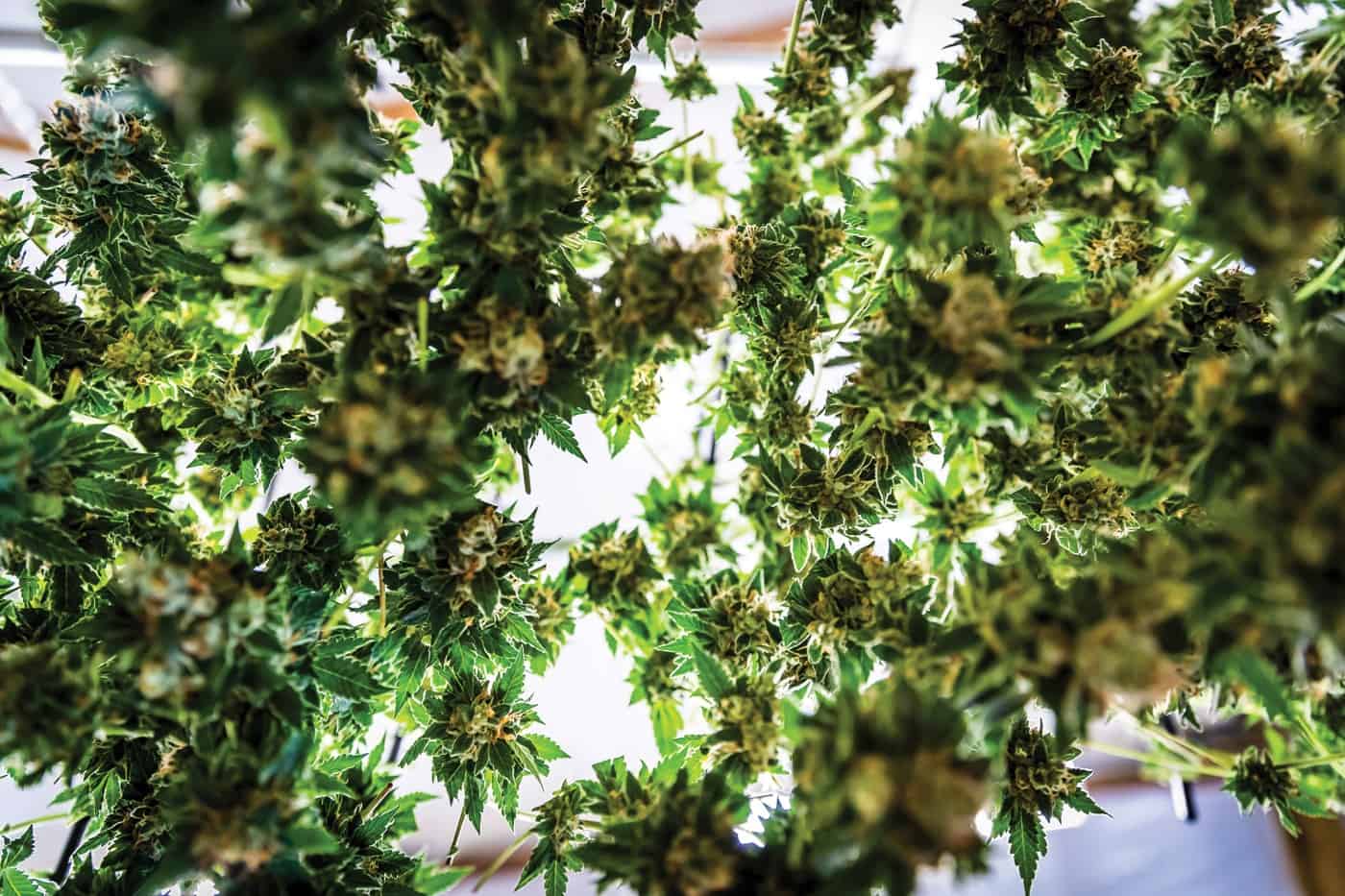 Changing the landscape
Since that revelation, Rosogin and Goldstein have taken an active role in developing the cannabis industry’s image. In their estimation, unsophisticated and often sexist marketing dominated the landscape in the early days. That is changing as marketers understand businesses and consumers compose a diverse population. “One of the first lessons in marketing and branding is ‘don’t turn people off by using dated and sexist archetypes,’” Goldstein said. Rosogin said he hopes such “low-hanging fruit” is on its way out. “There are so many stories that can be told about this plant,” he said. “It has profound potential to impact our world.”

Branding is everything in the cannabis industry. Without access to most traditional advertising forums, initial impressions become the first, and often only, opportunity to connect with customers. “In the first five seconds, people are deciding if they trust you,” Goldstein said. Despite other differences between the industries, she sees a parallel between marketing cannabis and films: audiences’ short attention span. “It’s kind of like set design, where you’re helping shape the character of your product by how it’s presented,” she said.

Although branding is about highlighting stories, Outer Elements is not in the business of fabricating narratives. “Aaron and I seek out people and companies with a clear mission-driven ethos,” said Goldstein. “It’s very important for us to be moving this industry forward through education.” Rosogin added both of them temper their capitalist goals with no small amount of idealism. “We care deeply about the people,” he said. “We run a business and of course money is important, but working toward building an industry that is based on stewardship, community, and compassion is just as important as the bottom line.” 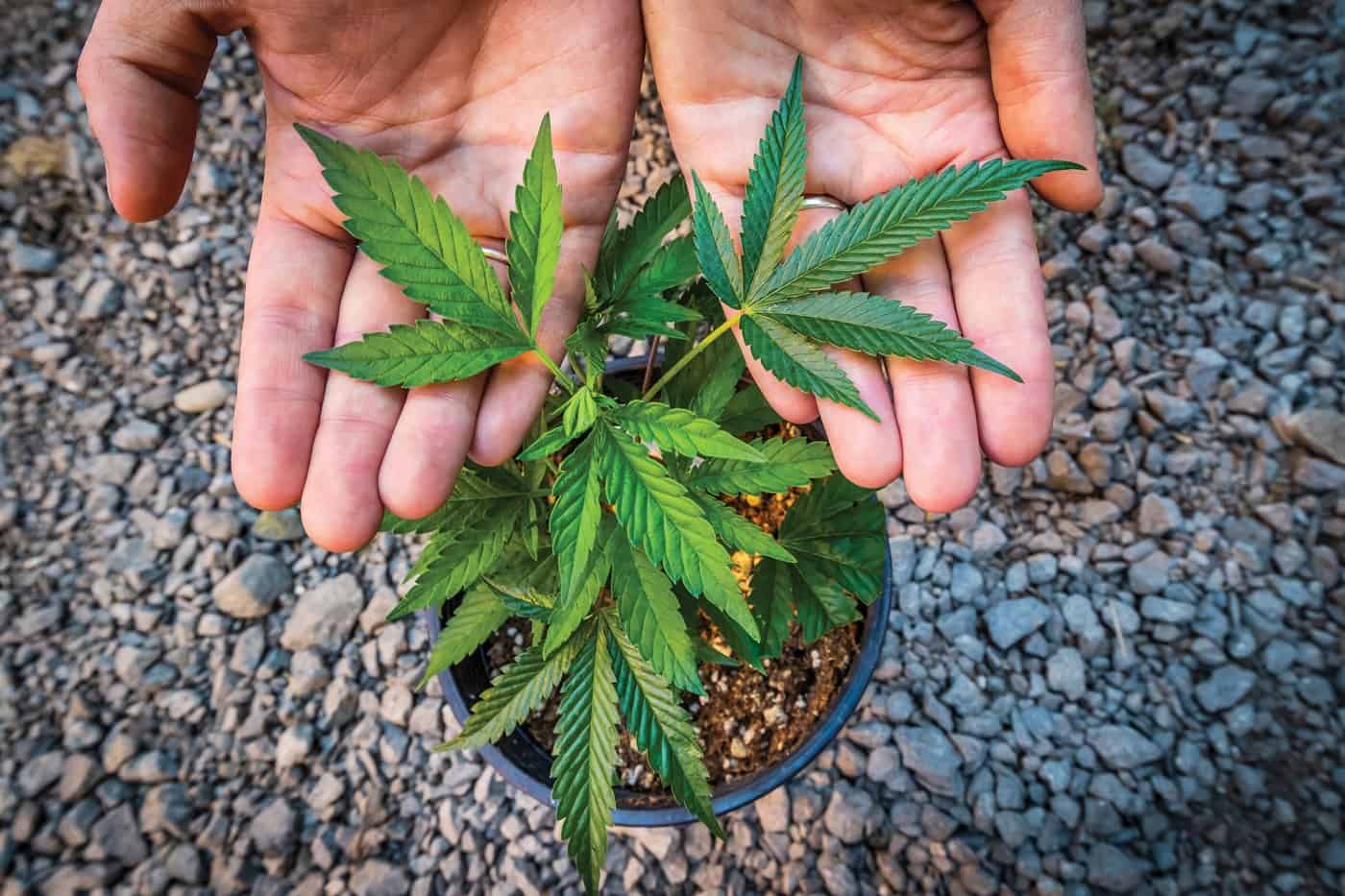 Through the lens
Outer Elements images frequently are breathtaking, and such artistry is not a lucky coincidence. The partners invest significant effort in every shot. Because they are documenting a controlled substance, their work must be accomplished on-site, and cannabis farms typically are not located in easily accessible settings. “We bring a mobile studio everywhere we go,” Rosogin explained. “We shoot with the Elinchrom ELB 400s and 1200s. These are lithium-ion-battery-powered portable lighting units that eliminate the need for a stationary power source. Being able to move unhindered by long power cords gives us a huge advantage to produce studio-quality work under any circumstances or conditions.”

“Working toward building an industry that is based on stewardship, community, and compassion is just as important as the bottom line.” —Aaron Rogosin, co-founder, Outer Elements Photography

The team also invests considerable time and effort in helping clients define goals for the shoot. The complex procedure starts with a simple question, according to Rosogin: “Why are we taking this photo?” Far from the subject of existential reflection, the answer informs his strategy. “Where will [the image] be placed?” he continued. “Will there be the potential need for negative space around the subject for copy?” Rosogin said he feels basic forethought helps ensure a successful product. 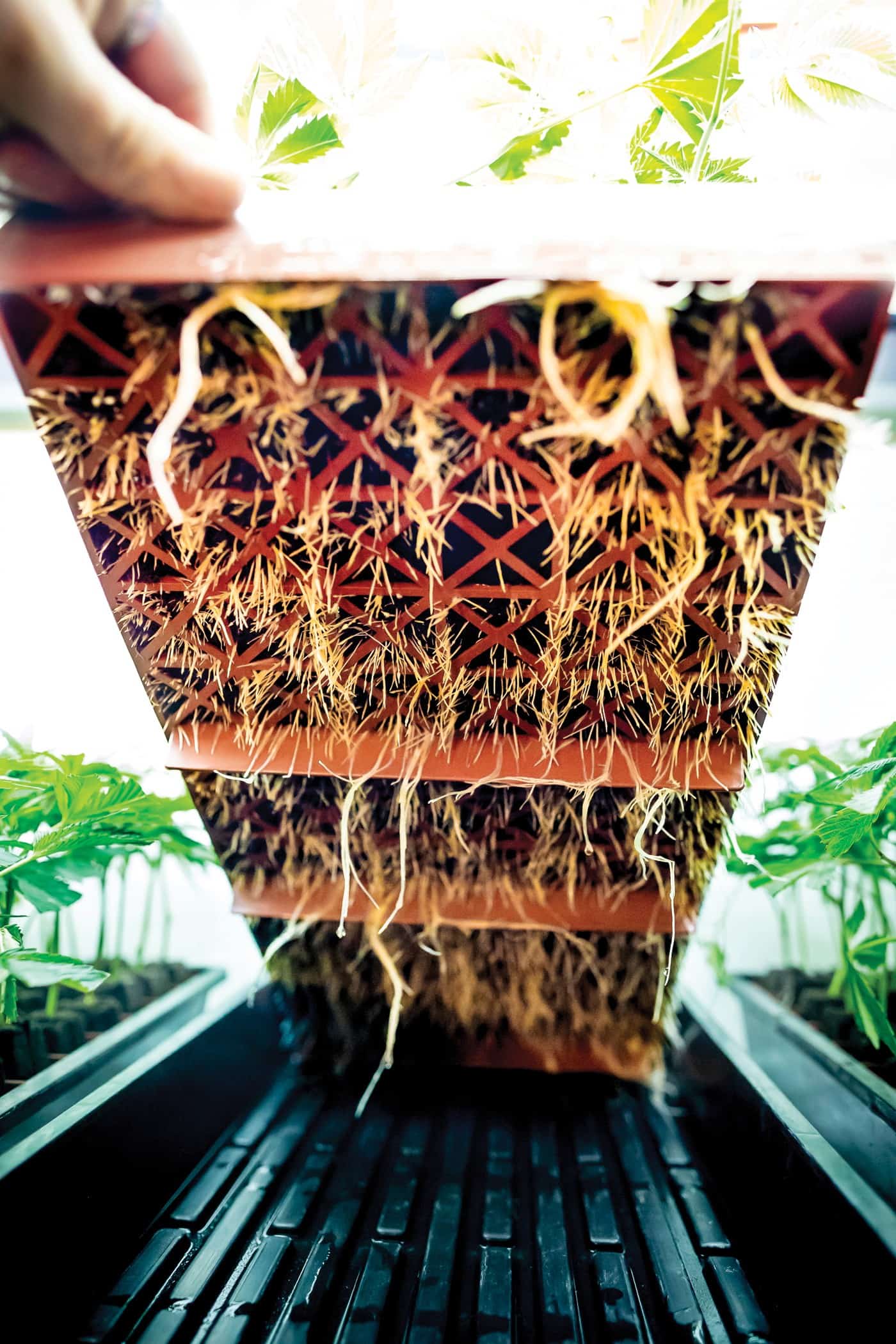 Because they’d like to improve all cannabis businesses’ access to powerful imagery, the Outer Elements team has devised a new program that will help dispensaries with modest budgets create their own images. “One of the services we will soon be offering is a studio lighting package that will be relatively affordable and produce consistent, top-quality results,” Rosogin said. He and Goldstein will help clients set up the equipment and instruct them about effective usage. The effort is designed to provide dispensaries with the ability to personalize menus, among other things.

Ultimately, Outer Elements is documenting one of the most unique industries and movements ever. “It’s an honor to do what we do, and that’s why we take it so seriously,” Goldstein said. “Some of the very best people we’ve had the pleasure of meeting work in cannabis. That certainly makes things not only easier, but also genuinely path-reaffirming.”