With fewer than three months to go until recreational cannabis sales start in California, a literal patchwork of regulatory challenges looms over the market rollout. More than 500 county and city jurisdictions have implemented their own regulatory schemes for medical marijuana sales and now must comply with quickly developing state regulations. A smooth transition may be difficult, at best, for state officials, industry stakeholders, and consumers.

A bug in the works, almost literally, is the big, fat spider mite sitting in the middle of the grow room. Mr. Mite and his party-crashing friends (mealy bugs, aphids, caterpillars, etc.), happily munching away on crops, have led to a problem for legal cannabis: pesticides and other contaminants.

In October 2016, national media attention focused on Steep Hill’s announcement of results from a related month-long study. Headlines screamed 80 percent of California cannabis samples submitted for testing showed positive for pesticides, despite growers’ insistence their production processes had been clean, even organic. 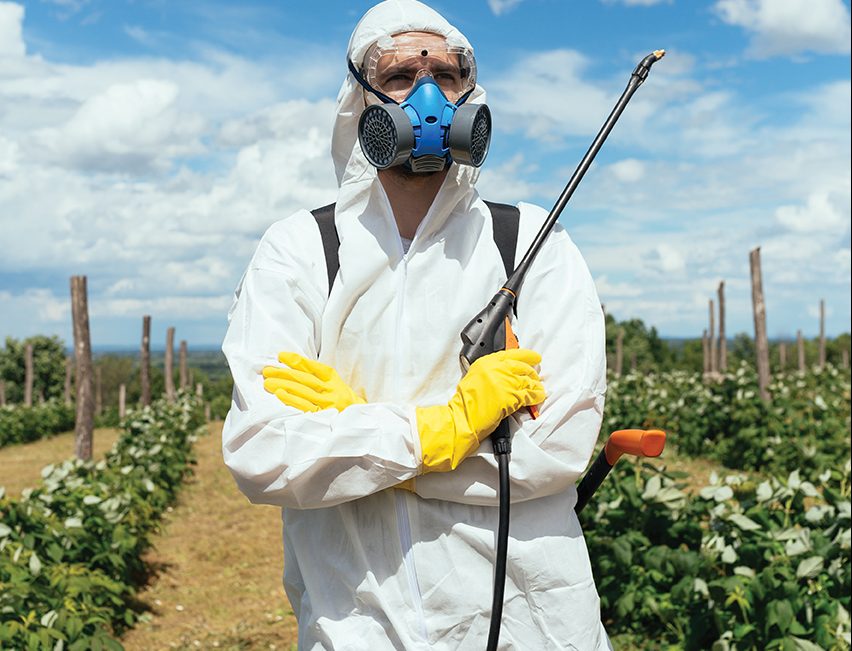 “When we released the first study on pesticides in October 2016, many growers approached Steep Hill saying that they did not use pesticides, they were organic, they were trying to do the right thing for their patients and consumers,” he said. “After hearing this over and over again, we knew there was something wrong in the supply chain. It dawned on me: It’s in the clones. We started formulating a plan to discover the root of the problem, because our mission is to make sure that growers have all of the tools and expertise needed to successfully pass new California regulations.

“We undertook this study to understand the concern of our clients who were also perplexed by the pesticide reports we were issuing,” Keller further stated. “The conclusions in the study indicate a significant number of failures at the clone stage. We realized that serious problems in the California cannabis supply chain could result in 2018, if the very source material from which the cannabis was being grown for large-scale production was already contaminated with pesticides failing current regulations.”

The Root Of The Problem

“Unsafe types and amounts of pesticides are not required to grow cannabis,” said Hezekiah Allen, executive director for the California Growers Association. “That type of pesticide use is a symptom of unhealthy, industrial agricultural practices. Lots of cannabis is grown sustainably in California every year.”

Allen, like any other responsible cannabis grower, would like to see reasonable regulation for the cannabis industry. Ideally, well-thought-out policies and standards would put the priority on producing safe products for consumers while making sure not to overregulate, thereby driving out small businesses and farms.

“As long as regulations solve a real problem, then we don’t think overregulation is possible,” Allen wrote in an email. “We have a responsibility to grow safe, sustainable products. If regs focus on those outcomes, there is no problem. The problem comes when regulations are enacted with no clear reasoning.” 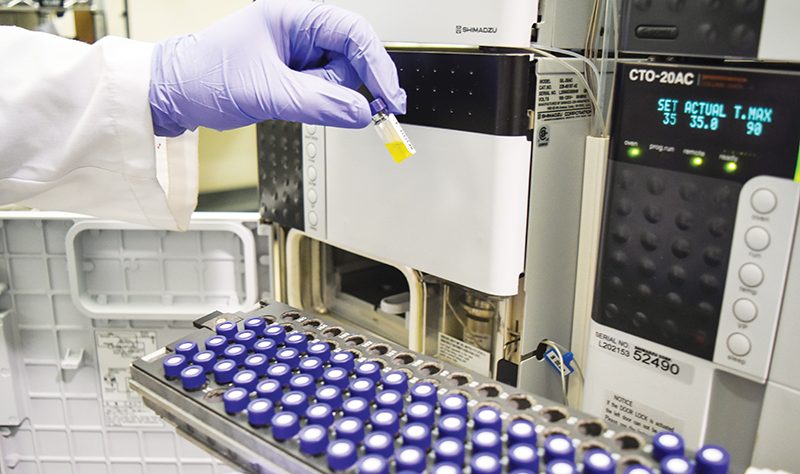 Then, pointing out an issue with regulations that vary by jurisdiction, Allen added, “Our members are less concerned about the pesticide regs than they are about the failed approach to microbial contamination in the Berkeley regs that have become the norm in the last few years.”

City of Berkeley Ordinance No. 12.27.070 outlines requirements for cannabis production, including product safety, quality assurance, and labeling. The ordinance requires testing for the presence of contaminants and mandates permissible amounts of pesticides, microbial contaminants, and residual flammable solvents.

Under the Berkeley regulations, “EPA-approved pesticides commonly used in cannabis cultivation” are permissible to 100 parts per billion, or PPB. Microbial contaminants including APC4, yeast, mold, coliforms, pseudomonas, salmonella, and E. Coli are measured in CFUs, or colony-forming units, and are restricted to various acceptable levels.

Currently, the state’s Department of Consumer Affairs’s Bureau of Cannabis Control, the Department of Food and Agriculture, and the Department of Public Health are evaluating the proposed California Medical Cannabis Regulation and Safety Act and the Adult Use of Marijuana Act, which would set state standards for industry testing requirements and acceptable contaminant levels.

“There should be testing for pesticides, but not be any more onerous than any of the agricultural thresholds,” said Dr. Reggie Gaudino, Steep Hill’s vice president for Science, Genetics and Intellectual Property. “In other words, no better or worse status.”

One important point upon which industry members, experts, advocates, and lawmakers agree: Researchers should study all aspects of cannabis’s impact as a consumable crop, especially when science serves the interest of consumer safety. Properly documented research has been prevented by legal limitations at the federal level, even as legal states attempt to develop regulatory schemes, businesses are trying to move into compliance, and markets are rapidly expanding.

There should be testing for pesticides, but not be any more onerous than any of the agricultural thresholds. —Steep Hill’s Dr. Reggie Gaudino

“Pesticide use in tobacco was banned, so there are no studies on the effects of inhalation of pesticides. There are limited studies from Europe that can provide guidance, but they limit pesticide use more than we do, generally,” Gaudino said. “GRASS is generally regarded as safe, and certain compounds in 25B will most likely to be found safe and effective as insecticides. Not all compounds, but certain categories could be helpful.

“We know where to look, but the studies need to be completed,” he added.

California industry proponents also have noted Oregon’s rollout of adult-use sales in late 2016 nearly was derailed by implementation of strict rules for pesticide testing, as well as lack of accredited labs to handle the influx of crop samples needing to be tested. Weeks-long delays in test results from state-accredited labs meant some of Oregon’s 400 dispensaries had to lay off staff and were low on inventory until the issues were resolved. Oregon growers also complained about increased testing fees.

“The studies need to be done so we know what to ban completely for and inhalation impact. We would like an outright ban on myclobutanil for use on cannabis because we know it turns into cyanide gas when heated. As an industry, we must embrace supporting our ecosystem through the minimized use of pesticides,” Gaudino said.

With potentially stringent state regulations for pesticides currently under evaluation and Steep Hill’s announcement pesticides are evident at the clone level, what is a sustainable resolution for producing the safest consumer cannabis products possible and safeguarding the environment while still seeing returns on investments?

Are industrial farming methods inevitable, as demand for products increases? Will small growers interested in maintaining pesticide-free environment be limited to smaller-scale production by those practices, while large growers allow acceptable levels of contaminants in order to accommodate larger crops? For “organic” growers: With 86 percent of clones currently testing positive for pesticides, are there safe alternatives for stocking crops and seeds? 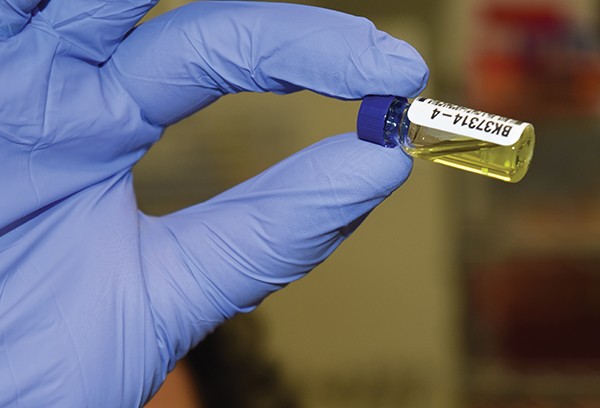 “The clone problem in California is clear; we suspect it is an industry-wide issue,” Steep Hill’s Gaudino said. “We know that farmers who use organic processes are better off than those who don’t. We can’t rule out ground soil or water issues.

“We have never had the opportunity to test large batches of seeds—hard to come by and expensive—[but] if someone wants to donate seeds to us in large batches, we are more than happy to study them and release our findings,” he continued. “The amount of pesticides in seeds is assumed to be very low—but we need to prove it.”

Right now, all anyone has is “an educated guess,” Gaudino added, regarding assumptions about low levels of pesticides in seeds.

For growers, avoiding the pesticide issue by implementing alternative pest-control methods increasingly may become the option of choice and most sustainable solution. Gaudino agreed, saying, “This means embracing alternate methods of protection, like integrated pest management.”

CGA’s Allen is pro-predatory-bugs for pest control and supports sustainable, healthy agricultural practices and business models. He goes farther, to recommend smallness of scale for California’s cannabis farms, which also would limit industrialization.

“Maintaining a limitation of a maximum one-acre of cultivation per farm would probably be the best way to help the most possible growers succeed,” he said.