The symbol is a green upside-down triangle with a pot leaf symbol in the middle and the phrase “Contains THC” above it.

The state Department of Licensing and Regulatory Affairs (LARA) also released regulations on data requirements for marijuana packaging under the “Medical Marihuana Facilities Licensing Act.” These additional regulations focus on additional data such as potency levels and date of harvest.

LARA is expected to be issuing licenses for cultivators, laboratories, and retailers soon with the new regulations being released in anticipation of this.

The additional requirements are the result of Rule 38 and Rule 39 which were filed as part of Michigan’s “Emergency Rules” filed on December 4, 2017.

Below is an excerpt from a bulletin released from LARA:

Rule 38 requires that prior to being sold or transferred, a marihuana plant must have a package tag affixed to the plant or plant container and enclosed with a tamper proof seal that includes a “universal symbol if applicable.” Rule 39 requires prior to marihuana product being sold or transferred to by a provisioning center, the container, bag, or product holding the marihuana product must have a label that includes a “universal symbol published by the department.

A marihuana plant or marihuana product containing tetrahydrocannabinol (THC) that is being sold or transferred must be labeled according to Rules 38 and 39, and the labeling must include the following symbol: 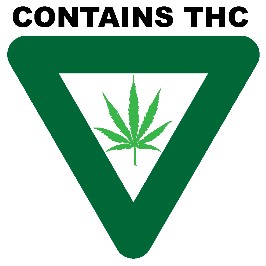 It is unclear if CBD products or hemp products will need the symbol. LARA states that if a plant or product does not meet the definition of “marihuana” (Michigan still uses this spelling) then the universal symbol is not required. But legal hemp products typically have a THC level of 0.3 percent or lower. Do products with such low levels of THC that cannot produce a psychedelic effect still fall under the state’s definition of marijuana?

The labels are seen as a way to warn parents and new patients about medical marijuana products. Colorado enacted similar requirements after a college student fell from a balcony after consuming marijuana-infused edibles. He was said to have ingested over six times the recommended dosage. Colorado’s packaging includes a red triangle and a warning exclamation point on all of their THC infused products. The packages are not permitted to include pictures of fruit, candy, or other images that could be seen as appealing to children.