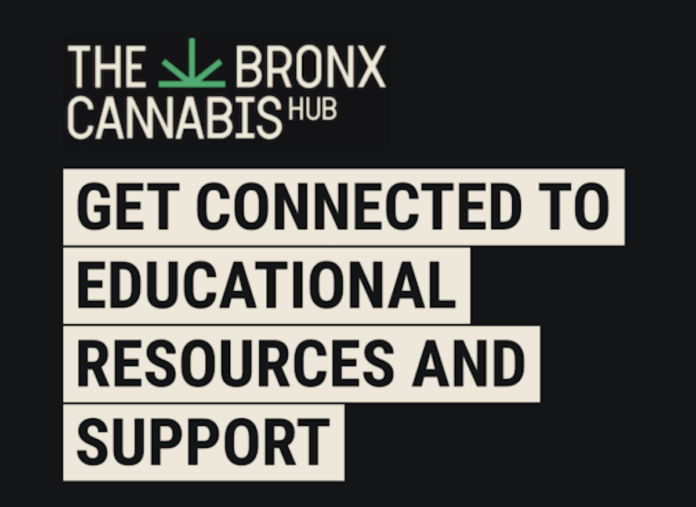 BRONX, New York — Today, The Bronx Defenders and The Bronx Community Foundation, along with U.S. Senator Chuck Schumer, New York State Senator Gustavo Rivera, and Bronx Borough President Vanessa L. Gibson, joined Bronx community leaders – including the Drug Policy Alliance, Mothers on the Move, 1 Freedom For All, TakeRoot Justice, and All That Jive NYC – who have spent decades fighting for cannabis legalization and undoing the decades of harm caused by its criminalization, to announce the launch of The Bronx Cannabis Hub.

“As public defenders, we have seen first-hand the impact marijuana criminalization and its racist enforcement by the NYPD has had on the people in the Bronx,” said Justine Olderman, Executive Director of The Bronx Defenders. “For decades, a single marijuana arrest could result in a person losing their job, healthcare, home, and even separation from their children and deportation from their families. Now that cannabis is legal, a new economy is taking shape, and the communities most harmed by this failed drug war must be at the forefront. We are proud to join The Bronx Community Foundation and our other partners today to launch The Bronx Cannabis Hub, a new resource that will provide critical training, guidance, and legal support to turn historical harm into economic opportunity.”

“Communities of color in The Bronx have suffered disproportionately from the harms of cannabis prohibition, from arrest and incarceration to job loss and eviction,” said Desmon Lewis, Co-Founder of The Bronx Community Foundation. “The Bronx Community Foundation is proud to partner with The Bronx Defenders on The Bronx Cannabis Hub, a first-of-its-kind initiative that will right some of these historic wrongs, by helping our communities to participate in the new, legal cannabis industry. In doing so, The Hub will further The Foundation’s goals of advancing neighborhood stability, solving systemic and institutional challenges, and building generational wealth.”

The Bronx Cannabis Hub is a new resource designed to give Bronx residents harmed by decades of cannabis prohibition the means to participate in the new, legal cannabis industry. A project of The Bronx Defenders in partnership with The Bronx Community Foundation, the Hub also aims to work in coalition with Bronx-based community organizations to educate, engage, and advocate for Bronxites in the cannabis industry. The Hub will also launch a clinic in partnership with cannabis legal expert Cristina Buccola, Esq., in tandem with pro bono law firms and support from the New York Cannabis Project, to assist eligible candidates with the licensing process and create educational programming.

“We are thrilled to see the launch of the Bronx Cannabis Hub as a true community resource supporting social equity in New York’s legal cannabis landscape. During the decade-long fight to pass the Marijuana Regulation and Taxation Act we were clear that the people and communities most impacted by devastating enforcement of the marijuana arrest crusade should be those to benefit from the legal industry. The Bronx Cannabis Hub will be a crucial part of fulfilling that shared vision and opening up opportunities and avenues for community members – especially those who have been directly impacted – to thrive in New York’s new green era,” said Kassandra Frederique, Executive Director, Drug Policy Alliance.

“The cannabis economy will give black and brown communities a chance to build generational wealth as we heal from the war on drugs and poverty,” said Wanda Salaman, Executive Director of Mothers on the Move. “Marijuana is a plant many of our ancestors traditionally used for healing. We are happy to partner on The Bronx Cannabis Hub to make sure those most impacted benefit the most.”

“We support community-led efforts. And the work we are set out to do with this hub will bridge the wealth gap created by the “war on drugs” (a.k.a the war on black and brown people), and it will create transgenerational wealth to those same BIPOC communities devastated by this fake war. FREE THE PLANT, FREE THE PEOPLE!,” said Hector Gerardo, Executive Director of 1 Freedom For All.

“The mission is to support people who have been the most impacted, who want to be educated on the plant and/or interested in entering the legal marijuana industry and directing the economic benefits of the marijuana industry back into our communities that have been violently targeted and devastated by the Drug War.  Only true democracy will achieve the progressive change we need, especially in this “new” industry, and we look forward to supporting the community/families as they rebuild the livelihood that was taken from them because of outdated racist policies,”  said Pilar DeJesus Senior Advocacy Coordinator at TakeRoot Justice.

‘It’s an honor to work on righting some of the harms caused by the War on Drugs by lending my expertise as an attorney and educator to The Bronx Cannabis Hub,” said Cristina Buccola, Esq., a Founding Collaborator. “I’m thrilled to be a part of this program to develop top-tier educational programs and vetted legal services for New Yorkers who’ve experienced the greatest disparate impact due to cannabis enforcement.”

“For far too long, the criminalization of cannabis and the War on Drugs has ravaged Black and Brown communities throughout New York – divesting millions of dollars from these communities through the racially disproportionate enforcement of marijuana laws,” said Akele Parnell, New York Cannabis Project. “Now, as cannabis prohibition comes to an end, New York is on the verge of launching a multi-million dollar cannabis industry, and it’s critical that the communities most harmed by cannabis prohibition are at the forefront of this new industry. The Bronx Cannabis Hub will provide critical training, information, resources, and support to those disproportionately impacted by the War on Drugs who are looking to enter the regulated cannabis industry.”

When New York passed the Marihuana Regulation and Taxation Act (MRTA) last year, it did more than just legalize adult recreational cannabis use and pave the way for a regulated cannabis industry in New York – it also committed to repairing the historical harms of cannabis prohibition and guaranteeing fair and equitable access to the new cannabis economy in three distinct ways:

Automatic expungement of past cannabis convictions; Community investment (40% of tax revenue from cannabis sales invested back into communities disproportionately impacted by cannabis arrests); and Social equity in licensing.

Social equity in licensing means that those most harmed by the war on cannabis should be first in line to get licenses to participate in the new, legal market.

“The Bronx Cannabis Hub will catalyze a new generation of cannabis entrepreneurs in a borough that bore the burdens and injustices of the War on Drugs. It is an example for New York and the nation – paving the way for communities and individuals to seize the opportunity for renewal marijuana reform provides,” said U.S. Senator Chuck Schumer.

“I am so proud that respected, trusted Bronx leaders are stepping up to provide free application assistance for cannabis licenses. The Bronx is deeply impacted by overcriminalization and aggressive enforcement of a failed war on drugs, so it’s high time that our community benefit first from economic opportunities in the cannabis economy,” said State Senator Gustavo Rivera, 33rd District, The Bronx. “I’m thrilled to support these efforts to ensure that justice-involved and impacted community members can obtain licenses and generate wealth for our neighborhoods.”

“Once underground, the cannabis industry is coming into the light, and it is important that our borough take full advantage of the social and economic benefits to our communities,” said Bronx Borough President Vanessa L. Gibson. “I want to thank The Bronx Defenders and The Bronx Community Foundation for putting equity and social justice in the forefront through their launch of The Bronx Cannabis Hub to educate and empower our residents through this process. The legalization of cannabis is a first step towards undoing the damage caused by years of disproportionate mass incarceration and prosecution of Black and Hispanic New Yorkers, who have suffered under unfair drug laws and policies in our country.”

New York is now set to start handing out these licenses, and the state has made clear that the first 100-200 retail dispensary licenses (Conditional Adult-Use Retail Dispensary or “CAURD licenses”) are reserved for individuals who have a cannabis-related arrest or who have a close family member with such an arrest.

Unfortunately, the application process is complicated, and there are bad actors who have emerged to take advantage of this by charging exorbitant fees and entering into predatory contract agreements. After consulting with community groups, staff, elected officials, and coalitions in this space, it became clear that for these social equity provisions to work, there needs to be non-predatory resources and support to help Bronxites apply for these licenses.

One of the first orders of business for the Hub will be to help screen potential candidates for eligibility for the CAURD licenses. On Wednesday, July 20, the Bronx Community Hub held its first educational webinar to discuss how to navigate applying for a license and explaining how the Hub plans to support Bronx-based community leaders to keep the state accountable.

The Bronx Defenders (BxD) is a public defender non-profit that is radically transforming how low-income people in the Bronx are represented in the legal system, and, in doing so, is transforming the system itself. Each year, BxD defends more than 20,000 low-income Bronx residents in criminal, civil, family court, and immigration cases, and reaches thousands more through its community intake, youth mentoring, and outreach programs.  BxD was a core partner in the StartSmart Coalition, which advocated for and ultimately won passage of the MRTA. Post-legalization, BxD has taken the lead in educating lawyers and community members about the details of the law.

The Bronx Community Foundation (BxCF) is the first and only community foundation in The Bronx, solely dedicated to delivering resources to the entire borough. BxCF supports and invests in community power to eradicate inequity and build sustainable futures for all Bronxites.  BxCF’s vision is building community power and generational wealth across the Bronx to harness the energies of many community partners to identify problems and co-create solutions.

Cristina Buccola, Esq. is an attorney, advisor and educator focused on assisting small businesses, social equity groups, and legacy market entrepreneurs with cannabis licensing, legal and business matters, and regulatory requirements. She works with elected officials on their cannabis platforms, testifies in front of legislative bodies about cannabis matters, and was a core member of the StartSMART coalition, one of the groups responsible for pushing New York’s historic cannabis legalization over the finish line. She also designs and teaches cannabis courses at the law school and university levels (Pace and CUNY, respectively).