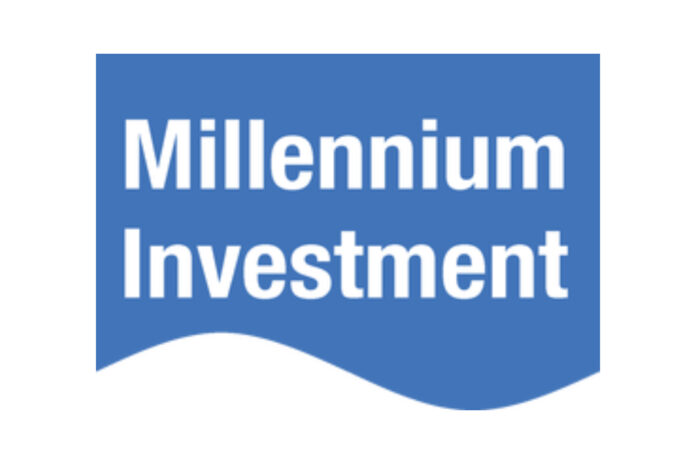 Old Bethpage, New York – Millennium Investment & Acquisition Co. Inc. (US-OTC: MILC) (“MILC” or the “Company”) today announced that it has agreed to invest in a newly formed cannabis operator Walsenburg Cannabis LLC (“WC”). As part of the transaction, MILC has agreed to lend capital to WC for its business operations and MILC is in the process of obtaining regulatory approvals for holding cannabis licenses in Colorado. Upon receiving regulatory approval, it is contemplated that MILC would become the majority owner of WC in the form of a preferred equity ownership stake.

Simultaneous with MILC’s investment, WC entered into a long-term lease (the “Lease”) for real estate purchased by Power REIT (NYSE-AMEX: PW and PW.PRA). David H Lesser, MILC’s Chairman and CEO is also Chairman and CEO of Power REIT. The approximately 22.2 acre site includes existing greenhouse and processing space (the “Property”). As part of the Lease, Power REIT has agreed to fund the rehabilitation and upgrading of the existing improvements and the construction of additional greenhouse space. Upon completion of this work, the Property will have a total of approximately 102,800 square feet of greenhouse and related space. MILC’s total capital commitment for the project is $750,000.

David Lesser, MILC’s Chairman and CEO, commented, “This transaction represents a new area of focus for MILC as MILC seeks to transition from an Investment Company under Securities and Exchange Act of 1940. As previously disclosed, MILC is actively selling its sole investment in securities and is converting to an operating business with two areas of focus: sustainable cannabis cultivation in greenhouses and production of activated carbon. MILC is enthusiastic about the prospects for these two focus areas and I look forward to announcing additional exciting developments in the near future.”

Jared Schrader, Walsenburg Cannabis’ President, commented, “The Property is subdivided into five parcels that each have local approval for the cultivation of cannabis. This allows the Property to pursue a rapid growth plan given the nature of Colorado cannabis licensing which is based on a limited plant count initially per property. Once performance is demonstrated to the regulators, each property will have the potential to “tier-up” and add more plants. Based on the initial property configuration, WC intends to quickly establish approximately 11,000 cannabis plants which can be harvested approximately five times per year. Based on recent prices for cannabis in Colorado, this would result an annual run rate of revenue in excess of $10 million. Colorado was the first State to legalize cannabis and is currently the second largest cannabis market in the United States which continues to generate significant demand growth.

Mr. Schrader continued, “I believe this property can quickly become a large-scale producer of cannabis and cannabis related products to serve the Colorado Market which is the second largest cannabis market in the United States. I am excited to team up with both MILC and Power REIT to get this project growing.”

Deregistration as a 1940 Act Company

On October 14, 2020, shareholders approved a proposal to change the nature of the Company’s business from a registered investment company under the Investment Company Act of 1940 (the “1940 Act”) and to a holding company that focuses primarily on owning and operating businesses that produce activated carbon and acquiring other private businesses (collectively, the “Deregistration Proposal”).The Company is in the process of implementing the Deregistration Proposal so that it is no longer an “investment company” under the 1940 Act and has applied to the Securities and Exchange Commission (the “SEC”) for an order under the 1940 Act declaring that the Company has ceased to be an investment company (the “Deregistration Order”).

MILC continues to focus on the liquidation of its sole investment in securities – its investment in SMC and plans to invest the proceeds in operating businesses. MILC currently believes it will fully liquidate its position in SMC before the end of the current quarter although there can be no assurance as to when or if such liquidation will occur.

Millennium Investment and Acquisition Co. Inc. (ticker: MILC) is an internally managed, non-diversified, closed-end investment company. During 2020, MILC announced that it was seeking to de-register as an Investment Company that is regulated under Investment Company Act of 1940. MILC is currently seeking an Order from the SEC declaring that it has ceased to be an Investment Company as it no longer meets the definition of holding itself out as investing in securities but rather has pivoted to focus on direct investments in operating businesses.

Additional information about MILC can be found on its website: www.millinvestment.com

Power REIT (ticker: PW and PW.PRA), with a focus on the “Triple Bottom Line” and a commitment to Profit, Planet and People is a specialized real estate investment trust (REIT) that owns sustainable real estate related to infrastructure assets including properties for Controlled Environment Agriculture, Renewable Energy and Transportation. Power REIT is actively seeking to expand its real estate portfolio related to Controlled Environment Agriculture for the cultivation of food and cannabis.

Additional information about Power REIT can be found on its website: www.pwreit.com