Before marijuana started becoming almost gentrified, the market price of weed was set by the person selling it. They based their price largely on what it cost them to procure the then-illegal substance, along with the risks of operating, as well as how much demand there was for their supply. Of course, a dealer always would say they had premium-quality cannabis and that’s why their prices were what they were, but consumers couldn’t be sure of that.

As legalization expands across the country and Congress toys with the idea of federal legalization, the playing field between seller and consumer is leveling and the cost of cannabis is becoming easier to predict.

The information is out there for consumers to inform themselves about strains and producers, enabling consumers to be more certain what they are paying for at the local cannabis boutique. Pricing now is less random and is, in fact, based on some pretty simple concepts.

Quantity is the first point of comparison

The most elemental way of comparing any two options is quantity.

Typically, cannabis is available in the following quantities:

Most shops mix metric and imperial measurement systems, as above, quoting prices for ounces and partial ounces when the ask is for a larger quantity and grams for smaller purchases.

What’s a gram? Picture a standard soda bottle cap as a visual guide for a gram. One joint typically weighs slightly less than three quarters of a gram, so a full gram typically will produce one and one-half joints. Looking at the other quantities noted above, this is roughly how that translates in terms of number of joints:

Across the United States, the average price per ounce varies widely, running anywhere from $6 to $12. Many factors influence prices, starting with the quality of the cannabis.

Quality matters when it comes to pricing

The above-quoted average prices are based on medium-quality marijuana. If you want to compare apples to apples, however, you must consider quality. In fact, at the prices in two different but reasonably local shops, quality likely is a major factor when there’s a big price difference.

Quality assumes measuring many factors, but a major differentiator is how the product is grown. Organic, indoor growing styles are more costly than outdoor, mass-produced, or imported varieties. It’s like comparing a craft beer from a small brewery to a mass-produced beer from a major manufacturer. Craft beer costs more because of ingredients and production methods.

What else affects price?

Legal status in the state

If cannabis isn’t legal in a jurisdiction, then consumers rely on the dealer to provide them with a product at significant personal risk. In that case, as mentioned earlier, consumers have no control over quality or price. You can’t comparison shop between backdoor dealers, at least not if you want them to sell to you again.

In states where recreational marijuana is legal, the market has many more participants and much more competition, which brings prices down based on consumer demand.

States where medical marijuana is legal require a doctor’s note for enrollment in the program. In the early days of legalization, this represented a significant hurdle and a significant factor in setting prices. Today, almost anyone can get an ID card for almost any reason, so the hurdle no longer exists.

Washington D.C. is a unique market. In a strange legal turn of events, consuming cannabis—both recreationally and for medical purposes—is legal, but buying and selling aren’t. Result? The price per ounce is almost twice the national average.

Cannabis can’t be cultivated outdoors just anywhere. The plants like stable warmth averaging around 80 degrees in the daytime and don’t thrive where temperatures fluctuate a lot or reach higher than 88 degrees or below 60 degrees on a regular basis. It’s not impossible to grow cannabis in extreme weather, but it’s more difficult and the end result is a lower-quality plant with less THC.

How cannabis is grown affects not only quality but also price. Higher-quality products always will be more expensive because more went into producing them.

Obviously, the ability to control, through technology, what are otherwise uncontrollable elements of nature creates a higher-quality product. Everything from pest control to managing humidity and issues like mold are within the grower’s control. The lighting technology employed indoors can harness the power of specific spectra to maximize production quality.

If the grower uses organic methods, the final product will be a higher, cleaner quality, which is a huge benefit to the end consumer but does cost more.

Where cannabis is purchased makes a difference too. A local corner shop might not have huge overhead compared to a high-end bud boutique on a main street, and that factors into the price the consumer pays.

Well trained and adequately paid staff, clean and approachable premises, and just keeping the lights on adds to the cost of selling. Legal dispensaries must abide by packaging and labeling regulations, so consumers can be sure the source of the product, what’s in it, and even production parameters like whether the cannabis is organic. Considering cannabis is meant for ingestion, it’s well worth having a good understanding of what one is putting into their body.

Competition, particularly within a certain geographic area, will bring the price per gram down. Supply and demand is a basic economic concept: When demand exceeds supply, prices go up.

Tremendous tax revenue opportunity hasn’t gone unnoticed by the powers that be in the states where marijuana is legal. In addition to cannabis-specific “sin taxes,” sales tax likely also applies, and in some cases the rate is even higher for cannabis than other consumer goods. Take Colorado, for example: The  sales tax rate in that state is 2.9 percent. The sales tax rate for marijuana is 10 percent.

Taxes also come at the other end of the production / sales cycle, as legitimate dispensaries and boutiques pay taxes on products and services for their shops, and growers pay taxes on production items like light bulbs as well as on packaging materials, transportation of the final product, and so on. Due to federal tax laws that disallow tax deductions for companies trafficking in illegal substances, many standard business deductions are not available to cannabis businesses. That extra expense is passed on to consumers.

When purchases are made

Strawberries are more expensive out of season than they are in July. That’s just the way it goes with any cultivated product. Cannabis harvest time is in the early autumn, around September. That’s when consumers will find the best prices. Remember: supply and demand. If there is more supply and demand is steady, the price will drop.

A major advantage of federal legalization likely will be a greater tendency to standardize pricing of this latest commodity on the crop market. And as the consumption of marijuana moves to the mainstream, the production cycles and available options will be easier to track and predict. For growers, their unique selling proposition will be focused on quality. For the end consumer, that can only be a good thing. 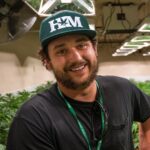 Anthony “Ant” Franciosi is an honest-to-goodness farmer whose fingers are as green as the organic cannabis he grows. He is the proud founder of Honest Marijuana, an all-natural, completely organic marijuana growery in Colorado.