Michael Bowman on the state of farmers, the uncertainty in Washington D.C., and why hemp is good for the environment and economy.

On a sweltering July night, Michael Bowman entered the Washington, D.C., watering hole The Dubliner to meet a member of Law Enforcement Action Partnership with ties close to the White House. As a longtime advocate for federal public policy that strengthens rural communities with a focus on soil health, biochar, renewable energy, and environmental markets, Bowman has been to the United States capitol many times. But this trip was different. Since the passage of Colorado’s Amendment 64 in 2012, his focus has turned exclusively to industrial hemp policy. His decade-plus of work in sustainability issues garnered a robust bipartisan network that trusted him.

“This trip was purely agenda-driven due to what the industry has been missing since November’s election—namely, a president with still no clear message or directive regarding our industry,” said Bowman, a bearded, avuncular man with a calm demeanor and an intense gaze.

“Hemp is a drought-resistant plant. It needs little or no herbicides and pesticides. It has a root structure that improves the tilth of the soil [and] can absorb four times more CO2 per acre per crop than a standing forest. Suddenly, I found every box on my list of attributes of a ‘dream crop.’” —Michael Bowman

However, if anyone can get their attention and act in order it’s Bowman. In 2013, he wrote the draft language for Section 7606 of the Federal Farm Bill, and he made possible the first hemp flag flown over the U.S. Capitol building in eighty years. “I’ve been elbow-deep in this movement, but during this visit it was easy to forget all we’ve accomplished,” he said, his gaze a bit downcast.

Bowman’s trip would be one meeting after another with D.C. political movers and shakers, private-sector business people, and entrepreneurs, discussing industrial hemp and its application to soil regeneration, reducing chemical and pesticide loads on farmland, CO2 absorption, and land-based opportunities to mitigate the collapse of oceans. Though the trip proved positive overall, it also proved somewhat disappointing. “Right  now, when it comes to hemp, we are in a holding pattern with no indication from air control when we’re going to finish circling.”

Why hemp? Why now?
The environment is what brought me to hemp. It was around a campfire in Zimbabwe in 2003 when I met an Australian couple who had just visited India. [We discussed] the transition there from a hemp-based economy to a government-mandated GMO crop. Before that fateful conversation, I knew nothing about the plant.

This conversation drove me to study the plant and, once I understood its history and politics, I was hooked. Hemp is a drought-resistant plant. It needs little or no herbicides and pesticides. It has a root structure that improves the tilth of the soil [and] can absorb four times more CO2 per acre per crop than a standing forest. Suddenly, I found every box on my list of attributes of a “dream crop.”

How does hemp impact the environment?
Like any crop, it shouldn’t be mono-cultured; it’s a rotational crop. If grown properly, it can play a significant role in the soil regeneration movement. Hemp is sometimes confused with the environmental footprint of indoor marijuana cultivation. There is a lot of debate today regarding that footprint and how to lower the impacts. California has taken a big leap in regards to the renewable energy requirement for these facilities. I’d offer that side of the industry has a way to go. However, industrial hemp as an agricultural crop is pretty straightforward and environmentally benign. 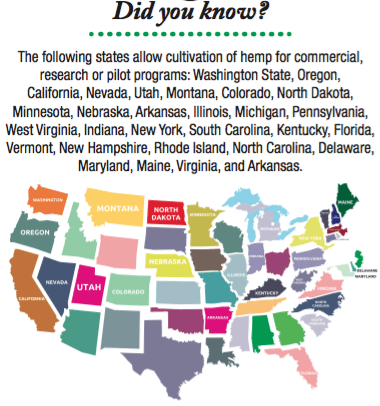 What’s the current state of U.S. hemp farming?
Under federal law, the 2014 Farm Bill, Section 7606, farmers in states where hemp is legal are permitted to grow industrial hemp. We have over thirty states that have passed some form of legalization; last year one-half of all hemp acres in the U.S. were grown in Colorado, with Kentucky a close second. The industry is like dry tinder with matches being lit around the edges. In addition to the federal protection we enjoy under the Farm Bill, Senate Majority Leader Mitch McConnell has inserted riders into both the 2016 and 2017 omnibus acts that prohibit federal agencies from interfering in 7606-compliant grows. I hear, through the California grapevine, there are 200 acres being grown this summer.

What have been your biggest challenges when meeting with politicians?
We have a reportedly $700 million market in the U.S., the largest consumer market in the world, yet our farmers are in technical violation of the Controlled Substances Act. We cede our demand to imports. Secondly, we’re the only G7 nation to prohibit [hemp] cultivation under federal law. Three, [hemp] was so important to victory in WWII that we suspended Prohibition in 1942, gave seeds to every 4-H Club in Kentucky to multiply, built forty-three processing plants where farmers grew in excess of 35,000 acres for fiber, [and] yet our government still thinks a Schedule I classification is appropriate.

What are some of the sustainable aspects of hemp?
We’re in the throes of the third industrial revolution and an explosion in scientific knowledge. We’ve only just begun to understand the range of phytocannabinoids and their application to our health, wellness, and materials. Hemp is a suitable replacement for concrete. It can help end our overexposure to pesticide and herbicide applications in our food supply. From the production side, we have a lot we can learn from nations like Israel, where drip technology and precision fertilizer application are far beyond the technology we use [in the U.S.] today. Unfortunately, these discoveries continue to be held at bay with a Schedule I designation. Federal labs and institutions of higher learning shy away from this research for fear of losing their federal dollars.

The Making of Mr. Hemp
1977: Receives an agricultural degree from Colorado State University before attending the University of Arkansas.
1981-2001: Actively engaged in family’s fifth-generation Colorado farm, which pioneered crop rotation as a means of reclaiming land for commercially grown sunflowers.
2004: Co-Founds the Colorado Farm-to-Cafeteria Work group, placing the farm to cafeteria movement at the forefront of the fight to end obesity.
2006: Chairs governor-elects Bill Ritter’s energy transition team and worked with his staff to pass over 50 pieces of “Green” legislation in 4 years.
2013: Appointed to the Colorado Industrial Hemp Commission by Governor John Hickenlooper. U.S. Senate agrees to include House amendment in final farm bill language.
2015: Becomes founding board of directors chairman for the National Hemp Association.
2017: Forms War Hemp Industries Corporation and begins work on Hemp

What advice would you give someone who wants to start a hemp farm?
As a fifth-generation member of an agricultural family, I understand the importance of bringing young people into this industry. In the past 30 years, we’ve seen the average age of the U.S. farmer increase from 50 to 58. However, I’ve never witnessed a time in my adult life where a single new opportunity like hemp has ignited the interests of so many young people. Simply put, the opportunities far surpass the challenges.