Black entrepreneurs helm fewer than 2 percent of the marijuana businesses in the United States. While President Joe Biden’s October statement about reform led to hope of creating a more equitable industry, the pardons he issued will result in relief for only about 6,500 people convicted of simple possession between 1992 and 2021—nationally.

For true reform to happen, similar pardons need to be issued at the state level in every state. In the meantime, it’s imperative local companies that now profit from commercializing a substance others remain jailed for take action to create a safe and equitable industry.

An important way retail brands can take action is by sourcing their products from companies with diverse backgrounds and that give back to the communities most affected by the war on drugs. I took this approach when sourcing products for my Boston dispensary, where minority-owned brands now represent one-third of the merchandise for sale.

Here are five tips I found helpful as I made decisions about which products my dispensary should offer. You, too, may find it beneficial to consider them when sourcing diverse and equitable products for your store.

Even before opening, I knew I wanted my dispensary to carry at least one-third minority-owned products. That percentage may not be achievable for you. Choose whatever is achievable, whether it’s 5 percent, half, or more. Having a goal in mind can help drive your overall strategy in sourcing products and create a ratio to work toward.

Some companies may claim to be “minority-owned” when only a small percentage of the ownership is part of a minority community or the minority owners hold only a minority stake. It takes more time, but doing the extra research to ensure a brand actually is owned and operated by a person or people of color (POC) ensures stable and honest partners.

Industry events are invaluable resources for finding reputable brands and companies. For example, Black CannaBiz is a minority-specific event that is great for discovering POC-owned businesses. At the local level, there are also state-specific events you can visit to network and select diverse brands to stock in your dispensary.

Consider brands that give back

Aside from seeking out minority-owned brands, also look for brands that give back to the community. Does the company pledge a portion of earnings to help minority-owned nonprofits or groups? Does it have any nonprofit affiliations that assist minority communities?

Partner with a minority distributor

Distributors can provide a gateway to discovering brand partners who create innovative products that sell well in dispensaries. Many distributors of minority-owned brands also are owned by minority entrepreneurs who may be able to suggest other brands they don’t represent.

Supporting minority businesses goes beyond supporting individuals and groups harmed by the war on drugs. In addition to providing a boost for your brand and profit margins as well as those of the product brand, diversity offers numerous benefits for the community. For every dollar the average White American gathers, the average Black American gets only about seventeen cents. By supporting Black-owned businesses, we can destigmatize certain cultural norms and create more wealth-building opportunities for minority groups, from meaningful savings and property ownership to credit-building and generational wealth.

The United States always has been a melting pot of cultures and ideas, and our businesses are a great reflection of this. By inviting brands and employees with different backgrounds to help build your business, you open your company to new ideas that ultimately challenge your way of thinking and promote growth. In fact, Harvard Business Review found teams solve problems faster when they are cognitively diverse.

The legal cannabis industry has been praised for creating jobs. A study released in February 2022 by Leafly and Whitney Economics found 2021 was the fifth year in a row the industry saw an annual job growth rate higher than 27 percent—to more than 428,000 workers. The report’s authors expect that number will continue to grow, with projections in the same study predicting the U.S. industry could employ 1.5 to 1.75 million workers after federal legalization. The more dispensaries that consciously choose to stock inventory from diverse brands, the more jobs will be available to minority workers.

By pledging to stock your dispensary with minority-owned and diverse brands, you will be taking direct action to create a cannabis industry that values diversity and creates an equitable place for minorities and people of color to flourish. 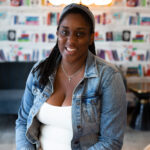 Nike John is founder and chief executive officer at The Heritage Club and The Heritage Home Foundation. At thirty years old, she founded the Boston-based cannabis dispensary and its nonprofit subsidiary to support safe cannabis consumption within her community and fight back against the war on drugs. John is the youngest dispensary owner in Boston.