For more than a decade, Garden of Eden resided in a nondescript building with mirrored windows and no signage. The utilitarian digs didn’t hamper the Hayward, California, dispensary’s success, but as the shop turned fourteen, the owners decided a makeover was in order. They turned to award-winning Bay Area design firm Sand Studios, whose clients include BMW and the Oracle Arena, for a dramatic design overhaul. 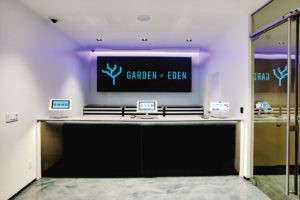 “I remember the first time going to Larissa Sand’s office and fabrication shop and thinking to myself, ‘This is gonna be good. Really good,’” said Chief Financial Officer Shareef El-Sissi. He was impressed with the industrial Scandinavian aesthetic Sand envisioned for the dispensary: marble, wood, soft back-lit fixtures, and custom metalwork.

Sand covered the shop’s exterior with welcoming ivy, leaving only the logo cut out and backlit against the foliage. Custom metal front doors, a hallmark of Sand’s design aesthetic, complete the facade. Inside, the lobby is warm and inviting with a simple wooden check-in desk, back-lit hues of purple, green, and scarlet, and cream-colored walls. Blinking state-of-the-art menus and educational flat screens dot the walls, and product display shelves have been carved out in various arcane shapes that are easy to peruse and futuristically groovy-looking. A brushed-marble floor completes the look.

“We were super-pleased with the outcome,” said El-Sissi. “We strive for perfection. I want to be the three-Michelin-star of dispensaries.” 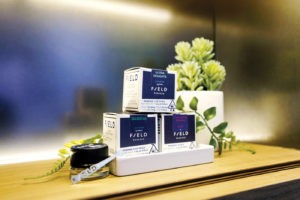 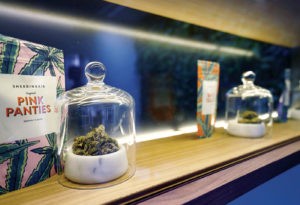 The dispensary’s building wasn’t the only thing to receive an update: Among other contributions to the new aesthetic, Barry Lai of Design Rehab redesigned the logo. Lai, a multidisciplinary art director based in San Francisco, is known for creating unique digital and analog experiences. “At the core of these solutions is visual communication, an art form that must be succinct, direct, and lasting,” he said.

Laid noted, “The red hue sparingly calls attention to important aspects. The idea behind the brand was to not only have it speak for itself, but also give the consumer a great out-of-box experience with everything from the remodel to the packaging.”

Color was employed to deliver a subliminal message in other ways, as well, according to Sand. “An ongoing exploration of thoughtful minimalism is what I was hoping to achieve through our color blocking,” she said. “The idea was to communicate quality through a clean, streamlined ecosystem. 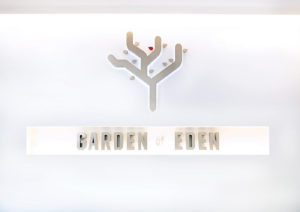 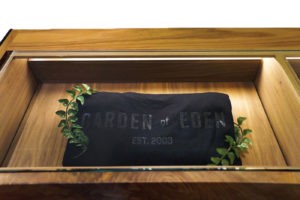 The Garden of Eden team wanted the remodel to coincide with the advent of adult-use. The objective: to have the entire project completed before what they expected to be tidal waves of new consumers began flooding the market and searching for a shop to call “home.” The team never intended to change the dispensary’s loyal base, but they did want to attract a wider demographic. “We wanted it to be eye-catching and for people walking by to be drawn in; to [want to know] what lies behind the greenery,” said El-Sissi.

According to Director of Sales and Marketing Nick Rose, the tactic worked. “I overheard an elderly woman and middle-aged gentlemen who were waiting in line,” Rose said. “The gentleman was saying how much nicer it felt to be in the store than before. I approached and asked them how long they had been customers. He responded, ‘Since 2010, but I never brought my mother along until you guys remodeled.’”

Although an important part of the agenda, broadening the demographic did not encompass appealing to everyone. “We have no intention of losing our DNA with the shifting supply in the market today,” he said. “We curate our offerings with a focus on quality and value. If you are into the Cheesecake Factory, we may not be your cup of tea.”

The shop’s new “merchandised coves” wall displays have thoroughly modernized customers’ retail experience, according to Sand. “We are habitual shoppers by nature, so it was important to consider Garden of Eden’s archetype of clients by populating these coves with the best flower,” she said. “Making clients’ experiences enjoyable while also providing them with anticipation for amazing seasonal goods keeps their expectations high and the shop’s design approach honest.”

The makeover addressed not only aesthetics, but also functionality. In addition to Garden of Eden, “we are also the founders of a retail management software named Treez that helps dispensaries become as efficient as possible,” said El-Sissi. As the redesign proceeded, the team leaned on the software’s ability to optimize retail operations. “I think we have accomplished the over-the-counter model quite well here,” El-Sissi said, adding Garden of Eden will serve as a prototype for expansion. “Our next shops will showcase the next wave of retail operations with less over-the-counter and more personal interactions.”

The redesign has had a significant impact, according to El-Sissi: The shop now sees a more affluent consumer, and sales are up by more than 50 percent. More than 800 customers visit on some days. El-Sissi admitted some of the increase in clients may be attributable to tax-based price increases at competing dispensaries. Garden of Eden’s prices haven’t changed. “We felt our customers were already paying the right price, so we chose not to inflate [them],” he said. “We survive due to our business relationships with vendors.”

He added, “Hayward is not a tourist area, so we focus on providing the best products to locals and connoisseurs.” 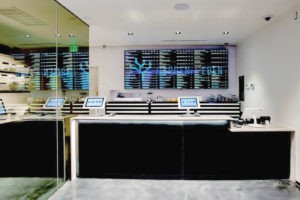