Sale of legal cannabis is a rare moment in retail history. It’s not often a prohibited substance makes the transition from backstreets to Main Street, but that’s exactly what’s taking place—and on a revolutionary, global scale.

For cannabis companies hoping to build retail chain empires in the United States, the revolution is happening s-l-o-w-l-y. Continued federal prohibition and complicated state and local regulatory schemes present considerable obstacles for setting up one store, much less operating a hundred dispensaries across several states or a geographic region.

“I think the uncertainty makes life more difficult, whether it be banking or retail, real estate, and finding investors,” said CURE Chief Operations Officer Ryan Smith. “The analogy I use is cannabis is a normal business, just like any other business, except everything’s got a twist associated with it. Banking’s more difficult. The regulatory environment is significantly more difficult than any other business I had been in previous to being in cannabis.

CURE operates one medical-and-retail location in Denver and three dispensaries in Pennsylvania, where licensing is limited to medical marijuana sales. All four shops focus on vape supplies, oil capsules, concentrates, tinctures, and topicals, as well as specialized patient care, services, and education. In Colorado, where recreational use is legal, CURE also offers top-shelf flower in proprietary and curated strains.

“I think the business itself, the inherent complexity in the business, would go down,” he speculated. “The number of players, I think, would go up, and the availability of capital and interest from folks who have decided to stay on the sidelines in the U.S.—whether that be the alcohol industry, the tobacco industry, the pharma industry, or real estate—just other companies that might be interested in the space. They’ll be likely to start to enter the space, whether that is through applications or acquisitions.

“My guess is most of those companies would do it through acquisitions, because they want to be able to capture a certain percentage of the market share quickly. The only way to do that, especially in limited licensing markets, is to acquire existing operators,” he added.

Many market experts and pundits also expect the federal regulatory scheme for cannabis to resemble beverage alcohol’s when cannabis is removed from the Controlled Substances Act’s Schedule I. However, the added complexity of operating vertical businesses creates a multi-layered labyrinth of standards and requirements from which only the most strategically positioned and well-funded are likely to emerge as cannabis retailing giants.

“It’s as if Coors owned the fields, grew the wheat and barley and hops, owned the breweries, owned the transportation to the processors, to their third-party, to their bottling company, and then also owned the liquor stores,” Smith explained. “That would be the equivalent, right? So that’s the nature of this business, right? For example, in some places, we own that whole chain, and lots of other companies do. It’s not like we’re anything special… But there are very few, if any, other industries where you’re really controlling the entire vertical supply chain.”

Despite considerable obstacles imposed by operating in a quasi-legal market, the current retail chain landscape is being populated state-by-state and one store at a time. Some cannabis corporations are accumulating licenses in multiple categories and states in pursuit of wide expansion. Other chain retailers choose to target regionally, offering proprietary and third-party vendor products at multiple retail locations serving major cities or metropolitan areas. 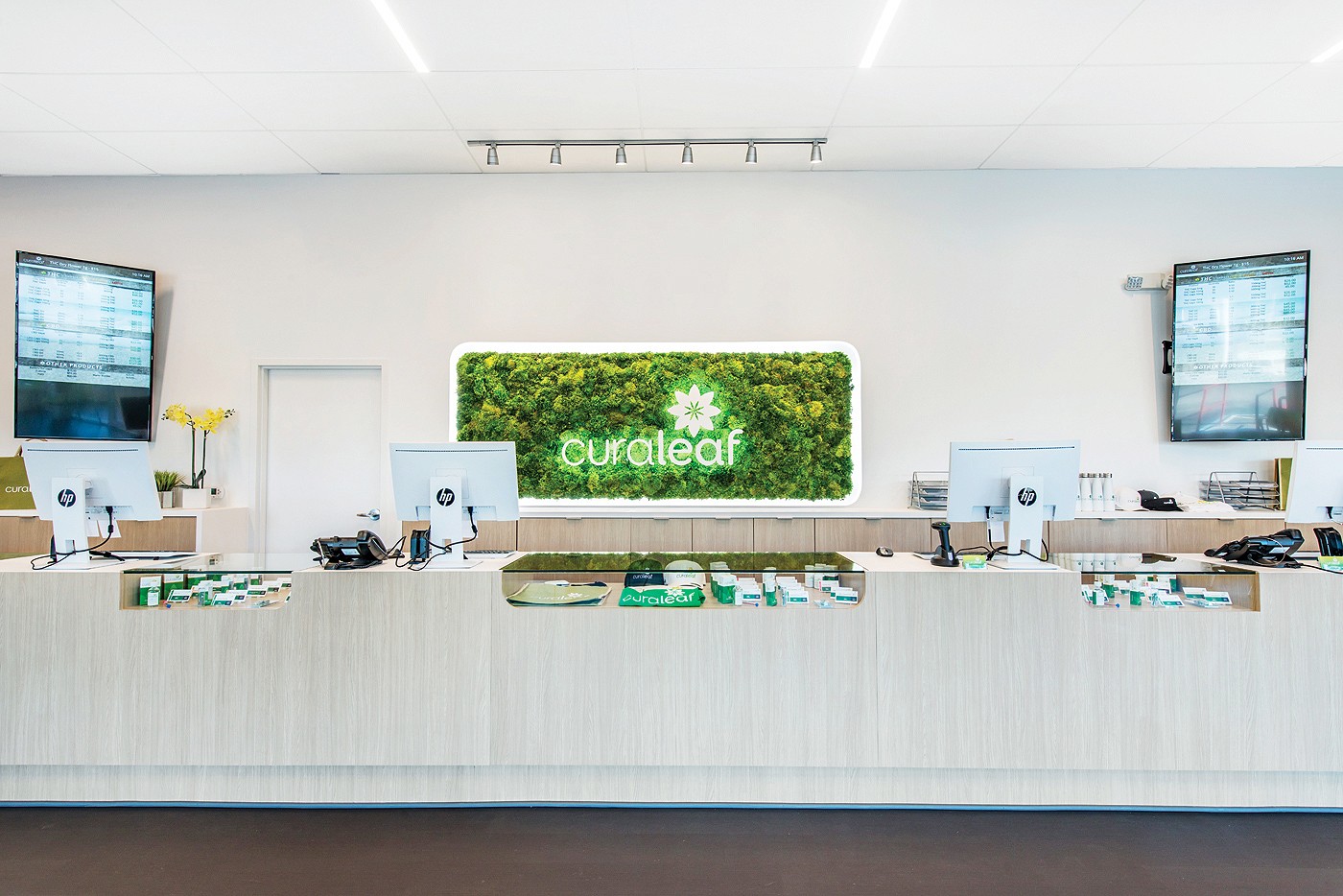 According to the corporate website, Curaleaf is focused “on highly populated, limited-license states.”

Curaleaf’s forty-two dispensary locations integrate vertically with the rest of the company’s holdings, which include twelve cultivation sites and ten processing facilities in twelve legal states. Curaleaf Senior Vice-President of Retail Operations Chris Melillo said the best-selling product categories across all stores are dried flower and cannabis oil. With more than 100,000 registered patients, Curaleaf serves a diverse cross-section of American consumers that, according to Melillo, includes “minors suffering from epilepsy, veterans suffering from PTSD, and grandmothers with chronic pain.”

“Compliance is the cornerstone of our business,” he said, responding diplomatically about the complicated regulatory challenges of operating in several states. “It protects us and our patients. We have compliance experts in our senior leadership team and compliance experts in every state. It is a critical part of the Curaleaf business.”

Melillo noted Curaleaf is optimistic federal legislation may ease the process of cannabis commerce. “There are legislative actions that would help the medical cannabis industry. We believe the STATES Act will play a role and are excited about where the industry is going.”

Introduced last June by Senators Elizabeth Warren (D-Mass.) and Corey Gardner (R-Colo.), The Strengthening the Tenth Amendment Through Entrusting States (STATES) Act “ensures that each state has the right to determine for itself the best approach to marijuana within its borders.” The bill extends the same protections to Washington D.C, U.S. territories, and federally recognized tribes. Having received broad bipartisan support in both houses of Congress and from governors in a dozen states, the bill awaits a vote.

Still, while legislative wheels turn slowly and limit market expansion for U.S.-based cannabis brands, chains, and franchise retailers, Curaleaf continues to grow its footprint. Despite being one of the largest U.S. cannabis retailers, Melillo said the company has no plans to expand into the newly legal Canadian market, unlike some other American retailers and manufacturers.

“Our goal is to increase the positive experience for our patients, as well as create a consistent environment that can appeal to medical patients and adult-use customers,” he said. “I believe we are well-positioned to become the premier cannabis dispensary chain in the U.S. We will continue to refine our patient journey and provide a consistent overall retail experience in each state [in which] we operate.”

Regional markets
Neither Curaleaf nor CURE operates in California, though Curaleaf’s licenses are in process and will lead to a storefront debut on the West Coast. The Golden State has been green for generations, starting with a well-established black market which was followed by a sprawling, largely under-regulated network of collectives and co-ops once medical marijuana was legalized statewide in 1996.

“California is a very different market, really, from any other market in the country—not just because it’s such a big state and it’s got so many people, but also because the order in which things happened is very, very important,” CURE’s Smith said. “Really, what happened in California is, and this is my opinion, the ballot initiative passed in  ’96… There were these co-ops that were founded, and there was a huge black market in California for the last forty or fifty years, so you’ve got that.

“Then, you’ve got this sort of quasi-legalization that was in place for twenty-plus years,” he continued. “Then adult-use passed, and again you have this patchwork of regulations that really hasn’t been put into effect. You still have an incredibly robust black market and an incredibly robust gray market, and so what you’re really trying to do is say, ‘Oh, you guys have been operating this way for ten, twenty, thirty, even fifty years. We’re gonna tell you that you can’t do that stuff anymore,’ and now you need to follow this set of written regulations,” he summed up, in an accurate layman’s description of California’s unique legal cannabis market. 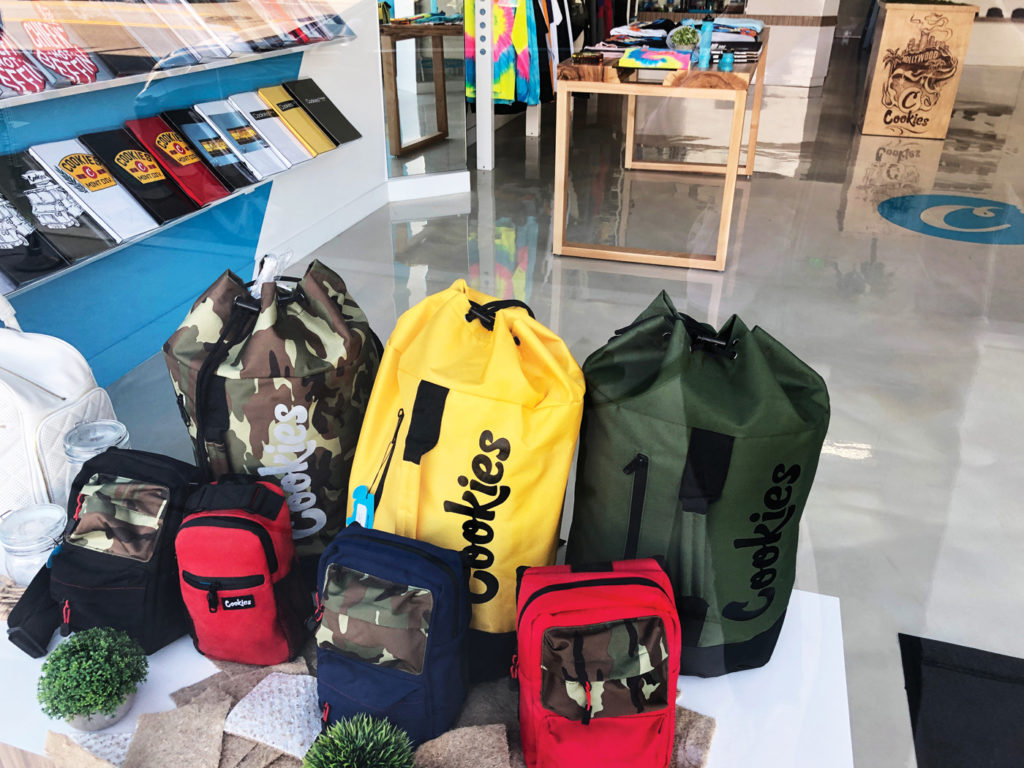 California dispensary chain Cookies, founded in San Francisco by rapper and cannabis entrepreneur Berner, has opened two locations in the Los Angeles area since January 2018. The first, a 25,000-square-foot facility in the city of Maywood in the southeastern part of Los Angeles County, includes a retail showroom and the brand’s indoor farm.

The dispensary’s glowing white exterior blocks the view of people passing on the sidewalk outside, but its friendly blue neon lighting seems inviting in a mysterious way. The exclusive vibe fits right in with the glamorous stretch of shops. Next door, a Cookies merch shop offers branded street wear and on-trend accessories. Nothing is overtly marijuana-themed; instead, it looks more like hipster brand Supreme, with cool logos and a global, hi-tech feel.

Regardless the clever marketing and name recognition attached to the owner, management realizes building the brand won’t be easy in the southern part of the state. Media reports estimate there may be more than 1,700 illegal dispensaries in Los Angeles County and only 169 licensed retailers.

“Due to ongoing changes in the cannabis industry when it comes to compliance, the government has made it difficult to establish locations and to adjust to the gray area of cannabis regulations. The process requires a great deal of tedious paperwork,” said Vartan, manager of Cookies Melrose. “From batch numbers to harvest dates, all this new information is becoming public for the consumer, and it is of utmost importance that Cookies California stays compliant and to adjust as quickly as possible.

“It would be much appreciated if the government could change their attitude about cannabis in general,” he continued, voicing the frustration of many California licensed retailers. “Let’s start by lowering the taxes. This includes the taxes we pay as a business in this industry, as well as making it easier for the consumers to afford the products offered. Cannabis taxes are hefty and add up in the long run.”

Of course, black marketers and gray market bad actors don’t comply with regulations, pay fees or taxes, or worry too much about tight profit margins. Legal retailers like Cookies are betting, if and when the California market normalizes, savvy consumers, connoisseurs, and cannabis tourists will seek retailers they can trust to have the best product. Cookies already is building that reputation, in part by offering more than 200 proprietary flower strains.

“Our goal at Cookies California is to deliver the best genetics of flower to as many people as possible,” Vartan said. “Our clientele travels from all corners of the world just for our brand. As the year progresses, we plan to extend our reach in other major cities within California. In addition, we are definitely interested in making a presence in the rest of the nation as other states slowly become recreationalized.”

Bricks and mortar
Patience definitely is a requirement for retailers navigating the mind-boggling labyrinth of operating procedures, standards, and requirements, while working hard to establish a brand that consumers recognize and investors find viable.

But it may be that some regulatory sticking points actually could work to benefit chain stores. Cannabis, currently the most widely used “illegal drug” in the world, is hugely popular with consumers. Regulatory concerns about online sales, delivery services, and the potential for misuse will ensure the need for brick-and-mortar locations for some time to come.

“I think [physical shops will] be critical, and I think it will largely end up being one of the most important parts of the business,” said CURE’s Smith. “At the end of the day, [there will be] a limited number of retail outlets that states will allow, just like liquor stores. I think because of that, retail will end up being critical. I don’t think either states or the federal government will allow very much of this to be done online because of the opportunity for abuse with kids and keeping [cannabis] out of the hands of people that shouldn’t have it. I think delivery is going to be limited, strictly.”

Despite the complexities of chasing the dream, in many ways now is a great time to be a cannabis retailer—a rare opportunity to be present at the birth of an industry and part of the next historic consumer commodity market with potential to change the world. Companies that want to play and stay in the space know fortune and the future favor the bold.