“It’s exciting time and really fantastic. We’re thankful for the amount of attention we’ve received,” Knox Medical co-founder José J. Hidalgo told mgRetailer. He explained the Gainesville and Orlando dispensaries are a new experience for local patients, as the first dispensaries to open in either city. 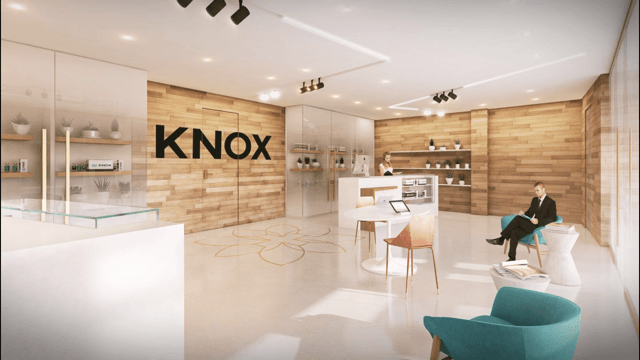 “[Gainesville] has been very well-received,” Hidalgo said. “Just having the doors open is a novelty for patients. We designed Knox Medical to be an inviting facility for patients, and also to bring a state-of-the-art healthcare environment with end-to-end customer service.”

“We’ve had a lot of visitors asking questions and patients that need information,” he added, noting that Knox Medical also acts as an educational resource for information on cannabis medication. “We’re educating them about pharmaceutical grade methods for new ways to medicate. Everything we’ve done has been developed to meet medical healthcare standards.”

Flower sales in Florida are prohibited and cannabis medications can only be produced from extracted oils. Hidalgo said that Knox Medical’s processes and products are produced using proprietary technology, developed by their team to pharmaceutical grade levels. Knox Medical will offer “non-euphoric” medications, high in therapeutic cannabinoid CBD, but low in psychoactive chemical THC.

“We’re very proud,” Hidalgo said, “to be able to provide medication that is the highest quality, created from the purest oil possible, in the country–maybe in the whole world.

“We can’t claim to be ‘organic,’ of course, because the FDA doesn’t allow that designation, but we use organic fertilizers and state-of-the-art technology in our 70,000 square foot growing facility,” he explained.

In Florida, whole plant material used for cannabis medications must be produced by one of seven state-licensed nurseries that have partnered with various cannabis consulting and investment firms. Knox Medical is an expansion of Knox Nurseries, a plant grower and supplier, located in Winter Gardens since 1962.

Cannabis consulting firm Cansortium Holdings, LLC, is partnered with Knox to achieve the expansion. Knox Medical currently also has growing facilities in Puerto Rico, and is one of three companies licensed to operate in Texas, where they will soon begin establishing facilities.

Hidalgo also pointed out that Knox Medical offers patients bilingual services, targeting Spanish-speaking demographics in the Florida market. “In a country as diverse as the United States, it’s important to provide information to patients in the best way they can digest it,” he said.

Currently, doctors in Florida must see a patient for a minimum of ninety days before issuing a prescription to obtain medical cannabis. Conditions that have been approved for cannabis treatment in Florida include cancer, glaucoma, HIV/AIDS, epilepsy, PTSD, Crohn’s disease, Parkinson’s disease, ALS, multiple sclerosis, or ‘debilitating medical condition.’ Cannabis opponents have battled the addition of ‘debilitating medical conditions’ to the list, claiming the designation is too ambiguous.