The evolution of software-as-a-service (SaaS) technology for mainstream retail also is occurring in the cannabis industry, with one big difference. As an immature industry with its entire future before it, legal cannabis has the rare opportunity to incorporate SaaS products from the get-go. Doing so would help individual retailers succeed while at the same time assisting the industry to scale for the future by allowing retailers, cultivators, processors, manufacturers, and distributors to improve individual and collective efficiency (and profitability) via real-time communication and automated intelligence. Yes, AI likes weed, too.

Consumers are in on the tech action, too, of course. They are the Holy Grail, after all. There are apps for everything cannabis, most of them focused on helping the consumer identify what products they want and where they can find the goods…now. But apps and websites are just the tip of the tech iceberg available to today’s cannabis retailer, who is free to employ the same SaaS solutions every other large industry uses to great effect.

“All major markets now, even medical, are run off SaaS platforms,” said Gary L. S. Allen, Director of Operations for New Frontier Data. “The difference with the cannabis industry is that SaaS platforms will be instrumental to its growth, but faster.”

It’s precisely that sort of prognostication by a bona-fide technologist, not a cannabist, that has made the cannabis industry so attractive to tech developers who want to bring order to chaos via an astonishing number of point-of-sale systems. According to Allen, New Frontier has identified more than eighty POS solutions targeting the cannabis industry, though only half are on the market. But even forty sounds like too many options.

Not so, said Allen. “Like every emerging market, there needs to be a healthy amount of competition, and a healthy number of new upstarts in every quarter makes the inevitable consolidation possible and equitable to the marketplace itself.”

The relatively stately pace of state-be-state legalization efforts likely means the “inevitable consolidation” is a few years down the road, leaving a marketplace full of POS contenders vying for your business. Or the shakeout could happen much more quickly, the result of open-source architectures that ultimately reward only those complementary SaaS products that provide demonstrable value to the retailer. For Jeannette Ward, MJ Freeway’s vice president for global marketing and communications, no matter how the retailer wants to configure her POS system, she’ll assess its value by return-on-investment. 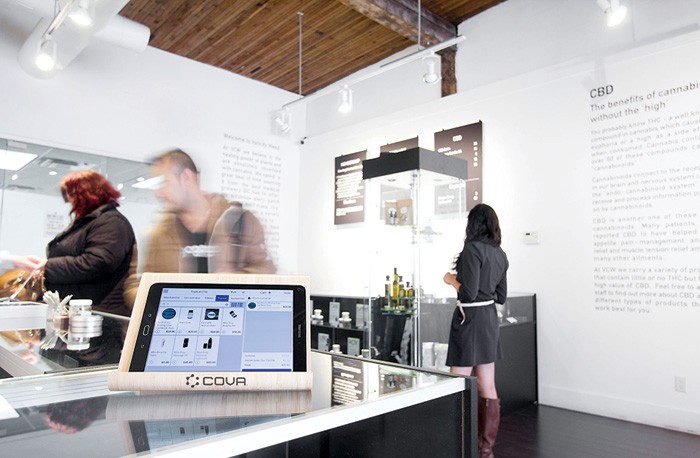 “The leading trend in POS is ROI,” said Ward. “Which solution is allowing you, as a business, to be more efficient and effective? The way we [at MJ Freeway] talk about that, the way we think people should be thinking about it and, frankly, the way our most sophisticated clients have been holding us accountable, is as ROI. We think the trend also is being able to calculate with your POS software what the return on that investment is. The average technology investment for a company should be about six percent of your revenue, and if you’re not doing that you’re really missing an opportunity to capitalize on that ROI.”

The consequences could be even more dire, Ward warned. “Margin and reducing your cost of overhead is going to be the name of the game for success in the cannabis industry,” she said. “Who can serve with the least amount of cost? Who can get the most margin dollars by driving down those costs? ROI is going to be your critical way of getting there, and POS—how you measure the ROI—is the first thing. How much time does this system save me in the checkout process versus that system? It could be forty-five seconds or a minute-and-a-half, but that calculation added up over all the customers you serve a day, the number of customers you serve a year, adds some serious dollars to your bottom line. You should be looking at that—at how long it takes to do patient checkout—and whether one system saves time over the others.”

Looked at that way, it’s no wonder new POS solutions continuously try to engage the retailer with promises of greater performance and reliability than what’s currently available. One such newcomer is Cova, a POS solution that shares its back-end infrastructure with a parent software company called iQmetrix, which has been building POS and ERP for wireless and general retail clients for more than nineteen years.

“In our ongoing conversations with owners, managers, and budtenders, we regularly hear complaints about software design and user experience, [along with] a lack of in-depth reporting and sophisticated marketing tools,” said Cova Chief Executive Officer Gary Cohen. “Cannabis retailers have to deal with peak time queues, staff turnover, shrinkage, finding new customers and keeping the ones they have. Dispensary operators also face challenges unique to the industry, like compliance and federal prohibitions. Shaky internal systems with POS leading the way are another headache. That’s why system reliability, performance, and software stability are the most important features to cannabis retailers and, quite frankly, it has been a major headache in this industry so far.”

Indeed, the budtenders we spoke with concurred. System reliability—or what they called “glitches” that occurred while they were serving customers—is their biggest peeve. Even if the transaction was interrupted by only a few seconds, the glitches created a lack of confidence in the stability of the software. According to Ward, however, the explanation is simple. “All SaaS software, any cloud-based software—which basically all the current POS software is except for BioTrackTHC—is going to have moments when you’re not happy, because you’re on the internet,” she said. “Just like when things get glitchy at home, you’re going to have some of those experiences.”

Understandably, Ward is sensitive to the subject of stability. In January and again in June, MJ Freeway suffered breaches of its network. The first was far more serious than the second, bringing the system down, throwing hundreds of clients offline, and even impacting Leaf Data Systems, the company’s government tracking system. The breach was costly to retailers and MJ Freeway’s reputation, and is still used by competitors as an example of what to avoid. As Ward noted recently, “We’ve made a lot of infrastructure upgrades since our problems in January.”

We use deep machine learning and artificial intelligence algorithms that not only give you your key performance indicators, but also allow you to see predictive analysis of what should be selling better next quarter versus what sold last quarter. —Gary Allen, New Frontier Data

The upgrades have paid off. The company recently scored seed-to-sale government contracts with Pennsylvania and Washington state. It’s the sort of growth that allows MJ Freeway to improve its other products. “We still have the cannabis industry’s largest store of data, so we have a data product that shows our retailers what’s selling in their market, for what prices, trending strains or edibles, what categories are adding the most value to retailers,” said Ward. “We have that data, but we also have a product for cultivators and processors, which gives us the ability to do things with inventory. Once I have information about what’s hot or trending, we have the ability in our system to communicate with cultivators and processors, to order more product, or put it on automatic reorder.”

The ability to integrate data from various sources is what makes SaaS solutions like MJ Freeway so valuable even as they are working through their glitches. Data integration also is a core component of Equio, a comprehensive business intelligence platform powered by New Frontier Data’s big-data engine. “We use deep machine learning and artificial intelligence algorithms that not only give you your key performance indicators, but also allow you to see predictive analysis of what should be selling better next quarter versus what sold last quarter,” said Allen. “That information would come from a variety of data sources, such as cultivators, new products that launch in the marketplace, as well as historical data.” 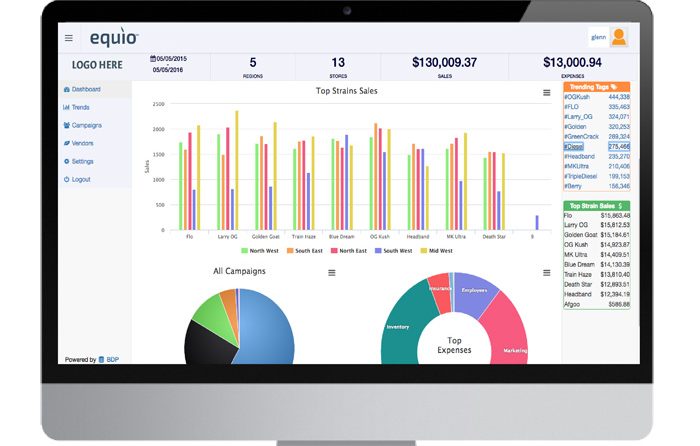 Equio includes a free POS product but, consistent with its open-source stance, retailers are free to use other POS software. “We are not the only free, cloud-based system out there,” said Allen, “but what differentiates us from most of our competitors is that ours is hardware-agnostic. Even if a retailer is not using our POS, they can hook their current software into our operator dashboard, so we’re collecting information from people using our POS and from many who are using MJ Freeway, BioTrack THC, or even the Metrc system. While we want our POS in the marketplace, we don’t care what POS our clients use. We’ll still give them the business intelligence.”

Everyone enters the tech market touting an advantage. For newcomer Cova, it’s “configuration, simplicity, and scalability, the three attributes that make our product unique,” said CEO Cohen. “Our dashboard and analytics can be customized based on what cannabis retail managers must know to make smarter decisions. When the internet or Wifi goes down, Cova software will continue to operate in an offline mode so that transactions continue and transaction time remains fast. Cova is also built to scale, so as you grow your cannabis empire, we can grow with you. With our multi-location feature, retailers can manage a network of dispensaries from one place, with visibility into their entire operation from inventory, sales, profit, and customers.”

It all speaks to the main concerns Cova hears from retailers. “I would say system reliability, performance, and software stability are imperative features,” Cohen said.

If there is one consistency among the software companies we spoke with about POS software specifically, and retail software in general, it is the shared belief that the ability and willingness of tech providers to partner and integrate with other solutions is essential for survival in the space.

“We will bolt on any widget or product that will make the retailer smarter and the customer-retailer relationship stronger,” said Allen of New Frontier, adding the company has a deep relationship with Baker (see Corner Office in this issue). “You have companies that are loyalty and affinity, like Baker or Lift in Canada, and then you have marketing firms that integrate with us, like EyeChronic.”

The story is the same with MJ Freeway. “Integration is so important for the cannabis business owner, so you can get the tools you need,” said Ward. “We’re not interested in telling people they have to use MJ Freeway tools. We encourage our retailers to look at customer-relations tools like Baker. In fact, CRM [customer relationship management] is on my shortlist of industry trends. If you’re not managing customer relationships with even the most basic texting or marketing campaigns, you are behind he eight ball.”

While the tech companies serving the cannabis retail space told us the sector has a long way to go before realizing its potential, a newfound willingness among retailers to use the available technologies bodes well for the future. “What has surprised, intrigued, and motivated me in the past ten months that I have been with New Frontier is the speed in which the market is truly maturing,” said Allen. “It’s churning, and there is a lot of noise and activity, but people really are looking at business intelligence and data before getting into the marketplace, or very quickly afterwards.

“I’m also struck by the speed with which the stigma about the legal cannabis market is changing not only public opinion, but corporate opinion,” he added. “I came from consulting for big corporations, and their opinion of this market was much different ten months ago than it is today.”