2019 was the year California cannabis brands began experimenting with retail concepts, and Los Angeles was ground zero. Sleek vape heavyweight Stiiizy made its suitably emphatic entry into retail in August.

The 6,500-square-foot flagship store on the industrial edge of downtown L.A.’s Arts District is one of three retail locations the brand opened in California last year. (The others are in Davis and the Mission District of San Francisco.) The DTLA store brings to life the brand’s increasingly well realized East and South L.A. streetwear aesthetic, colored with artistic and architectural nods to the recent past and distant future.

After fifteen years working in commercial and mixed-used developments for global architecture firms RMW Architecture & Interiors and NBBJ, Paoletti started her own boutique firm Gi Paoletti Design Lab, which specializes in bars, restaurants, and now, conceptual dispensaries. Some of her recent projects include the Bay Area’s Tipsy Pig, Bloodhound, and Barrique. Stiiizy was Paoletti’s first cannabis client, and she admits being surprised about the lightning evolution of design in the herb retail sector.

“I think what’s really great about cannabis retail,” she said, “is it went from these shady stores straight to high design. We’ve almost skipped that middle area. I think there’s something tremendously exciting about that.”

“High design” is apt beyond the trite pun. Stiiizy’s striking space is vast and cavernous, with an entirely matte-black ceiling that conveys the feeling of infinity looming above. Divided into four stark-white sales pods in which budtenders preside over more than fifty big-name brands—including Stiiizy’s new flower line Liiit, and edibles Biiit—the space also has a vape pen customization bar and a line of, frankly, very cool, limited-edition “Stay Stiiizy” clothing.

“One of the primary directives from the client, Paoletti explained, “was they wanted the entire space to be Instagrammable.”

Stiiizy has been one of the most successful and active brands on Instagram, boasting around 319,000 followers at the time of writing. In the past year, the brand has found its social steez, recognizing its sleek-on-fleek metallic vapes have become a fashion accessory for L.A.’s Supreme- and Golf-clad audience. The brand’s online presence no doubt has had a major lift from its legion of influential fans, which includes the likes of Migos, Miley Cyrus, Wiz Khalifa, Joe Rogan, and Post Malone.

“When you think about making an entire space Instagrammable, you’ve got to consider what’s going to inspire someone to want to take a picture and to share it with their friends. What’s going to create that ‘wow’ factor?” Paoletti said.

For her, the real question was “how do you take an empty warehouse with really high ceilings and turn it into something that blows people’s minds, over and over again, every time they come in?”

She focused on changeability, advising her client to frequently offer something new and visually compelling. Stiiizy chose to refresh the experience with rotating art and installations. Among the original works on display recently was a twenty-nine-foot installation by renowned L.A. street artist RETNA. Relic wildstyle pieces from L.A. street artists Mr. Cartoon and Kelly “Risk” Graval adorn the lobby walls.

To the brand’s founder, James Kim, art is a crucial part of the Los Angeles location. He explained he wanted the store to be “a reflection of the creativity in the Arts District.”

Paoletti baked the frequent interior refreshes into her design. “In the lobby where you check in, we did these Instagram stations,” she said. “There’s two of them there, and inside are removable panels, so [store management] could change the interior monthly, every six months, whatever they want to do.”

Stiiizy DTLA’s Instagrammable-ness starts the moment consumers see its “Cannabis for the Culture” motto emblazoned across the top of the building’s exterior, proudly looking northeast over U.S. Route 101 and the Deja Vu strip club. 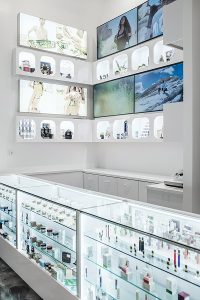 Once customers present their ID and check in, a set of sliding doors glides open, as though giving admittance to the Starship Enterprise. Customers walk through a black projection tunnel with recessed LED lights on the walls and ceiling. On the day I stopped by it was tricked out with camo projection mapping—no doubt a nod to Stiiizy’s limited-edition camo vape for Veteran’s Month. The space closes in on visitors, then opens up into a stark white cube capped with a black ceiling.

Paoletti admits her laser focus on designing a space that can exist in parallel online and in the real world was an interesting and novel challenge, and she said it is particularly innovative for once-clandestine dispensaries.

“This idea of making a space like this public in such a big way is new,” she said, adding research for the project took her to Denver to explore the OG recreational state’s retail landscape.

“I toured a bunch of different cannabis stores over a week period, and I would ask, ‘Can I take pictures?’ And they said, ‘No. Absolutely not.’ Then I had a couple who said, ‘You can take pictures, but no people can be in them.’ That’s what made me realize Stiiizy’s store was really at the vanguard of something new.”

Her recent experience with city building departments in Los Angeles and San Francisco suggests a sea change in the desire for transparency. As Paoletti tells it, regulators want to move away from the shady, dank dispensaries that defined the pre-recreational era into something considerably more visible. 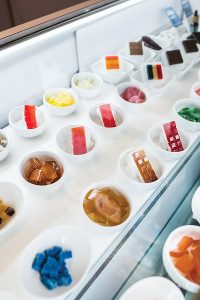 “At first, they wanted no transparency,” she said. “They didn’t want people to see inside. They were treating dispensaries like X-rated movie theaters. It was very much shunned by the cities. And now, the cities are saying, ‘No, actually, we want you to have transparent glass. We want people to see what’s going on inside. We want you to look more like a regular retail store.’”

It’s clear that as an architect working in cannabis retail, Paoletti feels a sense of personal obligation and responsibility for the de-stigmatization of weed. “There’s still an intimidation around buying cannabis,” she said. “A person might be curious, but if they walk in and feel intimidated, they might turn around and walk out. Then, you’ve just lost someone that could have been a lifetime customer.

“I think the designer’s role is to make this space inviting, beautiful, and also easy to walk through,” she added. “We talk a lot about the aesthetic, but it’s really important to consider the functionality of the space so people feel comfortable enough to start asking questions and learning this isn’t scary. It’s just a plant.”