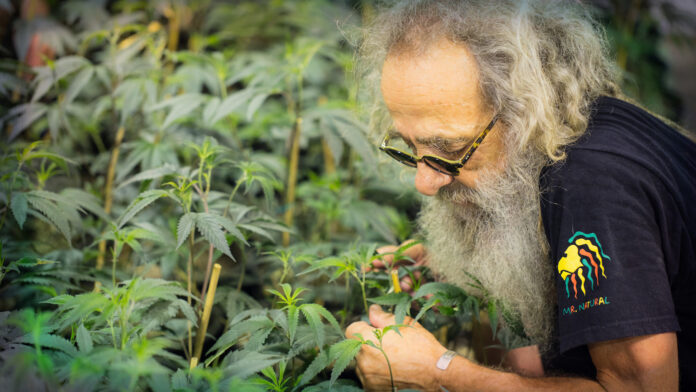 The Mr. Natural brand was developed by U.S. Vietnam Veteran Bob “Natural” Luciano beginning more than 50 years ago. Like many of his compatriots, Luciano discovered the therapeutic benefits of cannabis during his service. But when he returned home, he and his fellow veterans discovered that access to cannabis – the only viable treatment they had found for their ailments – was no longer available. Since its founding, Mr. Natural has gained a large following of veterans who rely on Mr. Natural products to help manage symptoms from PTSD and other ailments.

That experience inspired Luciano to pursue his lifelong mission to educate people on the benefits of medicinal cannabis. A strong advocate for the medical use of cannabis for veterans, Luciano cultivates strains specifically for treating PTSD, chronic illness and pain to enable other veterans to gain relief. He has actively worked with the U.S. Veterans Administration since 1972 to educate others on cannabis and its use for treating PTSD.

“Bob has dedicated his life to being an advocate for the medical use of cannabis for veterans, and we are honored to help further his efforts by bringing Mr. Natural Full Spectrum Hash RSO to patients in Nevada,” said Terry Booth, CEO of AUDACIOUS.

Named after the Canadian cancer patient Rick Simpson who developed it, RSO or “Rick Simpson Oil,” is a full extract, high-potency cannabis oil meant to be ingested orally or applied topically.  Mr. Natural Full Spectrum Hash RSO is a mix of cannabinoid-rich cultivars and tests high for several major and minor cannabinoids, as well as numerous terpenes. The company uses a proprietary extraction method that provides a product that is closer to full spectrum, the way nature intended.

“Mr. Natural was founded on the universal principles of positivity and healing,” said Mr. Natural. “Our Full Spectrum Hash RSO is made with cannabis that is grown in premium soil, rich in terpenes and cannabinoids, and cured to perfection. We have dedicated our lives to cultivation, which lets us offer a final product that is exceptional.”

Founded by industry pioneer and military veteran Bob “Mr. Natural” Luciano, the Mr. Natural brand of cannabis products are handcrafted, the way nature intended. Informed by his experience as a veteran, he cultivates medical grade cannabis and advocates for the healing power of nature’s medicine and affordable access to those who need it most. Learn more about Mr. Natural here.

AUDACIOUS is a next-generation MSO growing the cannabis industry of tomorrow from the ground up, led by industry pioneer Terry Booth and an accomplished management team with proven industry track records. With operations that range from providing industry-leading sustainable cultivation design and optimization to retail storefronts, growing flower in-house, and manufacturing award-winning brands, AUDACIOUS has products and solutions for everyone. Quickly expanding through innovative partnerships and collaborations, AUDACIOUS is forging the inclusive cannabis community of tomorrow, today. Learn more about AUDACIOUS here.