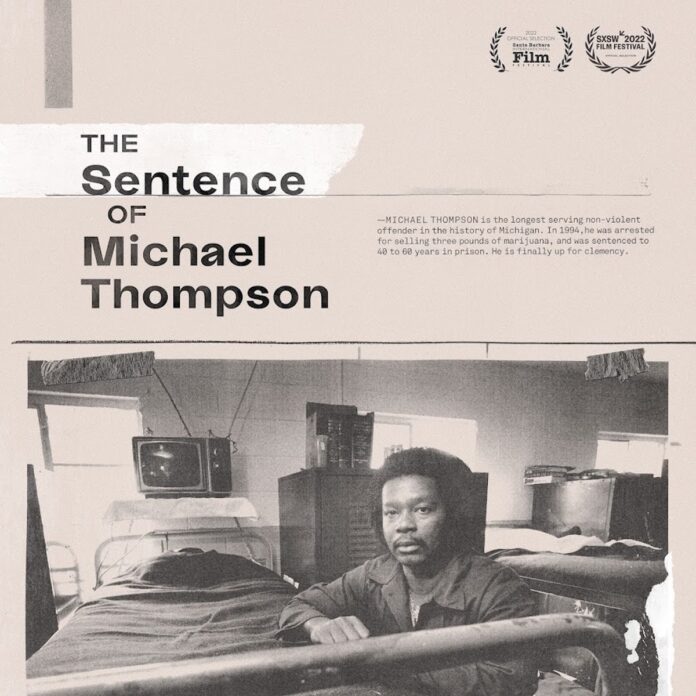 NEW YORK — The Sentence of Michael Thompson will premiere on MSNBC this Sunday, October 30th at 10pm ET and will be available on XTR’s Streaming Service DOCUMENTARY+ the following day, November 1st. The documentary short tells the powerful story of Last Prisoner Project constituent Michael Thompson, the longest serving non-violent cannabis offender in Michigan history who spent 25 years in prison and was released last year.

In 1994, Michael Thompson was sentenced to 42-60 years for selling three pounds of cannabis to his friend turned police informant, and he remained there as Michigan legalized the recreational use of marijuana. The short examines both the harmful legacy of the War on Drugs and the path forward as national legalization becomes a reality. In early 2021, Thompson was granted clemency by Michigan Gov. Gretchen Whitmer after he had served a quarter of a century behind bars. While he was imprisoned, he lost both of his parents and his only son. His release allowed him to reunite with his two daughters, one of whom was only three when Thompson went to prison.

The Sentence of Michael Thompson is equal parts a criticism of the criminal justice system in the United States and a tribute to Thompson and his family’s faith and optimism in the face of injustice. In depth interviews with Thompson’s family and his legal team demonstrate the damage done to the families of the incarcerated and the hypocrisy of a system that keeps nonviolent offenders locked up as others profit from cannabis legalization.

ABOUT THE LAST PRISONER PROJECT:

The Last Prisoner Project (LPP) is a nonprofit organization dedicated to cannabis-related criminal justice reform. As the United States moves away from the criminalization of cannabis, giving rise to a major new industry, there remains the fundamental injustice inflicted upon those who have suffered under America’s unjust policy of cannabis prohibition. Through intervention, advocacy, and awareness campaigns, the Last Prisoner Project works to redress the past and continuing harms of these inhumane and ineffective laws and policies. Visit www.lastprisonerproject.org or text FREEDOM to 24365 to donate and learn more.

The Sentence of Michael Thompson is presented by MSNBC Films and XTR along with a Synonymous Pictures production, directed by Kyle Thrash and Haley Elizabeth Anderson, produced by Kyle Thrash and W. Ian Ross. The film is Executive Produced for MSNBC Films by MSNBC President Rashida Jones and MSNBC Films Vice President of Longform Acquisitions Amanda Spain alongside Bryn Mooser, Kathryn Everett, Justin Lacob, Lydia Kives for XTR, and William Crause. The short film premiered at several festivals to critical and audience acclaim, winning the Audience Awards at SXSW and the Chicago Critics Film Festival, the Jury Award at the Riverrun International Film Festival, and the Jury and Audience Award at the Palm Springs International Shortfest.