We know more about the movement of celestial bodies than about the soil underfoot.
– Leonardo da Vinci, circa 1500s

While conventional agriculture and chemical fertilizers have been with us for only the last 60 years or so, healthy soil has naturally evolved over the last three billion years, culminating in a system that cannot simply be bought off the shelf, but must be nurtured.

Natural soil has a complex ecosystem. Bacteria and fungi microbes work symbiotically with plant roots. Microbes create structures in the soil that the roots can grow into and also protect the roots from pathogens. They also create acids that solubilize rock minerals, making them available for plant use. Plant roots in turn provide sugars and carbohydrates to the microbes. Growing indoors can lead growers to finding themselves working with a very sterile environment.

For growers starting in sterile environments, they need to use nutrients and other additives to create fertile conditions. This leads growers to ask two important questions.  Which additives should I use in my soil? And which soils are best at retaining and helping plants use those additives?

Organic soils, such as biochar, tend to have a high cation exchange capacity (CEC).  CEC is sometimes used as a proxy for “soil fertility, nutrient retention capacity, and the capacity to protect groundwater from cation contamination,” according to an article published by Ron Goldy of the Michigan State University Extension. “Soil particles are negatively charged and attract positively charged molecules. These molecules can be nutrients, water, herbicides and other soil amendments.”

That means, the higher the CEC, the more water and nutrients will bind to the soil and be accessible and able to be “exchanged” from the soil to plant roots. The high CEC also means that pH decreases more slowly, remaining resistant to acidification over time.

Biochar is an example of a high CEC soil. Biochar is an organic soil medium created in a process known as pyrolysis. At the Miller Soils company, tree debris is burned in a closed system, and the hot gas is captured and used to help heat the oven.  What’s left is biochar.  The founder of Miller Soils, Louis Miller, explains, “We use biochar because it’s very absorbent, it holds water, it holds nutrients, it provides a home for fungal and bacterial growth.” Their flagship product, Red’s Premium Biochar Blend, uses biochar, along with a number of amendments, including coco, another high CEC, organic medium.

Soil density is another important consideration. Earthworms and microbes help create pathways for roots to grow into, but if soil is too dense, water will sit at the top layer of the soil. Tilling is one cause of overly dense soil. It can cause roots to grow sideways, instead of downwards, leading to weaker roots. When dense soil is watered, air is flooded out, drowning beneficial microbes.

Fertilizers can also kill microbes if they contain high salt content. Salty fertilizer leaches water out of the soil and microbes. The main consideration with fertilizer is to create an environment with as many different nutrients as possible. This creates richer plants and wider flavor and smell profiles. An added benefit is making plants more resistant to disease.

“As you increase bacteria biodiversity, you crowd out the pathogens.  This is nature’s version of a ‘pesticide’,” says Jerome Chambless, the chief scientist for OG Tea, a dry inoculum of microbes. “All of the potting soil media you see is man-made and is sterile. It’s the same thing that happens in hospitals; when you have a sterile environment, a pioneer shows up. And that’s always going to be a pathogen. So what you’re doing by inoculating with the good bacteria, you’re hoping that there won’t be any room for the pathogens.” The concept isn’t dissimilar to probiotics or preventative medicine for your garden.

Jerome explains that there are five “tribes” of microbes. Some can be found in traditional compost, others cannot.  Along with pathogens, you have “decomposing, which is what you’re going to find in compost and in worm castings. But you’re not going to find the aerobic bacteria, the mycorrhizal fungi or the trichoderma fungi because the heat process of composting kills them all.”

Many growers add fossilized bat guano to their potting mix because it has a high NPK ratio, the percentage of nitrogen, phosphorous, and potassium in the mix. Fossilized guano comes from caves, and as it has been sitting in a cave for many years, any pathogens have long since died.  But fossilized bat guano is becoming harder to get. The other type of guano, unfossilized or fresh guano, can contain pathogens if it is not pasteurized.

“Pasteurization is essentially a process of filtering it and heating it to remove pathogens and anything that isn’t poop,” Leigh Ann Loughner explains. She works with Amazon Organics Limited. They provide pasteurized chicken fertilizer in a powder form. Chicken fertilizer, according to Leigh Ann, has the highest NPK of animal manures.

While CEC, NPK, and microbial content are good indicators for creating fertility in sterile environments, the ultimate way to prevent disease in plants is to create healthy ecosystems that regenerate naturally, rather than replacing soil every cycle. Conventional systems are still a ways off from competing with the system set up by Mother Nature, but the right soil and additives can help growers get closer.

Among the reasons many growers prefer to using sterile soil and pots each cycle is to prevent disease and excess salts from passing from one cycle to the next. For outdoor crops, mobile greenhouses allow the grower to rotate crops, and the soil to rest.

To minimize the environmental impact of replacing soil, growers can look for recycling opportunities in their area, such as Industrial Hemp Recycling in Denver, or they can revitalize their own soil. The Environmental Protection Agency recommends using amendments to raise or lower pH to appropriate levels, adding organic matter to the soil to redevelop microbiology, adding phosphates or sorbents to reduce toxicity, and tilling dense soil to make it navigable for roots. 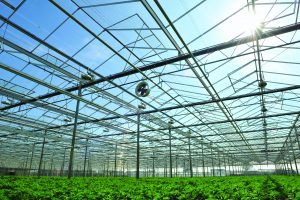 Light deprivation greenhouses, such as those provided by Forever Flowering and Nexus, can help growers control light and darkness conditions while growing in the ground.

Tim Beall, the COO of GrowCo, explains that in his prior experience growing tomatoes, “We knew in a taste test that [hydroponic tomatoes] could never beat the taste of tomatoes grown in soil.” GrowCo designed and built the largest cannabis greenhouse facility in Colorado at 90,000 square feet, “We found that we can use organic fertilizers and grow a plant as fast as synthetic fertilizers with the right balance of soil microbes.  Some teas work, but some shock the plant and slow down growth.  We want those roots to interact with the living soil to create lots of flavonoids, which create rich scents and tastes.”

Light affects plants in a similar way: the richer or fuller the spectrum of light, the wider the range of traits the plant will be able to express. Further research should be done to study the impacts of using full light and rich soil on creating healthy medicine.