In a hyper-competitive market, community and quality have been a winning combo for Oregon dispensary Jayne.

On the northwest edge of the Eliot neighborhood in downtown Portland, Oregon, a stone’s throw from iconic spots like the Moda Center and Wonder Ballroom, sits Jayne, one of the city’s most popular dispensaries. With its whimsical aesthetics and upscale, urban clientele, the former automotive repair garage appears right at home in the trendy, pine-tree-ringed neighborhood full of hot restaurants, pricey spas, and glistening boutiques.

That wasn’t always the case. Beginning in early-2014, from the day the shop was conceived by avid agronomist Robb Arnold, Jayne was plagued with construction stoppages and political red tape until finally opening in November 2015. 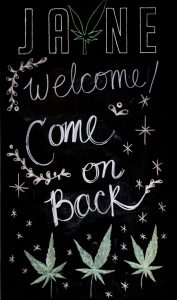 Right away, convoluted testing laws and regulations placed a burden on the dispensary’s ability to grow. Arnold needed an expert to manage the shop. He found the perfect fit in Briana Burke, whose experience at testing facility Green Leaf Lab had made her a respected cannabis professional with extensive contacts among growers, advocates, and industry executives.

Although Burke, 27, was quick to bring the shop into compliance with testing requirements, the state’s banking issues haven’t been as easy to navigate. Currently, Jayne uses a bank that charges a monthly service fee of $250 and an additional 0.5 percent of all deposits. “They cap the bank account fees at $1,000 per month,” Burke said. That’s comforting, to a point, but she still finds it unfair that cannabis businesses are gouged in interactions with mainstream entities.

Another challenge has been ever-increasing competition. More than 150 dispensaries in and around the city sell the same flower, edibles, and concentrates. Even though Portland Monthly and High Times ranked Jayne among Portland’s top ten shops, Burke constantly seeks new ways to stand out. She began by making Jayne a vital part of the community. 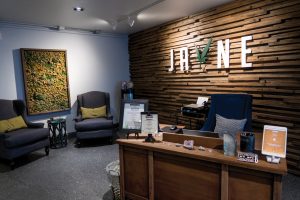 “On the most basic level, we have great products and a comfortable atmosphere, and we strive to provide great customer service,” said Aaron Heisler, Jayne’s marketing coordinator. “But the best thing we have going for us is our community… Jayne would not be what it is today without our amazing customers and community.” 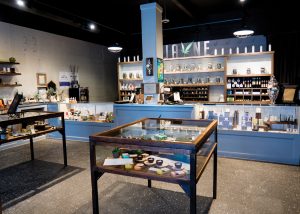 In fact, Heisler just sealed a community-type deal with Jayne’s neighbor, the Jupiter Hotel, a funky, midcentury establishment that recently underwent a modern, swanky, cannabis-friendly makeover. All Jupiter guests receive a 10-percent discount at Jayne. Heisler noted the hotel’s business model “fits very well with ours because they are so cannabis-positive, to the limit to which they can be.”

Burke also insisted the shop become the first female-friendly cannabis businesses in the city. Although Jayne serves all genders, Burke made sure to hire lots of women and curate a menu that highlights female producers. She also hung local female artists’  work on the elegant, wood-paneled walls. 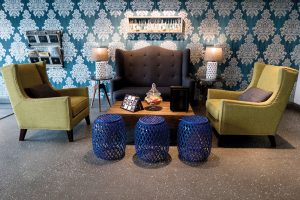 Jayne serves almost 150 customers a day. Flower is the shop’s top seller, accounting for about 40 percent of sales. Most of the top-shelf bud is from Southern Oregon’s Pilot Farm, where the elevation of about 4,000 feet, sun-dappled days, and breezy, cool evenings create clean, sustainable, and potent cannabis. From day one, strains like Mountain Girl Blue (a heady sativa),  Jack Skellington (a spicy indica), and Mendocino Purple (a Zen hybrid) have been customer favorites. Lately, cartridges, vape pens, and pre-rolls have seen an uptick in sales, Arnold said.

Oregon has been a volatile market for vendors since January 2017, when final Oregon Liquor Control Commission licensing and full retail sales went into effect. Jayne’s best-selling brands have been those that seamlessly made the transition and maintained a consistent presence on the shelf—brands such as Karma Originals pre-rolls, O.penVAPE, and grön edibles.

These days, Burke spends the bulk of her time meeting with vendors, reviewing inventory, placing orders, planning monthly events, and analyzing sales trends. The process appears to be working: Jayne’s business grew 30 percent from 2016 to 2017. In its first full year of operation, the shop nearly doubled monthly sales. “The outlook is good,” said Burke. “As an emerging industry, making the transition from black market to an open market was a hard road, but we have worked hard to differentiate ourselves from our competitors.” 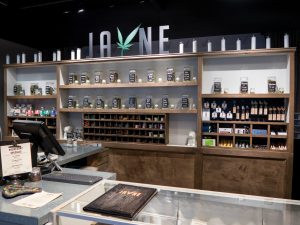