Housed in a former strip club in Glendale, Colorado, SmokinGun Apothecary is part anti-prohibition museum, part recreational dispensary, and all beacon of education “lighting the way for liberty.”

SmokinGun Apothecary is more than an average dispensary. It’s also an anti-prohibition museum open from 8 a.m. until midnight daily. Housed on a site formerly occupied by the infamous Denver strip club Shotgun Willie’s, a clandestine doorway opens a trip back in time to the Wild West, complete with authentic jail, teller booth from the Bank of Hibernia circa 1870, flower displays in vintage whiskey barrels, and a massive mural depicting an eagle holding cannabis in one claw and arrows in the other.

The idea hit in 2014, when owner Debbie Dunafon and her family traveled across Colorado promoting Amendment 64 and her husband’s gubernatorial campaign. (Her husband, Mike Dunafon, holds no ownership in SmokinGun.) What they found was staggering: a total lack of education about prohibition and the War on Drugs. 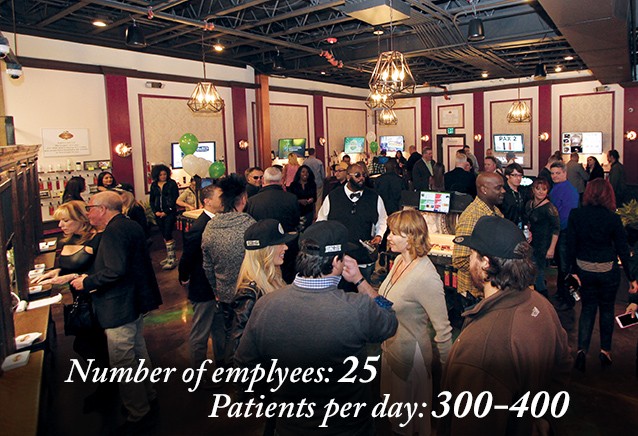 “This really inspired the family to develop the anti-prohibition theme for the dispensary and museum,” said Marketing Manager Nick Moscia.

Ever since, the company has maintained a simple mission: educate, raise awareness, and empower each consumer with the knowledge they need to take a stand against the War on Drugs.

“It’s the family’s dream to get every person released from prison who committed petty crimes related to marijuana,” said Moscia.

“The overall aesthetic promotes the end of prohibition worldwide,” noted Moscia. “We want to visually inspire consumers in the hopes they will develop a voice and speak out against the oppressive drug laws. There’s a copy of the Declaration of Independence displayed on one wall, beautifully painted murals on the walls, and videos of real-time drug war updates from key media sources.”

Hot sellers one month may not do so well the next. We see this fluctuation
mostly with edibles and beverages. More and more customers seem willing
to give concentrates a go these days, while our pre-roll and vape pen sales
jump on weekend nights between 7 p.m. and midnight. The party crowd prefers
to consume discretely while bar hopping.
—Nick Moscia, marketing director

Gabe Archuleta designed the building core and shell, while the interior design represents a collaboration between the Dunafon family and artist Daniel Chavez.

Must be wholesome, friendly, badged by the state of Colorado, and 21 or older. “Many of our employees have past experience in the industry, but this is not mandatory,” noted Moscia. “Anyone can be trained to sell marijuana, but we seek out candidates who are passionate about our story, understand the privilege and responsibility of selling marijuana, and are passionate about fighting the war on drugs.”

“We track and monitor inventory in real-time using the BioTrack point-of-sale inventory management system. We also take physical inventories once a month to ensure counts are spot on,” said Moscia.

“Hot sellers one month may not do so well the next,” Moscia said. “We see this fluctuation mostly with edibles and beverages. More and more customers seem willing to give concentrates a try these days, while our pre-roll and vape pen sales jump on weekend nights between 7pm and midnight. The party crowd prefers to consume discretely while bar hopping.”