In 2005, Money magazine named Bainbridge Island the second-best place to live in the United States, but with addition of the ultra-charming Paper & Leaf cannabis boutique, co-founded by Blues Traveler drummer Brendan Hill, it now may be number one.

As a founding member of the band Blues Traveler, drummer Brendan Hill has always been somewhat of a dreamer. In 2013, he began daydreaming about the perfect retail cannabis boutique as Washington State’s i502 initiative was about to be passed. The bill had a whopping 72-percent support in his hometown, Bainbridge Island. Hill began attending city council meetings and even joined the Chamber of Commerce.

“I think the success of Paper & Leaf has proven that once you show folks the positive aspects of cannabis and highlight the education part, the community will embrace you,” he said.

Hill and co-founder Steven Kessler deemed Bainbridge Island the perfect place to try a different kind of cannabis retail business model. They elected to create an art gallery atmosphere, displaying the different flower strains in well-lit picture boxes so customers could easily walk around the store, clearly see the product, and choose something they like or ask questions about a strain. This simple shift away from a menu-based dispensary instantly changed the way people thought about purchasing cannabis. Hill and Kessler were ecstatic.

“I’ve had an amazing life so far and now am blessed to have a wonderful wife, three awesome kids, a rock ’n roll band, and one of the coolest side projects ever: a cannabis store,” he said.

Design
“Initially, we were faced with a challenge,” noted Hill. “The place was just a very ordinary warehouse in a business park, but that became a blessing in disguise. No one expected to see something special there, so we had the element of surprise on our side.

“After framing and sheet-rocking the walls, we had this amazingly simple space with polished concrete floors, high ceilings painted black, and these big, blank, gallery-white walls.

“The decision to put each grower in their own box was my partner Steve’s idea, along with wrapping the boxes and counters with palette wood,” he continued. “This design was not only Bainbridge chic, but it was also very economical. Big Edison bulbs hang down over the counters, almost like idea bulbs, with cool and distinct patterns. The last piece that really brought the shop floor together was the twelve-foot elm table we installed.”

“I’ve had an amazing life so far and now am blessed to have a wonderful wife, three awesome kids, a rock ’n roll band, and one of the coolest side projects ever: a cannabis store.”—Brendan Hill, co-founder, Paper & Leaf

Budtender requirements
“We were very lucky in the beginning,” Hill said. “I think we hired eight out of the first ten applicants. Being a budtender—or salesperson, as we prefer to call it—is all about being able to read people. They also have to be friendly, attentive, hardworking, and able to handle pressure, as well as knowledgeable about all i502 rules and regulations.”

POS system
“We use Greenbits, which is terrific,” Hill noted. “It gives us the ability to examine and export reports on basically every metric of our business, from [cost of goods sold] to profit margins, customer loyalty, sales and discounts, and inventory management. Most importantly, the system keeps us compliant with tax collection and payment.” 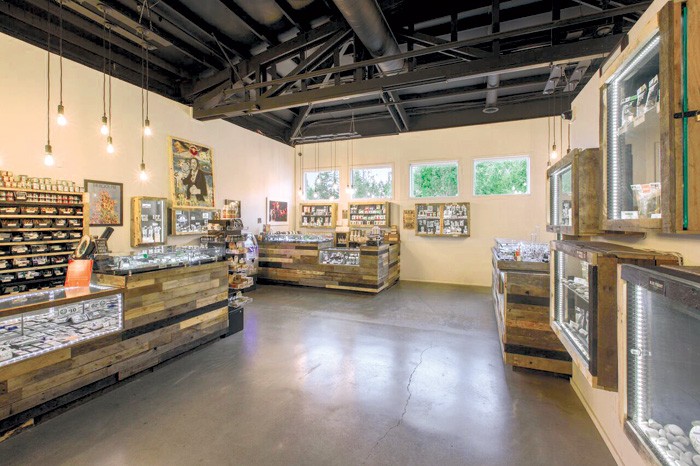 Challenges
“There have been many,” Hill said. “Negative stigmatisms have been hard. We knew when taking this industry on that we were in for an uphill battle. The previous perception of cannabis was in line with what one would expect of a Schedule 1 drug: criminal and dangerous.

“Regulations and the constant state of flux they continue to be in have been tough,” he continued. “We are constantly readjusting and pivoting aspects of our business to align with whatever the latest restriction may be. And, of course, the 280E tax regulations. Not being able to deduct expenses from income, except for those considered cost of goods sold, is very challenging for a business.”