According to new data, marijuana sales in Washington state are highest on Fridays.

Headset, an analytics company for the marijuana industry, has used point-of-sales data to shed light on the purchasing habits of Washington state consumers. They analyzed 30 percent of all legal marijuana transactions in Washington.

Sales also varied based on the time of day. Headset found that marijuana sales were highest between 3 and 5 p.m. (28 percent). The second-busiest time was from 6 to 8 p.m. (25 percent). 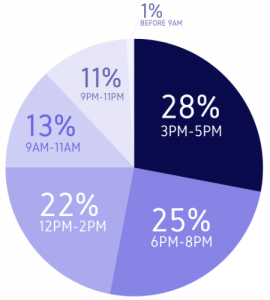 Headset used the term “baskets” to classify an entire order – like “shopping cart” is used online. Each basket could include a combination of flower, edibles, and all other marijuana products available for purchase in Washington shops.

The average basket cost a consumer $29.64. The median basket cost approximately $20. “It’s clear that this average was driven by larger baskets,” according to the Headset study. A total of six percent of the baskets sold were valued at over $75. Approximately 20 percent of baskets ranged from $5 to $10.

Headset also found that lower-cost baskets were mostly comprised of pre-rolls and flower. Fifty-five percent contained only one item. The most popular amounts of flower purchased were one gram and 3.5 grams (1/8th). Friday baskets were more likely to contain edibles and infused beverages.

Overall, the median consumer spends $850 per year on marijuana products. Fifty-seven percent of Washington marijuana consumers spend over $660 per year.

The importance of sales data will likely increase, as the marijuana industry seems poised to grow significantly. Five states will vote in November on legalizing recreational cannabis use, while four more will vote on medical marijuana.