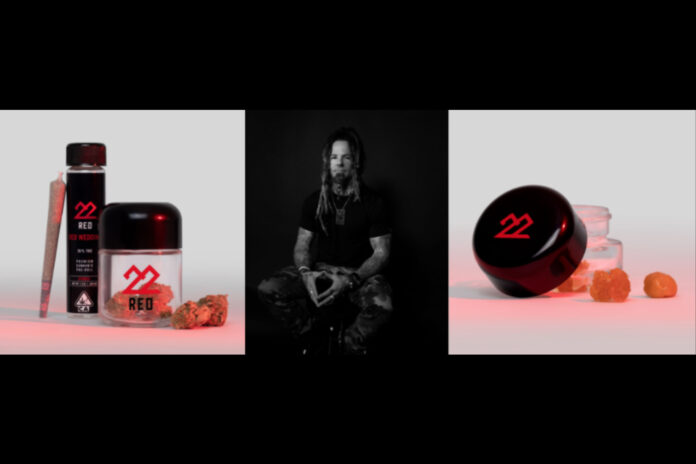 LOS ANGELES – 22Red is proud to announce that Logan Mader, founding member of the band Machine Head, has joined their team as the new brand ambassador of the west coast. Mader will join founder and longtime friend Shavo Odajian of System of a Down to push the boundaries of what is possible in cannabis cultivation, production, and market presence. “I’m very excited to welcome my good friend Logan Mader, who is also an amazing musician and artist to the 22Red team,” says Odajian.

Outside of Machine Head, Mader’s 25 years in music includes his current group Once Human, serving as the touring guitar player for Soulfly, producing albums for Five Finger Death Punch, Gojira and others, in addition to a multitude of other projects. Earlier in his career, an up and coming band called System of a Down opened for Machine Head and Mader and Odajian had an instant creative connection. The collaboration between the two was a long time coming with Mader saying, “22Red is not a typical celebrity weed brand. Shavo is so hands on. His knowledge about cannabis genetics, breeding and cultivation is legit. The fact that he’s an artist in so many ways, a painter, musician, video director, sculpture, all of that trickles into the 22Red brand.”

22Red first entered Mader’s home market of Nevada in July of 2020; since then they are available in more than 40 dispensaries with their top notch flower, concentrates and Sunkissed Flower. “I’ve been watching 22Red since they launched a few years ago,” Mader says, “I’m excited to be their boots on the ground in Nevada and to bring the networking, creativity and clout for 22Red to become the number one brand here.”

The brand is also available in California and Arizona, making it one of the few multi-state cannabis brands. In embrace of the growth, their social media presence will switch over to the handle @22Red with high ticket prize items being raffled off on their Instagram on the 22nd of every month of 2022. Between the expansion into other states, Mader joining the team, new offerings in the wings, giveaways and plenty of other upcoming exciting news, 2022 has been marked by the brand as the time to take notice and be exposed to truly the best cannabis offerings on the scene.