Vatra sees a sweet future for its Skunk line of stylish, discreet bags.

In our dreams, broken glass may represent disappointment and negativity. For those who have shattered their favorite pipes, the sentiment is remarkably similar.

Protecting expensive glass seems like an obvious necessity, but not everyone is comfortable slinging an obvious paraphernalia holder over their shoulder. Many cannabis apparel and accessory companies do not place an emphasis on fashion and discretion. Vatra does.

The term Vatra means “fire” in Romanian, but the word often is used to convey passion. Alise, Vatra’s founder and chief executive officer, certainly brings passion to his company’s extensive line of products.

“Neutralizing odors is an integral part of where the industry is going.” —Alise, founder and CEO of Vatra

Alise grew up in Eastern Europe. His family did not have the resources to finance his dreams. He learned early he had to be creative if he were going to get what he wanted. “In order to express myself and be creatively different when I was a kid, I had to design my own clothes,” he said. He would buy used clothing and materials in order to make his own T-shirts, jeans, and other garments. 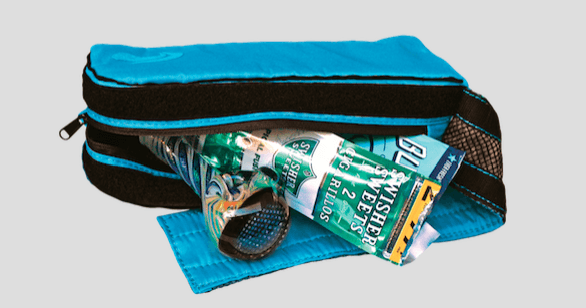 The early exposure to design quickly expanded into entrepreneurship. “By the time I was 18, I had my own clothing company where I made leather jackets and uniforms for dancers and celebrities in Europe,” he said.

Two years later, in 1994, Alise moved to Los Angeles and quickly adjusted to the city’s culture. “Coming of age in L.A., I spent a lot of time surfing and working odd jobs,” he said. He worked as a lifeguard in Santa Monica but always kept an eye on design.

“In the 1990s, I began working with Hookah Brothers,” he recalled. His time at Hookah Brothers was his entry into the smoke-shop industry. When friends suggested he create bags and cases for glass pieces, he began designing fashion accessories.

Alise noticed a severe market need. Not only was there a shortage of protective cases and bags, but also the available items reflected the “stoner” stereotype. Sure, consumers could find hemp jewelry and hippie T-shirts, but Alise wanted “to make something you would actually want to wear.”

Thus, Vatra was born. In 1997, he and his team conceived and developed products in preparation for the company’s hard launch in 1999. Alise saw the big picture during a time when many companies were living in the moment. Only recently legalized by the passage of Proposition 215, the cannabis industry was in its infancy. Most patients had not yet begun seeking discreet ways to carry their medicine and protect their accessories.

Vatra is a veteran among companies in a young industry. The vast majority of Alise’s employees have been with him for more than ten years. He realizes a company is only as good as its team. “We have great designers and a unique team of people. We look at [Vatra] as a family,” he said. 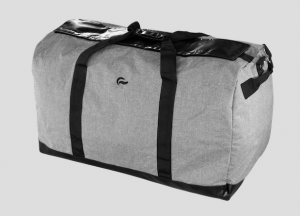 The concept of family extends to companies with which Vatra does business. Vatra sells products nationwide and tries hard to maintain great relationships with retailers. “We back up all of our products with a warranty,” Alise said. Vatra’s “no dust policy” sets it apart from competitors and cultivates good karma with shop owners. “If a product collects dust on the shelf, let us know and we will take it back,” he said.

From its inception, Vatra’s mission has been to create a range of quality products. The company’s current lineup demonstrates dedication to that goal. Vatra offers dozens of bags, cases, and protective capsules for glass. The company also produces smell-proof containers, vaporizer bags, and pocket cases for accessories. Producing so many unique products can be challenging. “Sometimes I wish we only had a handful of products,” Alise joked. 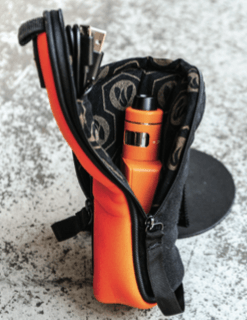 One of the most recognizable lines is a collection of tube bags designed to protect bongs. Other companies offer similar items, but Vatra’s tube bag is unique. “We have a patent for our particular design,” said Alise. Tubular pockets are sewn together and the inside is hand-stuffed with a cotton-like material to offer maximum protection and minimize odors.

Alise is now looking to the future. Most people working in the cannabis industry realize the market is changing, but not everyone is preparing for the inevitable market shift. As cannabis becomes woven into the fabric of mainstream culture, consumers are seeking out accessories that match their everyday needs.

Vatra aims to meet the new industry’s needs with its newest line of products, Skunk. Ironically, Skunk was conceived to eliminate odors, but consumers want to wear the fashionable bags daily, not just to a cannabis convention or a smoke session. “I wanted to create a line of accessories that someone could take into a professional setting,” said Alise.

“When the economy is bad and people are still bying our bags, you feel the love and gratitude.” —Alise, founder and CEO of Vatra

While Alise is proud of Vatra’s success, he insists the company evolve with the industry. Eventually bags “can become smelly,” he said. Most protective cases for cannabis products undoubtedly will encounter flower, resin, ash, and dirty water. “We feel that neutralizing odors is an integral part of where the industry is moving,” he said.

After testing compounds and materials from around the world, Alise and his team believe they have devised a perfect system for eliminating odors. Skunk bags are made with a more effective kind of activated carbon, according to Alise. “I have seen fabrics that look identical. One may cost two dollars per square meter while ours costs about $10,” he said. “Both can be called activated carbon, but ours is of superior quality.” 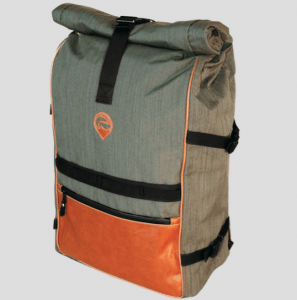 New Skunk products are on the horizon. Drug-sniffing dogs are not particularly friendly to fabrics, so Vatra has completed prototypes for a canine-proof bag. “The testing on the canine bag is going very well,” Alise said. He expects a design to be ready for the market by the spring or summer of 2017.

Even as Alise is excited about the future, a specific period in his past seems to motivate him the most.

“Even in the darkest economic times during 2008, our customers kept us going; kept food on the table. I will always be thankful for that,” he said. “When the economy is bad and people are still buying our bags, you feel true love and gratitude. That is what keeps inspires us.”

How Are You Running a Business in 2022 without a CRM?