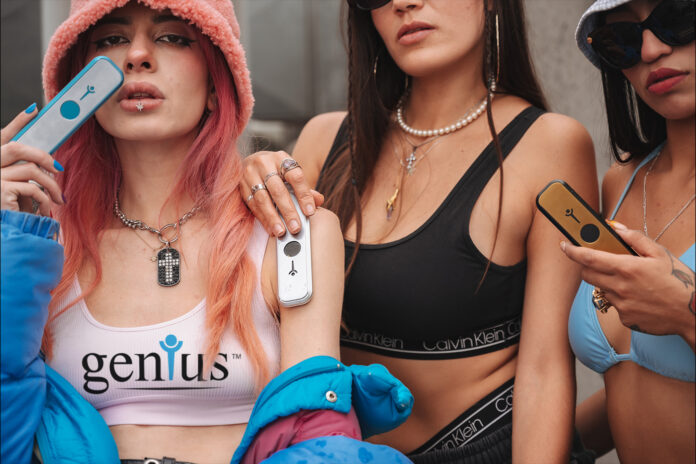 The definition of genius, according to Albert Einstein, is taking the complex and making it simple. That’s an apt description of the Genius Pipe, a decptively simple smoking device that uses the complex concept of fluid dynamics to cool smoke without losing taste.

But Genius Pipe’s creator, Dyan Ferman, initially wasn’t working on a pipe at all. Instead, his team was working on the world’s most advanced cooling system for keeping gaming computers from overheating while at top speed. For this, they offered a novel method of using dimples to recreate boiling effect (nature’s fastest way to remove heat), but at normal temperature.

To accomplish the feat, the team crafted a specially designed dimpled surface that created thousands of tiny tornadoes, each generating millions of micro bubbles and mimicking the boiling process. Similar principles also are applied in some of the most advanced supersonic jets and nuclear power plants.

Being a smoker himself, Ferman figured the same concept could be applied to an “air-cooled” pocket-sized pipe. To test his theory, he took the CPU cooling block from a computer his team was working on, rigged a bowl to one end and a mouthpiece to the other, and took a drag. “It worked amazingly,” he said. “We were stunned by the effect.”

Having no liquid and no electronics translated into a deceptively simple device. The Genius Pipe is made from three rectangular-shaped pieces of anodized aluminum and steel held together with strong magnets. It measures six inches in length, making it truly pocket-sized and portable. The two main sections contain the dimples—2,000 of them, to be exact. 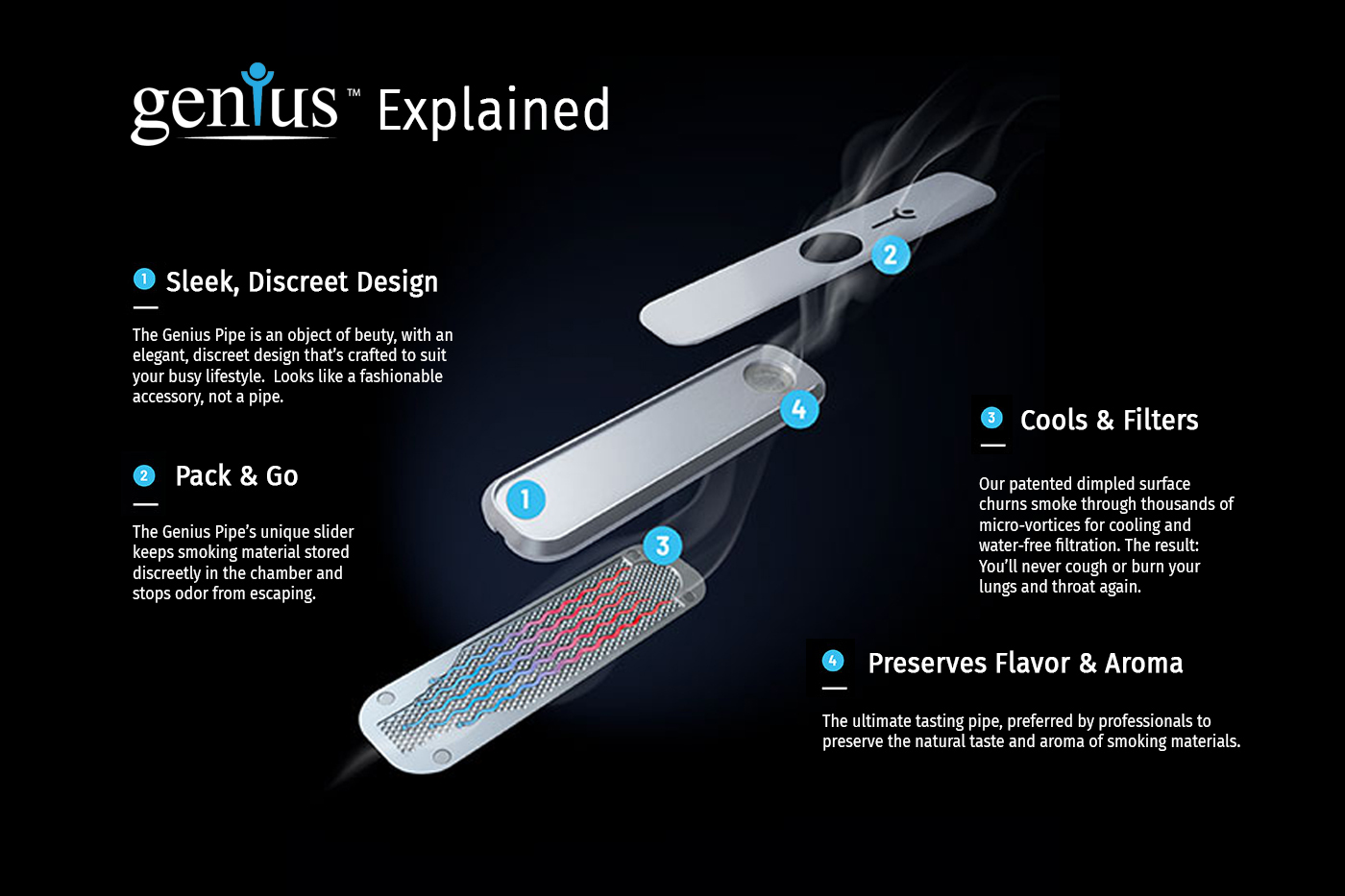 The pipe’s sliding cover features a Genius logo cutout and a round hole that can be slid forward to open the bowl for use, or back to close off the bowl. Closing the slider allows the user to store smoking material for later. It also instantly extinguishes the flame, so no flower is wasted after taking a hit. This feature means the Genius Pipe, which typically retails for between $75 and $120 depending on the model, pays for itself very quickly with the money saved on previously wasted cannabis.

When the precision-cut pieces are snapped together, an air-flow route is created between the bowl and the mouthpiece (nothing more than a small slit at one end). The dimples not only cool the smoke, but also catch tar, oil, and sap. When the smoke finally reaches a user’s mouth and lungs, it is remarkably cool, smooth and cough-free.

The Genius Pipe was launched at a CHAMPS trade show in 2015 after being in development for six years. The company had a small table on the edge of the show floor without any of the fanfare associated with the established brands in attendance. It didn’t take long before people began saying to one another, “Did you see that metal pipe thing? It’s amazing.” Crowds began congregating around the Genius booth to get a glimpse of the revolutionary device.

“The reaction was that the pipe was unlike anything else, and people were amazed that it worked exactly as we promised,” Ferman said. “I came away from the show confident the product was going to be a hit.” Since then, Genius has evolved into a cannabis lifestyle brand with a range of carefully curated products for cannabis users. More recent additions to the line include the Genius Mini, which is exactly what it says: a smaller version of the original. New in 2020 are the Genius Smell Proof Backpack, the Genius Fresh scent (which completely eliminates cannabis smell in fifteen seconds), Genius NON-Flammable cleaner, the Genius Party Bowl, and the Genius Water-Free Dab Rig. 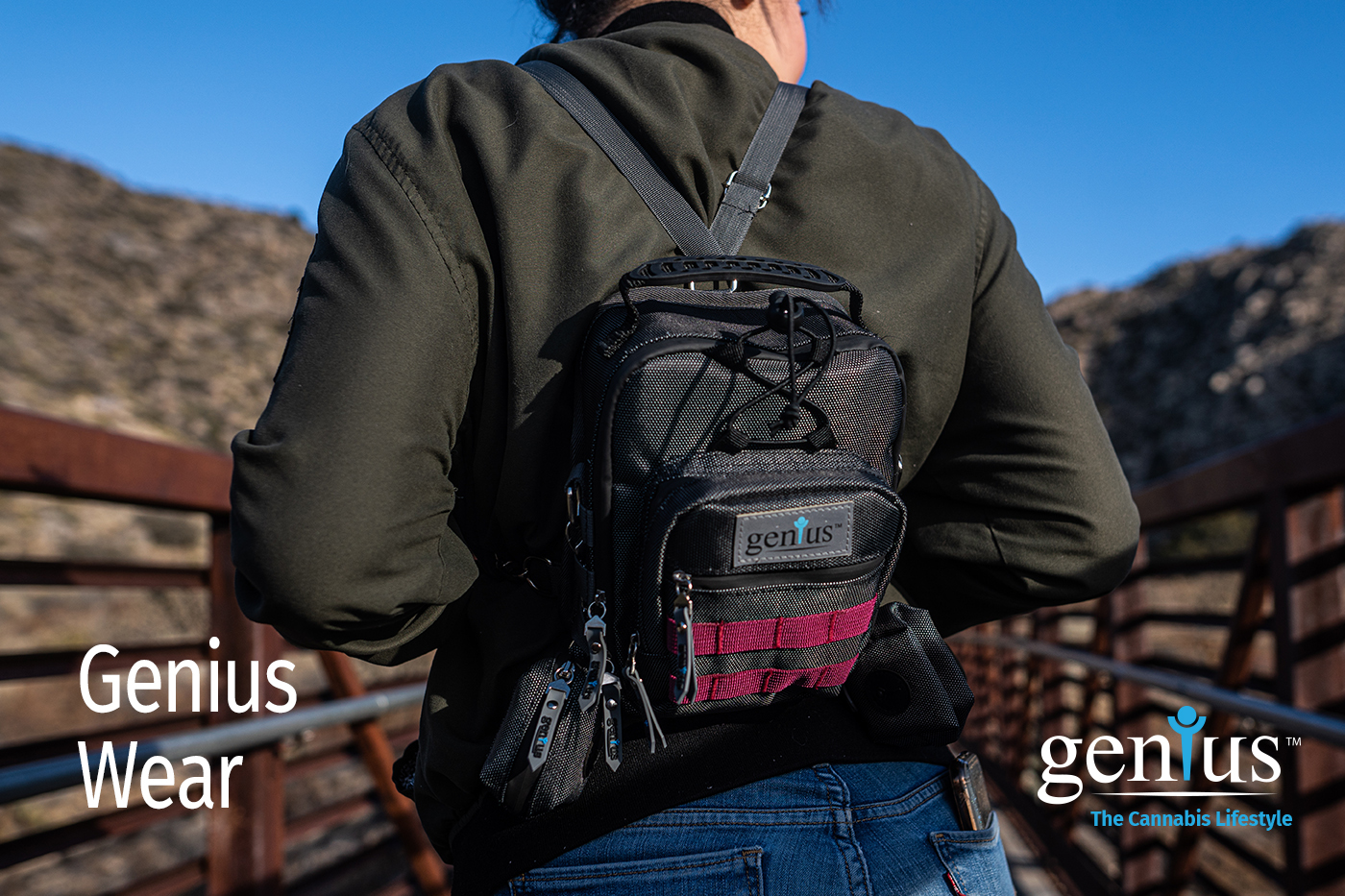 Although the first incarnation of the Genius Pipe was available in only a handful of finishes, the form of the device provides a blank canvas for unlimited colors and graphics. Many of the custom designs are inspired by musicians, celebrities, and artists like live-painter Sean Dietrich, who created several limited-edition designs, most recently in November 2020.

Genius also collaborates with like-minded brands within the cannabis industry. The company recently teamed with V-Syndicate on a sliding lid with built-in grinder and with Vatra on a custom-designed protective carrying case. Another exclusive partnership is an elegant wooden RYOT humidor box featuring chambers for a Genius Pipe, grinder, and accessories or smoking material. 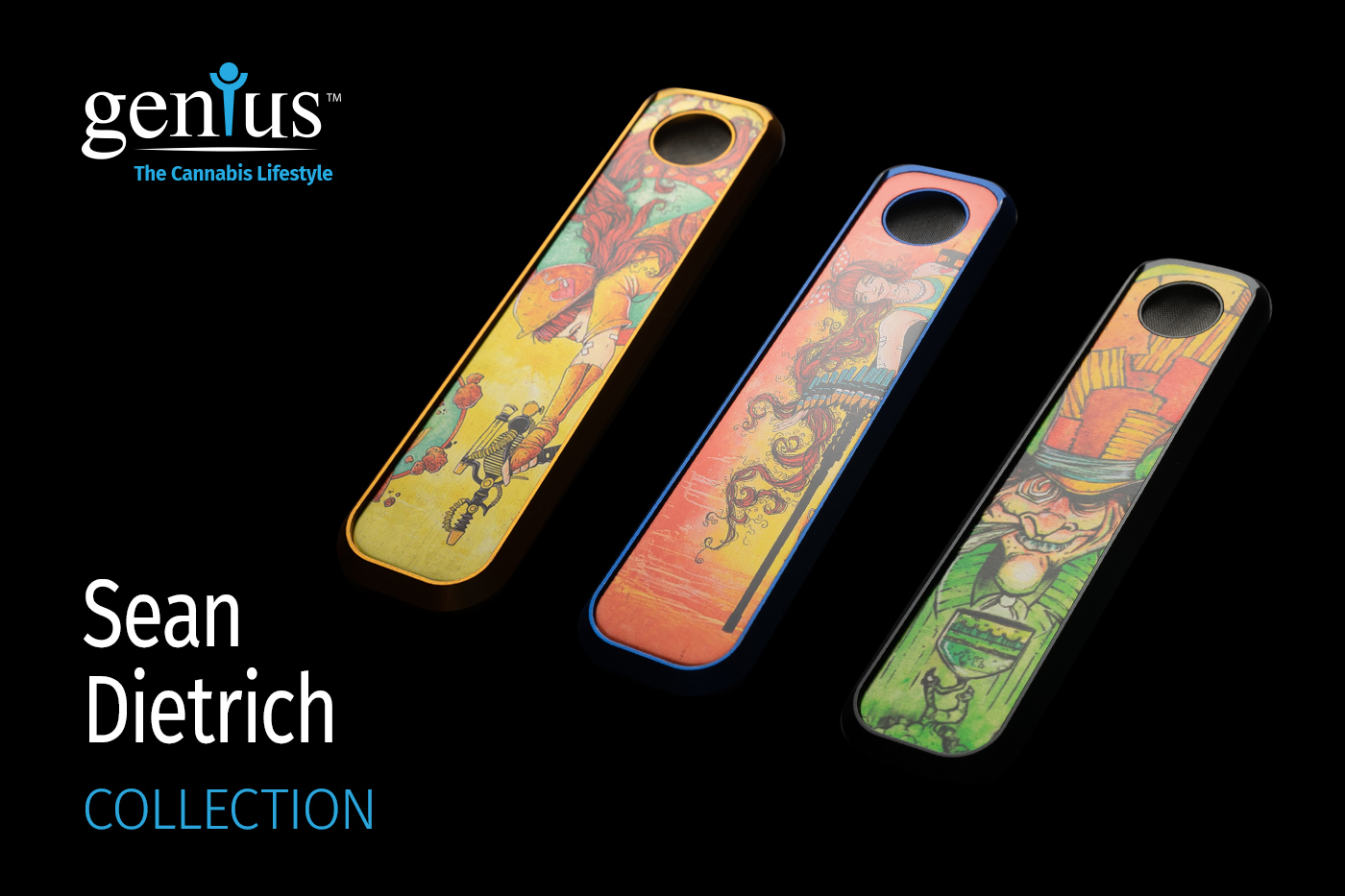 Ferman positions the Genius Pipe as a premium product. That’s not outrageous at all, especially considering precision-engineering from high-quality aluminum and minimal parts make the Genius Pipe virtually indestructible. As such, it is warrantied to the original owner against manufacturing defects in materials and workmanship for the lifetime of the product.

“We’re in a category by ourselves,” Ferman said, “because there’s nothing else like it. It’s not a vaporizer, bong, or pipe like any other.”

Genius Pipe has received glowing reviews from the biggest names in the smoking industry. High Times called it “revolutionary.” GQ said, “One of the best ways to make an adult-acceptable pipe? Make sure it doesn’t look like a pipe at all.”

And Herb, the self-proclaimed “voice of cannabis culture,” described the Genius Pipe as “science meets art.”

As the buzz about Genius Pipe has gotten around, a community of fans has surrounded the innovative little device. In the same way the Apple brand puts emphasis on customer experience by enhancing a sense of community among Apple users, Genius smartly plays on the loyalty customers tend to develop when they have successfully tried and tested a product. The company rewards its followers with exclusive Genius Karma currency tokens that can be traded for exclusive accessories and products. 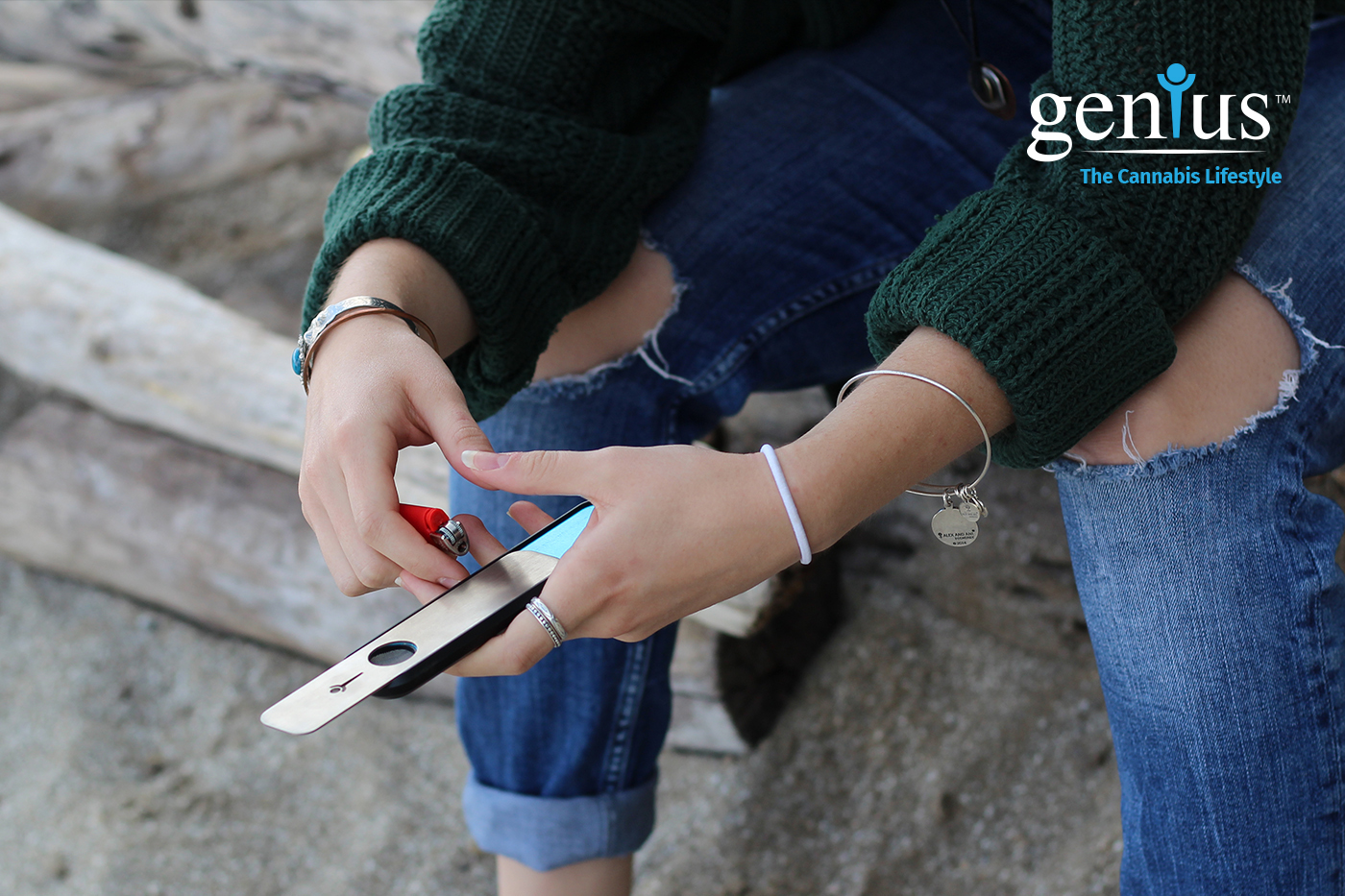 The Genius community extends to retailers as well. Genius has created a powerful Authorized Dealer Program, which provides retailers and distributors with the structure and tools they need to drive sales. When dealers join the program, they receive training for their sales teams, marketing and display materials to help tell the brand story to customers, and free access to customized social media content they can use to engage consumers. Genius often provides products for in-store giveaways and contributes to co-op advertising buys for top accounts.  Retailers and dispensaries can custom-brand pipes with their own logo and artwork using either a full-color print or elegant engraving, making the pipe a marketing tool in itself or a memorable corporate gift or company swag. 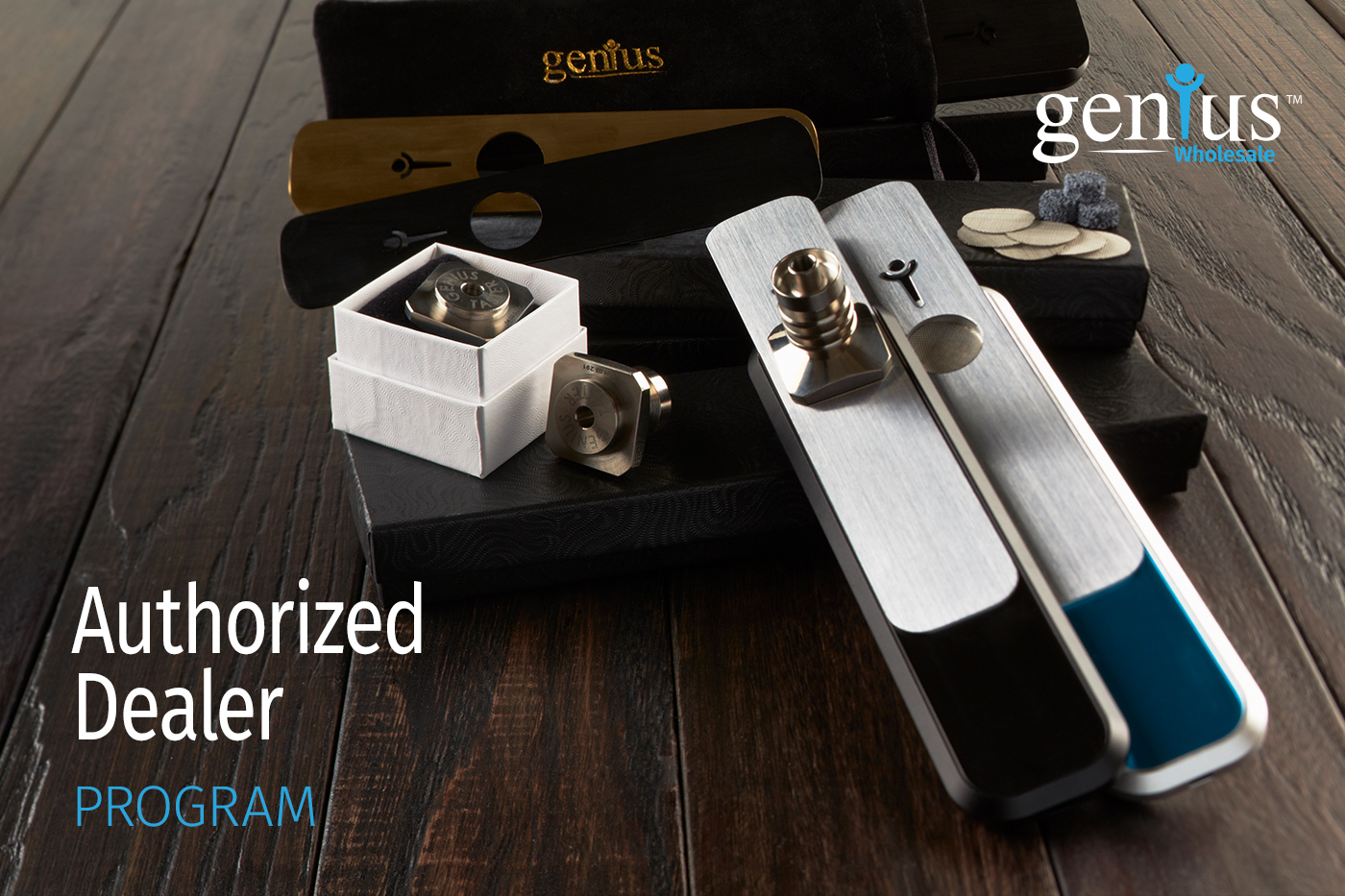 “What I enjoy most about being involved with the cannabis industry right now is that everything is so new, and people are all about sharing their passions,” Ferman said.

“Genius Pipe is in existence because of an idea,” he added. “You could say we’re building a brand but, more importantly, we’re building a phenomenon and concept of a product that’s constantly evolving around the consumer. There’s no name on the pipe, only a logo. It belongs to the end-user, and we want it to become something they couldn’t imagine living their life without.” 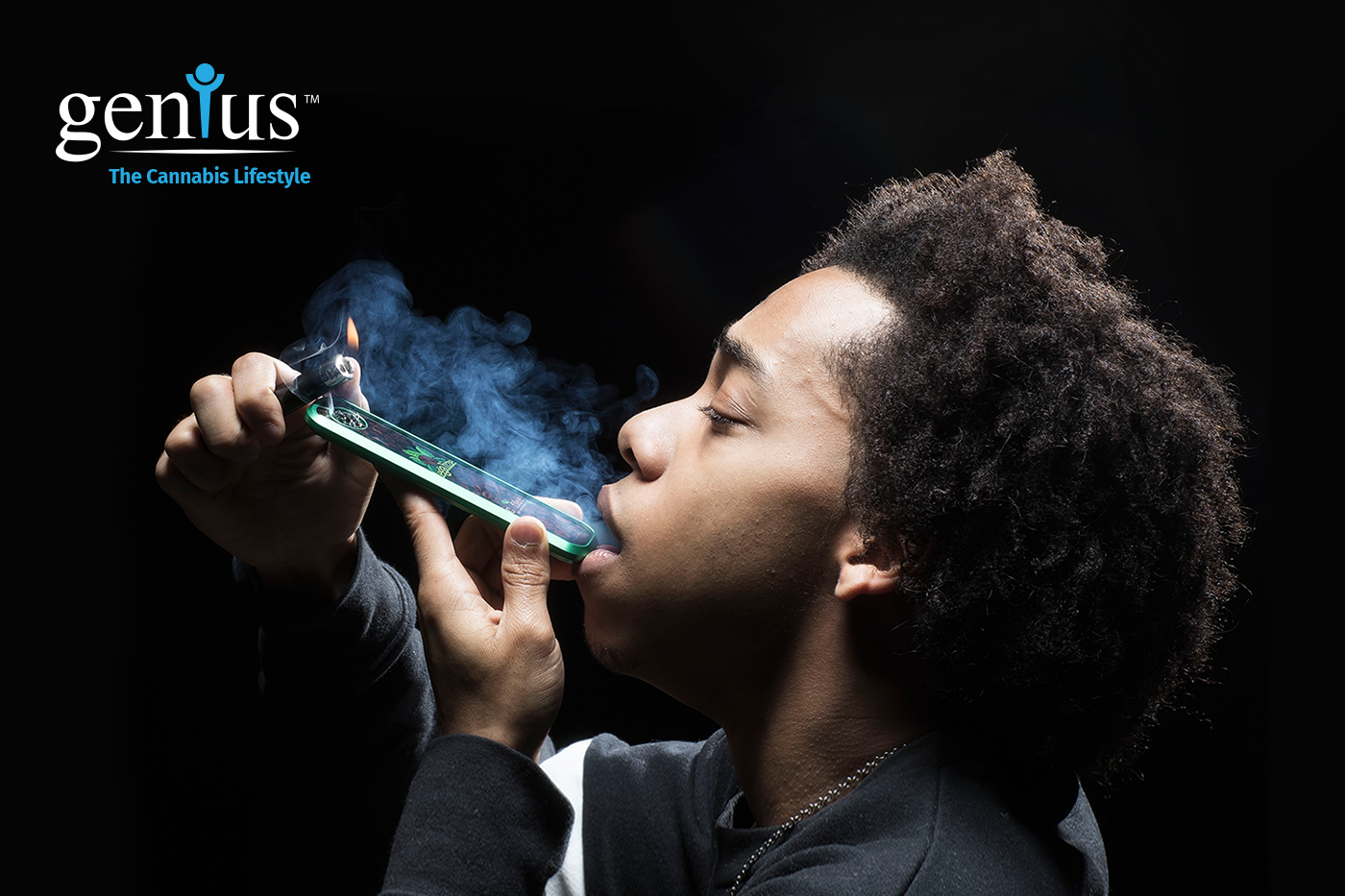