You know that sound like an elevator at the beginning of Pink Floyd’s “Welcome to the Machine?” Imagine that sound as the elevator comes to a stop. Bright, white doors slide open. Swish, thunk.

Step through the airlock into a control room populated with a few agricultural techs in white bio-contagion coveralls. A digital control panel pings and blinks, monitoring and adjusting levels, ultra-efficient, sleek, and modern. A huge window looks onto the grow room, stacked floor-to-ceiling with racks of trays planted with cannabis clones. Or arugula. Or spinach. Or strawberries. The rows and rows and rows, tended by automatons, grow in perfectly sterile conditions.

Previously, success in any agricultural sector has depended on variable conditions including soil quality, weather, location, pests, possibility of blights, and the wild whims of Mother Nature. Now, all those variables can be controlled inside “smart farms.” Hooked into the Internet of Things, grow spaces are getting on WIFI, receiving their own brains, and starting to talk.

“We’re involved in a couple of projects that are highly automated, which are for food production—leafy greens, lettuce, micro-greens. This definitely can cross over with the cannabis space as well,” said Ted Tanner, founder of Denver-based Growlink. “I just left a facility where everything that’s growing is 100-percent automated, so people never enter into the room. That already eliminates any need for pesticides, right? No contaminations. It has positive air pressure, so nothing can come into the room and no people are going in to introduce anything.

“This system goes up fifteen layers high,” Tanner continued, “and an elevator and robot actually grab these pods, bring them down, and put them on a roller in front of people, and that’s where they actually harvest it.”

Called “vertical farming,” environmental controllers are integral to these brave, new grows. In the post-modern agricultural era, commercial cannabis crops are controlled with modular hardware connected to software platforms that form a digital communication network. Though the technology has been under development and in use for some time, especially in Europe, controllers are set to change the way the United States looks at traditional farming—and cannabis may be accelerating the process. 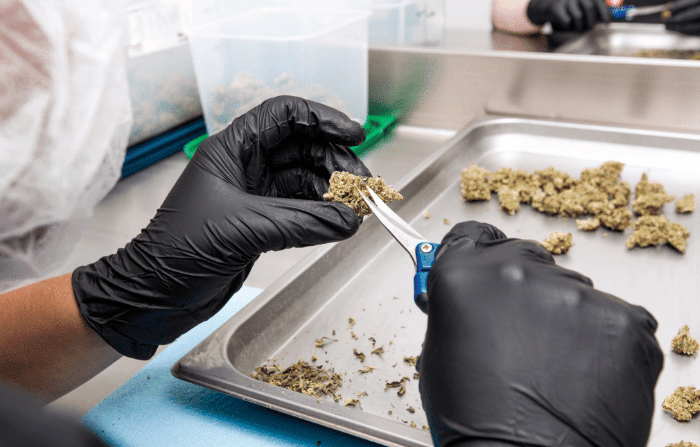 If Your Farm Only Had a Brain

“The SmartBee system is a wireless network that creates a wireless mesh network and so, for all intensive purposes, it’s a wireless, network-based controller,” explained SmartBee Marketing Manager David Aragon. “It integrates all your grow appliances into one easy-to-use application. We’re a complete grow-room solution.”

The controller market already is competitive. Both SmartBee and Growlink were founded with the cannabis industry as the basis for their business model. Long-established industrial horticulture suppliers also see a new vertical in commercial cannabis. Companies like Argus and Priva have been in the space for decades, developing their systems with traditional greenhouse crops.

“We refer to [the system] as a platform,” Tanner said. “There are a lot of controllers out on the market. There are timers you can buy for lights, competitive controllers that can monitor temp, humidity, and C02. We’ve created a platform that is both hardware and software that’s tightly integrated, all developed here in Denver, Colorado, and built here in Denver. You’ve heard the term ‘smart home.’ This is about making farms extremely smart.”

MedMen Director of Ag Technology and Systems Damian Solomon described the situation from a grower’s point of view: “There are differing levels of control and automation available in cultivation systems, and as you increase the technology used you gain more precision control over the environment, which optimizes output and efficiency.

“[Required] from any system is management over climate, temperature, carbon dioxide, humidity, irrigation and fertilization, lighting, shading control, and others,” he said. “MedMen uses the Dutch company Hortimax’s integrated control systems. They have more than fifty years of commercial horticulture experience.”

The MedMen grow facility in Sun Valley, California, has 4,100 square feet of canopy space and a fully integrated controller system. According to their calculations, crop yields are up to 50 percent more per square foot than comparable “legacy” or more traditionally operated facilities. 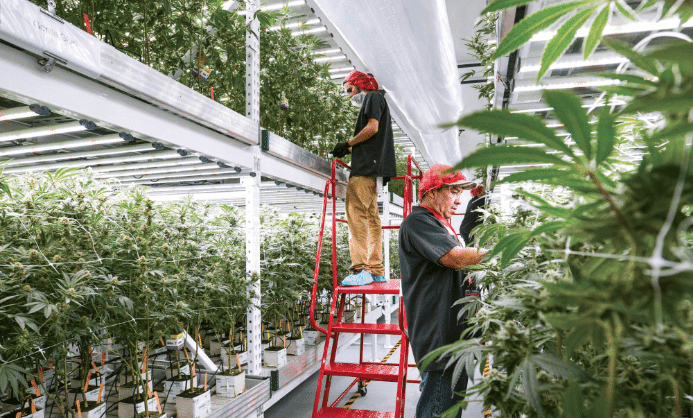 From Here to Infinity

Tanner said Growlink’s system is more optimal for spaces 2,000 square feet or larger and can be expanded simply by adding more modules to create a larger network.

Smart Bee’s Aragon explained company founder Skye Hanke’s background in cannabis cultivation. The company designed its as a simple solution for growers, and can be scaled to accomodate everyone from small growers to large cultivation facilities.

SmartBee’s system software has an Android- and IOS-compatible integrated app that enables growers to be connected to their crops around the clock, though once a grower sets rules, the system operates automatically to correct any issues detected and documents any changes. It even can send alerts. Historical data is stored with cloud services.

“What you get is peace of mind and inside communication with your plants you otherwise would not have the advanced knowledge to know about,” Aragon said. “Now you have a system that has this visibility to it, and it puts you on a different level. You’re now using your system to make educated decisions to get a better outcome, and that’s a benefit for any size grower.”

“A valuable part of our platform or solution is the software,” Tanner said. “You have to have all the hardware to collect the data and control stuff, but where farmers find the true value in our system is to be able to easily get to the data they need, set up rules, and control things—but really, looking at historical data, to make improvements harvest after harvest, and being able to increase yields, and reduce nutrient use and cost.”

As cannabis perhaps becomes a federally legal commodity, consistency, cost reduction, and a focus on the bottom line will be imperative. In fact, they already are. Controller systems, proven effective in traditional horticulture, could help create the precise platform needed for cannabis to become a global crop.

Another driving force behind innovations, indoor cultivation, and advanced agricultural technologies is the direct result of the failure of some traditional farming methods. Environmental damage including soil depletion, pollution from pesticides and fertilizers, loss of threatened environments, and a long list of other ills have combined with climate change and growing populations to take traditional farming to the tipping point.

“We find that California, even though they don’t have their entire book written yet on requirements for commercial cultivators, a lot of the early information that we’re getting and we’re being asked for from people out in California [concerns] power consumption,” Tanner said.  California growers want to know “how to reduce power consumption.”

“We do a lot of greenhouses in Northern California, and being able to use the sun when you can and only supplement lighting when you need to, or use shades to reduce heat versus HVAC” is important, he continued. “Also precision watering—using moisture sensors to water just the right amount, so you don’t have runoff. In those aspects, we are [eco-friendly]. We’re reducing the amount of water used, reducing fertilizer use and energy used for lighting.

“And if you dial in all of the variables where they need to be with consistency, it definitely can reduce the need for pesticide use,” Tanner added.

The trend toward locally sourced food again leads to the intersection of traditional and cannabis crops, since currently cannabis must be produced within the states where it’s legally sold.

“We do a lot within containers,” Tanner said. “CropBox uses our products. Modular Farms is another. Cubic Farms uses our product. Another one that’s getting a lot of publicity that’s looking at our product to put within their farms is Plenti. They just raised $200 million [in venture capital funding].”

“I definitely see, and have seen and we’re working with, companies that are really believing in growing food near major populations, and that’s happening indoors and in greenhouses,” he added. “[Putting] these farms near populated areas, so there’s not a lot of traveling. If you live in New York and your lettuce comes from California, it kind of doesn’t look so good by the time it gets there.” 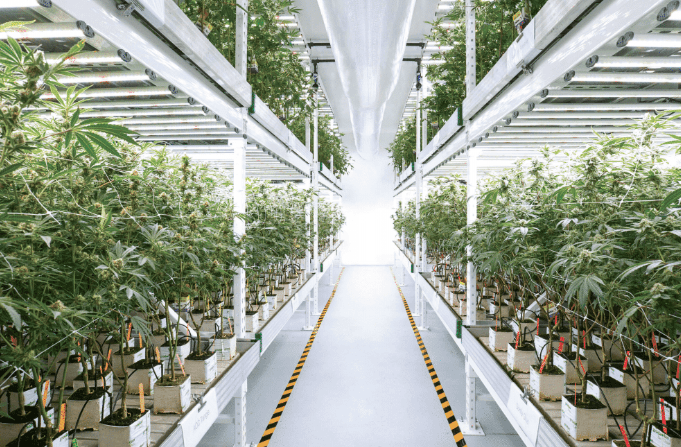 Never fear, lettuce lovers of New York. Tanner said some of the large cannabis cultivators he knows also are thinking about expanding into other crops. And MedMen has you covered. They already have a grow facility located in upstate New York, and are in the process of opening a dispensary, which will be located in Manhattan.

“As multi-state operations expand, consumers will begin to expect the same customer experience wherever they are,” MedMen’s Solomon said. “By having a system in place that delivers consistency and uniformity, cultivators can meet those expectations.” 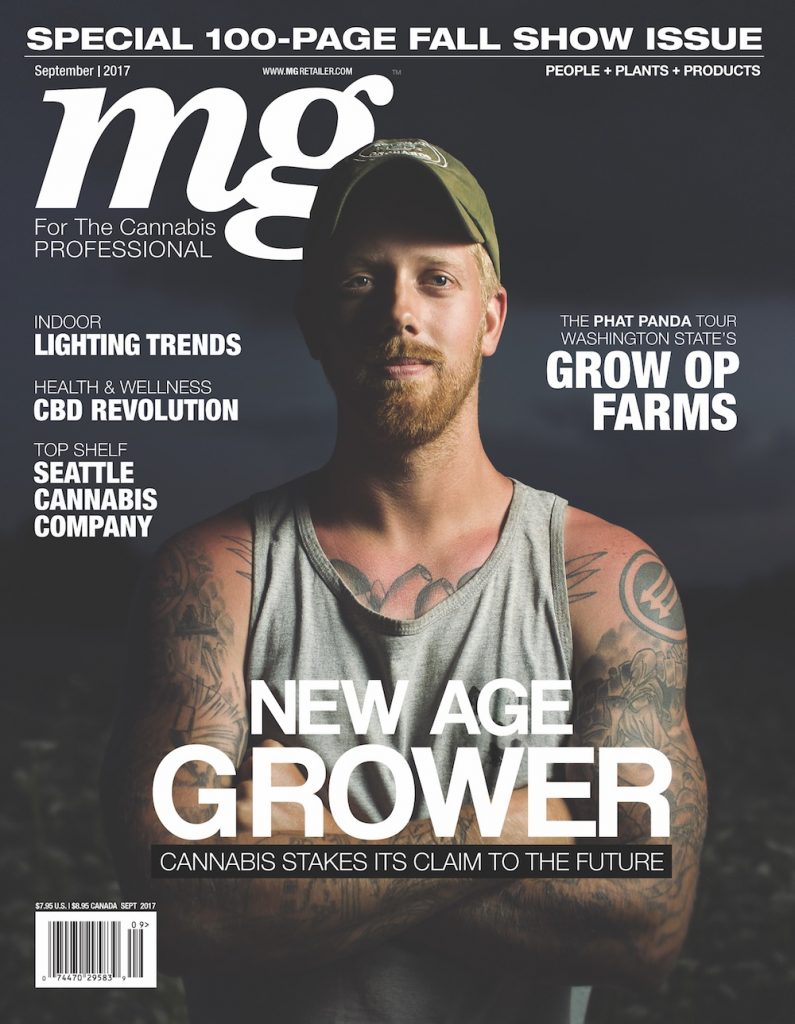